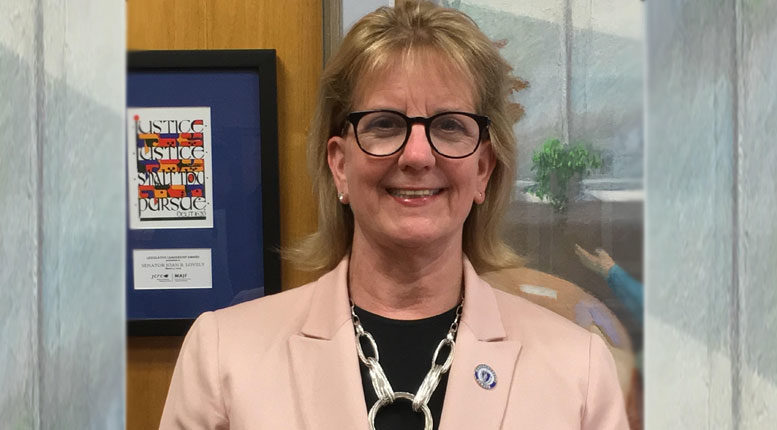 By: State Senator Joan B. Lovely*/Special to TRT—

Anniversaries offer appropriate opportunities for reflections about accomplishments and recommitments to progress. We think that we live in tumultuous times today, but the Stonewall Riots (June 28) and the first lunar landing (July 20) took place less than one month apart during the meaningful summer of 1969. The latter event marked a technological marvel; the former represented a civil-rights milestone by demonstrating a growing group of people would no longer passively accept discrimination on the basis of sexual orientation.

“The arc of the moral universe is long, but it bends toward justice.” Dr. Martin Luther King and President Obama popularized this powerful saying, which should not suggest that justice advances in a constant fashion. While civil rights in our Commonwealth and the United States have clearly progressed over the last fifty years, we have also seen a countervailing and deeply troubling increase in hate mongering. Elected officials at all levels of government must condemn discrimination in all forms and seek to pass laws that would equalize opportunities for all members of our society.

Massachusetts legalized same-sex marriage fifteen years ago. Today, LGBTQ residents of the Commonwealth enjoy more protections than they have ever had before. But important inequalities remain. The Legislature has righted some civil-rights wrongs but has many more waiting for redress.

In March 2019, the Massachusetts Senate and House of Representatives and finally passed a bill outlawing conversion therapy, an odious practice predicated on the noxious notion that people attracted to others of the same gender have some fundamental flaw that a licensed professional could fix. I am proud of the leadership roles that Senate President Karen Spilka, Senator Mark Montigny, and Senator Julian Cyr played in banning conversion therapy.

As the Senate Chair of the Rules Committee, I had an opportunity to shape the language of the final bill that came before the Senate and to speak for the bill when my colleagues and I debated it. The omnipresence and wise counsel of critical allies like the Massachusetts Gay & Lesbian Political Caucus helped drive this bill over the finish line.

Many of us rightly celebrated the result, but we should not forget the obstacles and pitfalls we evaded and overcame on the road to victory. The bill took too long to pass. Too many residents of the Commonwealth used the spotlight on the bill as an excuse to spout hateful homophobic rhetoric when contacting the offices of their elected officials. The bill did not get the splashy public signing ceremony that it deserved, although thanks to Representative Kay Khan, a celebratory symbolic event took place at the State House during which backers of the new law could publicly proclaim their support.

In April, the Senate passed legislation allowing for a non-binary option for gender on drivers’ licenses and birth certificates. Under this bill, the Registry of Motor Vehicles must allow an applicant to designate an ‘X,’ rather than ‘M’ or ‘F’ on a driver’s license or other forms of state ID. The bill will also allow those over the age of 18 or the parents of a minor to request a change on a birth certificate to include “female,” “male” or “X” to reflect the gender identity of the person. In addition, the bill would also authorize a study to identify other state documents or forms that should also reflect a non-binary gender option.

I take pride in the more enlightened views and practices of Massachusetts that these two bills reflect, but pride is not enough. We should accept not making the perfect the enemy of the good, but we should continue to strive toward perfection. Not one of us should rest on our laurels so long as anyone in the Commonwealth – both inside and outside the LGBTQ community – suffers from discrimination.

Two of my newer colleagues have begun pursuing other ideas that could improve our laws. I commend Senator Joanne Comerford for filing a bill that instructs courts not to consider sexual orientation when determining offsetting circumstances for a homicide. Likewise, Senator Adam Hinds has legislation requiring the Massachusetts Commission Against Discrimination to include LGBTQ representatives.

I have had the privilege of serving in the State Senate since 2013 and have focused on helping some of the most vulnerable members of our society. This session, some of my priority bills include those that would prevent the sexual abuse of children and youth; amend the statute of limitations regarding criminal prosecutions for the crimes of sexual assault and rape of a child; expand access to adoption by allowing a brother, sister, uncle or aunt to adopt a minor relative; and create higher education opportunities for students with intellectual disabilities, autism, and other developmental disabilities.

Pride participants should enjoy the wonderful parades and the chance to celebrate so many successes. We have come a long way since Stonewall, but we have many more walls we need to break down to make our society more just. I look forward to working for and with the LGBTQ community to effect the changes that we all need and deserve.

* Senator Joan Lovely is in her fourth term as State Senator for the Second Essex District, comprised of Beverly, Danvers, Peabody, Salem, and Topsfield. Senator Lovely has been serving in the Massachusetts Senate since January 2013. She serves as Assistant Majority Leader, Chair of the Senate Committee on Rules, and Vice Chair of the Joint Committee on Education. Outside of her committee work, Senator Lovely is the Senate Chair of the Ellen Story Commission on Postpartum Depression and is a member of the Special Senate Committee on Opioid Addiction Prevention, Treatment and Recovery Options.