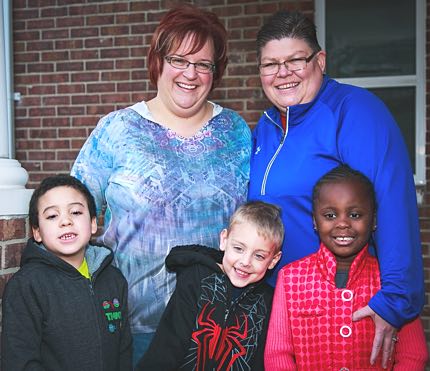 April DeBoer, on the left, and Jayne Rowse on the right with their children.
Photo: GLAD

April DeBoer, on the left, and Jayne Rowse on the right with their children.
Photo: GLAD

WASHINGTON, D.C.—Lawyers for Michigan nurses April DeBoer and Jayne Rowse, who seek to marry in their home state of Michigan, today filed their opening brief with the U.S. Supreme Court. The Court agreed to hear their case, DeBoer v. Snyder, along with marriage-related cases from Ohio, Tennessee and Kentucky this Term, potentially setting up a resolution to the country’s ongoing conversation about marriage equality which has now stretched over two decades.

DeBoer and Rowse are hospital nurses and the parents of four children they have adopted, two with special needs, two of whom were fostered first. They originally challenged Michigan’s adoption code so that they could adopt their children jointly and provide them the security of having two legal parents. They later amended their lawsuit to challenge the state’s marriage ban since it keeps April and Jayne, as well as the children, from being legally recognized as a family and from the protections other families enjoy.

“Marriage is a commitment like no other in society,” said Carole M. Stanyar, one of the attorneys representing DeBoer and Rowse. “We argue that when couples cannot marry, their families, including their children, are denied a fundamental freedom as well as the status, dignity, security, stability, and legal protections that marriage confers. It’s time to bring that injustice to an end.”

The couple’s brief can be viewed at http://nationalmarriagechallenge.com/the-case/court-docs/ or www.glad.org/work/cases/deboer-v.-snyder.

“This is a case that started because of April and Jayne’s concern for their children,” said Nessel. “Marriage brings stability to families. It tells children that they have, and always will have, two parents. For the children of same-sex parents, allowing their parents to marry dispels the notion that they are inferior. Marriage brings dignity to adults and children alike.”

After a nine-day trial in February and March of 2014, federal District Court Judge Bernard A. Friedman struck down Michigan’s ban on marriages and “any similar union,” concluding that “the guarantee of equal protection must prevail.” The state immediately filed an appeal. On November 6, 2014, the Sixth Circuit Court of Appeals overturned Friedman’s decision and those of courts in Ohio, Tennessee and Kentucky. All of those cases are now before the Supreme Court. [pullquote]“We are hoping that the Court will look at families like April and Jayne’s and conclude that denying them the freedom to marry violates our nation’s most cherished and essential guarantees,” said Bonauto.[/pullquote]

“We are hoping that the Court will look at families like April and Jayne’s and conclude that denying them the freedom to marry violates our nation’s most cherished and essential guarantees,” said Bonauto. “It is time to end the legal bans that single out same-sex couples for disrespect and instead allow them to make this unique promise to one another and provide greater protection and security for their families.”

Amicus briefs supporting the plaintiffs in the four cases are due to be filed by Friday, March 6. It is expected that oral argument will take place the week of April 27, and a decision is expected near the end of June.

Through strategic litigation, public policy advocacy, and education, Gay & Lesbian Advocates & Defenders works in New England and nationally to create a just society free of discrimination based on gender identity and expression, HIV status, and sexual orientation.  GLAD’s litigation in Goodridge v. Department of Public Health (2003) made Massachusetts the first U.S. state in which same-sex couples could legally marry.