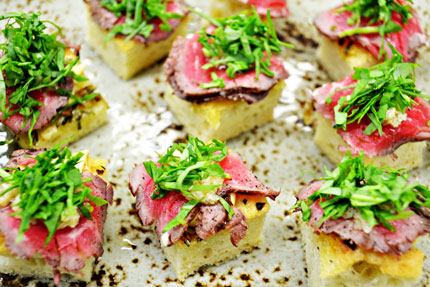 A dish to be served by Mistral Bistro at the 2015 event: focaccia with beef tenderloin, horseradish and arugula.
Photo: Mistral Bistro

A dish to be served by Mistral Bistro at the 2015 event: focaccia with beef tenderloin, horseradish and arugula.
Photo: Mistral

BOSTON, Mass.—The AIDS Action Committee (AAC) will host an evening benefit to showcase more than 40 chefs from over 45 different Boston neighborhoods at the 20th annual Taste of the South End March 3, 2015. The event will take place at the Boston Center for the Arts Cyclorama, and has served as a fundraiser for the organization since 1995.

“It’s a chance to bring people together who otherwise don’t have many touch points with the work of AIDS Action, and it’s just a brief moment to tell the story of where the HIV movement is today and the fantastic work happening by our staff with our clients,” said Carl Sciortino, executive director of AAC. “We have a real success story in the state to tell, which is that we’ve declined new diagnoses of HIV by 41 percent, saving the state $1.7 billion in healthcare costs, and if you hear nothing else but the little snippets of success that we’re accomplishing through their support and the investment of private donors and the public, that makes it all worthwhile.”

Organizers expect the 700-person event to sell out, as it has numerous times in the past. Native New Englander Rob Wilson initially learned about Taste of the South End when he volunteered for AAC. After attending for the first time, he was hooked.

“I never anticipated it would be so much fun,” said Wilson. “It is one of the better organized tasting events. It is a good size with enough options to tempt but will not overwhelm you, and the large open space ensures that the crowd and lines never become problematic. I come back each year because it is such an enjoyable, social program and it allows me to try food from new restaurants.”

“He’s been a longtime friend and supporter of AIDS Action Committee, and we’re giving him the Heroes In Action award in recognition of his contributions, so I think it’s a great moment to pause and reflect that this is a community. The culinary community in Boston has been there for AIDS Action, for the HIV movement for a long time,” said Sciortino. “It’s an award we give out just to a couple of people each year. It’s a very special award. We were really happy to honor him and grateful that he was willing to accept the award.”

Aside from Hamersley’s Bistro, many of the restaurants participating in the 2015 Taste of the South End have had long-standing relationships with AAC. The three-chain restaurant Orinoco has been taking part since they opened their doors on Shawmut Avenue in the South End in 2006. This year they’re planning on serving a whole pig roast to add some theatrical flair to their Latin American cooking style.

“The AIDS Action Committee has created a great community event that always showcases the diverse culinary talent of the neighborhood and also raises critical funds,” said Andres Branger, a partner at Orinoco. “We’re looking forward to this year’s Taste of the South End event. It’s become a must attend celebration. Neighbors meet to enjoy great food in a festive atmosphere and we love being a part of the fun.”

Another establishment looking forward to continuing its 14-year relationship with Taste of the South End is Flour Bakery + Cafe. At the 2015 event, they will be serving a coconut cream tartelette that comes in a sucres shell topped with whipped cream and toasted coconut.

“It’s always wonderful to see the outpouring of support for AIDS Action from many of our regular, longtime customers and neighbors,” Executive Pastry Chef and Partner Nicole Rhodes noted. “The night is always filled with delicious food, wonderful entertainment, and a great silent auction to wrap up the evening.”

Admission starts at $100 with the event running from 7 p.m. to 9:30 p.m. VIP tickets for $150 are available as well, providing a 6 p.m. early entrance. Throughout the night, guests can expect to experience live cooking demonstrations, a raffle, silent auction, wine tastings and beer samplings.

To learn more about AIDS Action Committee and ticket availability, please www.aac.org. A press release about the event also ran in TRT. To read it, or for more information click here.