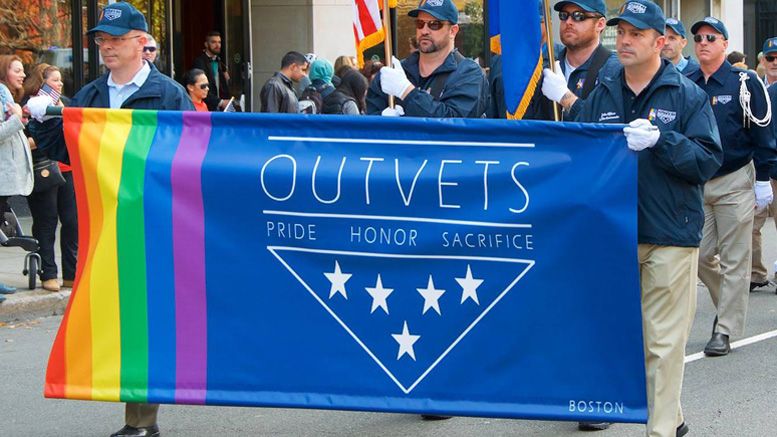 Update: Upon a second vote by the Allied War Veteran’s Council, AWVC, for inclusion of OUTVETS in the South Boston St. Patrick’s Day Parade on Friday, the group voted unanimously to permit the LGBTQ vets to march. OUTVETS released the following statement regarding the overturned decision.

“OutVets was just informed that a vote was taken tonight by the Allied War Veteran’s Council. The vote was unanimous (11-0) to accept OutVets into the St. Patrick’s Day Parade permanently.

“Additionally, we are encouraged by the further actions of the Council to reform their policies and procedures regarding management of this historic parade. These changes will make the parade more inclusive and transparent for the entire community.

“We are honored and humbled by all the outpouring of support that has been displayed for our LGBTQ Veterans – who are one of the most unrepresented demographic in our Veterans community. We look forward to marching proudly on March 19th and honoring the service and sacrifice of those brave men and women who have given so much for our country.”

BOSTON (March 8, 2017)—OUTVETS, a New England LGBTQ veterans organization, was denied entry in the AWVC St. Patrick’s Day parade Tuesday night, after being allowed to march for the past two years.

Gov. Charlie Baker and Boston Mayor Marty Walsh said they will not participate in the South Boston parade if OUTVETS didn’t march.

“We are extremely disappointed with the South Boston Allied War Veterans Council’s decision to ban OUTVETS from marching in this year’s St. Patrick’s Day Parade. For the last two years, OUTVETS has participated in the parade and represented LGBTQ veterans with honor and respect.

MassEquality is proud to support LGBTQ veterans and active servicepeople and to stand with them against discrimination and exclusion. LGBTQ people should never have to hide who they are to be safe, to be equal, or to celebrate other parts of their identities.

MassEquality remains committed to full equality and inclusion for everyone in our LGBTQ communities. We are grateful to Mayor Walsh, Governor Baker, Dan Magoon of Mass Fallen Heroes and other local and state leaders who have spoken publicly against the decision or declined to march in the Parade because of its return to a policy of exclusion. We hope that the Allied War Veterans Council will reconsider its vote, and we support the opening of dialogue between the Council and OUTVETS to work toward a resolution.”

According to OUTVETS‘ official Facebook page, once the organization members found out about the denial to march, a statement was issued from the LGBTQ veteran group.

“We just received word from the South Boston Allied War Veterans that OUTVETS has been denied entry into the 2017 South Boston St. Patrick’s Day Parade,” read OUTVETS Facebook page’s post. “While four members of the council advocated for our organization, the majority ruled against having OUTVETS in the parade. While the reason for our denial is unclear, one can only assume it’s because we are LGBTQ.

“OUTVETS has marched in the parade for the last two years without incident. We followed their rules to the letter and our presence helped to tear down the wall of discrimination that surrounded this event. In our first year, Congressman Seth Moulton and Secretary of Veterans Services, Francisco Urena marched with our organization in support of LGBTQ Veterans and our right to be respected as Veterans for our selfless service to our nation. However, last year our organization was placed at the rear of the parade and nowhere near other Veterans organizations. While many wanted to quit and go home, we agreed that as an organization we were there to honor those who had served and are still serving our country.

“OUTVETS complained to the organizers about this and thought we had a good working relationship with the council. We feel that with the death of former South Boston Allied War Veterans Council Commander, Brian Mahoney our strongest ally was gone and the old mindset of bigotry and discrimination crept back into the parade.

“This is a sad day for the LGBTQ community but also a horrible day for Veterans. We served our country with honor and distinction. But even after successfully participating in this parade and bringing honor to those who have served, we are still fighting for the respect that comes with serving our country.”

“It is outrageous and disgraceful that Allied War Veterans would decide to ban OUTVETS from marching in this year’s St. Patrick’s Day Parade,” he wrote. “Let’s just be clear, these are men and women who courageously put their lives on the line for our country. They deserve our respect just as much as anyone, and if this decision is not reversed immediately, I would encourage anybody who supports freedom, equality, and the service of our veterans no matter who they are, to boycott this parade.”

In 2015, The South Boston AWVC voted 5-4 in favor of allowing OUTVETS to march in South Boston’s St. Patrick’s Day Parade. This historic procession, first started in 1901, has had a long history of debating whether or not members of the LGBT community may participate.

Decorated Vietnam Veteran Pat Scanlon and an organizer of Veterans for Peace, responded to such exclusion of the LGBTQ and others by creating the St. Patrick’s Peace parade from 2011-2015.

“In 2011, we (VFP) had applied to be in the [AWVC] Parade and we were denied,” said Pat Scanlon, a decorated Vietnam Veteran and Immediate Past Coordinator of VFP Chapter, Smedley D. Butler Brigade. “We were told they didn’t want the word ‘peace’ associated with the word ‘veteran.’ For 20 years, the LGBT community had been denied approval to march and we were denied too, so we pulled a permit and in three weeks, we had 500 people on the street, two bands and a Duck Boat. We reached out to the LGBT community and said: ‘they [the AWVC organizers] denied you 17 years ago, we just bought a permit, how would you like to walk with us?’”

As reported by the Boston Herald, Tim Duross of the AWVC, claimed that the vote to deny OUTVETS this year was due to a violation of parade rules by the group’s “portrayal of sexuality,” as their organization banner displays a rainbow flag. He stands by that the decision was not based in discrimination.

“If everyone abides by our rules and they’re not outlandish, I think we can all have a great parade,” he told the Herald.

According to Edward Flynn, City Council candidate and member of the AWVC, a second vote on OUTVETS inclusion in the parade is expected on Friday.

“As a 25-year United States Navy veteran, I supported OUTVETS in 2014 and did so again this week,” he said. “I remain hopeful that my colleagues on the Council will correct this situation and join me in voting for inclusion.”