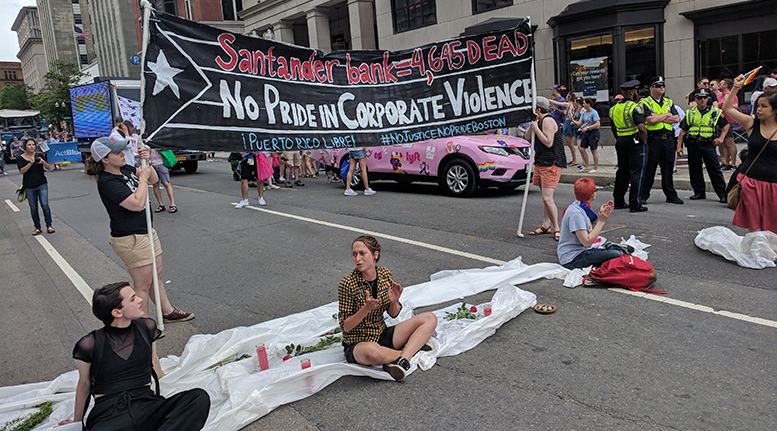 BOSTON—Queer and trans people of color (QTPOC) disrupted the Boston Pride parade today under the name No Justice No Pride Boston to elevate concerns of systemic racism within Boston Pride, including guidelines for corporate sponsorship and police presence.

No Justice No Pride Boston —a group of Black, Latinx, and Indigenous LGBTQ+ activists alongside white allies—disrupted the parade in front of the Santander contingent to protest a financial institution that has profited significantly from the humanitarian crisis in Puerto Rico. Santander’s economic exploitation has stripped the island of its capacity to invest in relief efforts, including rebuilding infrastructure. A recent study found that the death toll following Hurricane Maria is close to 5,000 people: a direct result of Santander’s business practices and an economic system rooted in a history of colonization and white supremacy.

We remind Boston Pride that Stonewall—led by trans women of color—was a protest against racist, anti-trans police brutality and the systemic oppression of queer and trans people further marginalized by race, class, ability, gender, religion, and immigration status. As these injustices continue today, Boston Pride cannot ally itself with the institutions that inflict harm on our community. Pride should be an opportunity to uplift marginalized voices within the LGBTQ+ community and to work together towards intersectional justice and freedom.

We highlight the many corporations that have made contributions to the Republican Party and Republican candidates actively supporting anti-LGBTQ+ agendas. These same corporations also profit from systems of oppression: private prisons and mass incarceration, war, surveillance, and pipelines—including the Dakota Access Pipeline—that destroy the earth and crush Indigenous sovereignty. By allowing corporations like TD Bank, Citizens Bank, Bank of America, and Capital One to march in the parade, Boston Pride celebrates those who profit most from systemic racism and white supremacy. In order to achieve the liberation of all LGBTQ+ people, Boston Pride must understand how its behavior is complicit in this violence and move towards centering those most marginalized within our community.

Boston Pride has done little to address the police presence at Pride events, and the culture of Boston Pride continues to be one that centers the comfort of LGBTQ law enforcement while ignoring the QTPOC victims of police brutality and ongoing ICE violence. Most recently, a transgender woman, seeking asylum from her home country of Honduras passed away under ICE custody.  Further, a significant number of transgender people experience harassment or violence from police, more so if they are people of color. Police brutality is a queer and transgender issue, and given our long painful history, police should never be celebrated at Pride.

We are also concerned by the inclusion of the Israeli Consulate this year. Israel has used their LGBTQ advocacy to distract from their human rights abuses towards the Palestinian people (otherwise known as “pinkwashing”), but there is nothing pro-LGBTQ about military occupation, apartheid, and ethnic cleansing. We stand with the Palestinian people in their struggle for liberation, and against the recent attacks on the Gaza Strip and the decades of state-sponsored violence and occupation of indigenous land.

Last year, a group of activists disrupted the Boston Pride parade to bring light to similar concerns, holding signs that read, “Sin Justicia, No Hay Orgullo” (Without Justice, There Is No Pride). In 2015, another group of QTPOC using the name #WickedPissed did the same. Until Boston Pride can affirm the lives of all members of the LGBTQ+ community as well as the history of Pride as a fight for basic human rights and against systemic injustice, we will continue to raise our voices.