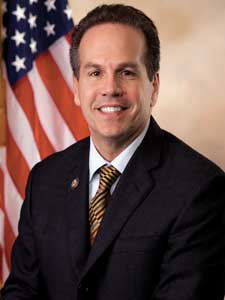 Youth from across the country are empowering themselves to make changes in their school environments and engage others in powerful ways. In Rhode Island, Congressman David Cicilline is providing an opportunity for youth to address pressing issues in their schools and influence public policy with his Congressional Youth Cabinet.

“The Cabinet is comprised of representatives from 27 high schools across Rhode Island’s First Congressional District,” Cicilline explained. “Each school selected one student to serve as their representative on the Cabinet, and representatives come from public, private and charter schools, with one home-schooled student.”

In an effort to bring together students that are representative of the whole state, Cicilline explained that his office reached out to high school principals across the state and asked them to nominate one outstanding student to be a representative on the Cabinet. “As a whole, the members of the Cabinet have demonstrated academic excellence while participating in an array of extracurricular activities,” he added.

“As both a guidance counselor and an advisor, I have broached the subject of bullying many times with my students,” he explained. “As a school, we remain proactive in providing and maintaining a safe learning environment for all our students.” [pullquote]“This branched off into the different facets of bullying, including cyber bullying, bullying based on gender or sexuality, the causes of bullying, and what could be done to stunt bullying.”[/pullquote]

Cicilline formed the Cabinet, currently in its first year, as a way to hear the priorities and concerns of his citizens. “As a member of Congress, it’s critical for me to listen to constituents and understand the ways that federal policies impact their lives,” he said. “The Congressional Youth Cabinet provides a forum to hear directly from young people about their concerns, such as bullying, the cost of higher education and jobs.”

Sarah King, a student representative from Cumberland High School, said that the first meeting of the Cabinet was solely dedicated to the issue of bullying. “This branched off into the different facets of bullying, including cyber bullying, bullying based on gender or sexuality, the causes of bullying, and what could be done to stunt bullying.”

Cicilline agrees that bullying is a prevalent issue in schools.

“Our first Youth Cabinet meeting looked at the issue of bullying in our schools, a significant concern not just for LGBT youth but for all students,” he stated. “As several Cabinet members mentioned, we need to do a better job of raising awareness about the underlying causes of bullying and finding ways to reduce it.”

Recently, in a press release from the offices of Representative Jared Polis of Colorado and Representative Ileana Ros-Lehtinen of Florida, it was announced that the Student Non-Discrimination Act had been reintroduced in the House of Representatives. This is legislation that Cicilline fully supports.

“None of us deserves to be bullied or harassed, and I’m committed to working at the federal level to ensure that schools are safe and nurturing environments for young people by passing legislation like the Student Non-Discrimination Act, a bill that would require public schools to take action to stop harassment and bullying,” he explained.

“The purpose of the Task Force will be to develop programs and review policies for revision … educate students and school personnel about the harm caused by bullying … and present to students programs to prevent or diminish bullying,” documented the anti-bullying policy. The Task Force can be made up of parents, school personnel, students, law enforcement officers and community members.

King also confirmed that there are policies in place to inhibit bullying and protect victims. “The anti-bullying policies are zero tolerance, and there are many ways to report incidences of bullying,” she explained. “Students can anonymously report an incident online at the Cumberland District website, allowing them to feel more comfortable.”

She added that the school has events planned to encourage unity and acceptance, including Respect Week, The Day of Silence and a screening of the film “Bully.”

Cicilline values the input from the youth on the Cabinet and hopes that this position offers them the opportunity to be more engaged in their communities and political processes.

“Even after just our first meeting, I feel like I’ve started a valuable dialogue with students, providing insight into the issues they’re concerned with,” he explained. “I plan to keep their concerns in mind when I’m in Washington, debating legislation that will have an impact on young people.”

The Cabinet is also intended to empower students to promote change in their own schools and communities, according to Cicilline. For King, her position on the Cabinet is an incredible learning experience. “This Cabinet is allowing me to foster my opinions and to grow not only as a student and a teenager, but as a human and a citizen of the world,” she said. “That is something priceless.”

Cicilline has received positive support from the community about his Youth Cabinet. “Several constituents reached out following our first meeting to offer their encouragement and some even expressed interest in helping to facilitate these very important discussions,” Cicilline explained.

King agrees that the Youth Cabinet is an important avenue for changes that need to be made in the community.

“We live in a world today where students, specifically teenagers, are apathetic about the situations that surround us,” she said. “Congressman Cicilline’s Youth Cabinet allows students to see that their voices do matter and that if we don’t all work together, nothing will be accomplished.”