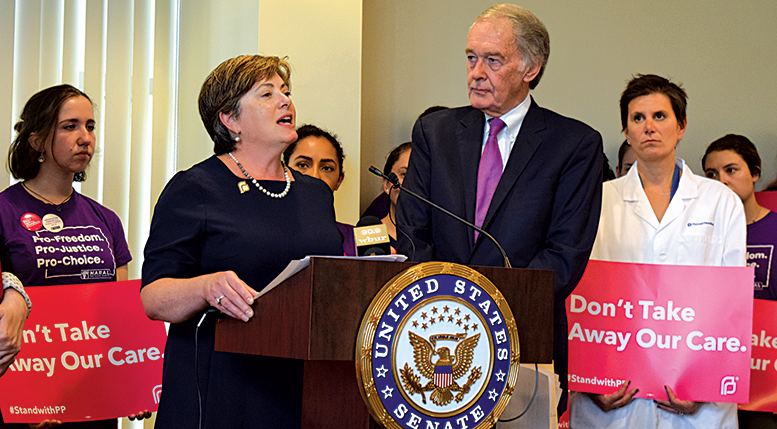 Progressive advocacy groups are mobilizing to oppose President Donald Trump’s nomination of Brett Kavanaugh as the next U.S. Supreme Court justice while the clock counts down to a potential confirmation hearing in the fall.

“There’s no way to sugarcoat it: with this nomination, the constitutional right to access safe, legal abortion in this country is on the line,” said Dr. Jennifer Childs-Roshak, president and CEO of Planned Parenthood League of Massachusetts (PPLM) in a press statement. “We already know how Brett Kavanaugh would rule on Roe v. Wade because the president told us so. We take Trump at his word that Brett Kavanaugh would overturn Roe v. Wade and get rid of the Affordable Care Act.”

Attorneys at GLBTQ Legal Advocates and Defenders (GLAD) said that a Kavanaugh confirmation would also undoubtedly lead to an assault on LGBTQ rights.

“Whoever is confirmed as the next Supreme Court justice will have a real impact on the numerous issues of specific concern to our LGBTQ communities that could easily be at the Court in the next term or terms,” said several GLAD attorneys in an e-mail interview with The Rainbow Times.

“These issues include review of the President’s newly constituted ban on open military service by transgender people, attempts to roll back or block transgender students’ rights, cases seeking to exclude LGBTQ people from employment protections under Title VII, cases seeking to carve religious-based ‘conscience’ exceptions into anti-discrimination laws, cases seeking to make our marriages second-class by denying the protections available to other married people, denying family-building through adoption and foster care, and by allowing objections to our marriages to serve as a basis for discrimination,” they continued

Trump announced his nomination of Kavanaugh on Monday, July 9. The 53-year-old currently serves as a circuit court judge in the United States Court of Appeals for the District of Columbia, a position he began in 2006 after a three-year, contentious, bi-partisan battle in the U.S. Senate. Kavanaugh was nominated for the position in 2003 by former President George W. Bush but was sworn into the seat in May 2006.

Kavanaugh was a lead attorney in an investigation in the 1990s of former President Bill Clinton and helped co-author The Starr Report, an account of several high-profile controversies involving Clinton’s administration. Most notable in the report was a well-reported sexual encounter between Clinton and former White House intern Monica Lewinsky, but the investigation also touched on a number of other reported conflicts within Clinton’s administration including allegations of misuse of FBI files and his conduct during a sexual harassment lawsuit. The report, highly controversial at the time, strongly advocated for Clinton’s impeachment.

During his 12-year tenure on the Court of Appeals, Kavanaugh has ruled in a number of high-profile cases including the right to access an abortion, the Affordable Care Act, the environment, the Second Amendment, and the concept of executive privilege, an often-contested legal theory that the president may withhold certain privileged information from Congress and the judiciary, even when faced with a subpoena.

“He suggested in 2009 that presidents should be immune from criminal investigations and prosecutions, as well as personal civil suits, until after leaving office,” she continued. “This is very concerning to us in light of the executive orders issued by Trump regarding travel bans, transgender soldiers in the military, religious freedom, The Dakota Access Pipeline, to name but a few.”

His record on reproductive rights has also caused concerns amongst advocates.

In 2017, Kavanaugh voted to block a lower court’s ruling that would have allowed an immigrant minor to have an abortion. Though the minor was ultimately allowed to have the procedure, Kavanaugh wrote a dissent claiming the ruling would create, “a new right for unlawful immigrant minors in U.S. government detention to obtain immediate abortion on demand.”

“Confirmation of Judge Kavanaugh will absolutely tip the balance of the court against the constitutional right to access abortion, and the right to be free from discrimination,” said Childs-Roshak in an interview with The Rainbow Times. “Any ruling overturning Roe v. Wade doesn’t change the fact that the Massachusetts Constitution protects the right to safe, legal abortion, but a person’s right to make their own decisions about abortion shouldn’t depend on where they live.”

GLAD attorneys noted that a Kavanaugh confirmation to the Supreme Court could also impact other groups outside of women and LGBTQ people.

“Beyond specific LGBTQ rights issues, many other issues of concern to our communities, from immigration rights and the rights of asylum seekers, to access to health care … voting rights, climate issues, questions of corporate and executive power and more—will likely all come before the Court.”

U.S. Congressman Ed Markey spoke at July 16 press conference with PPLM and voiced his own concerns with Kavanaugh’s nomination.

“This is a critical moment for our country … so I am going to fight this nominee every step of the way and I ask every American [to] join me in this fight,” said Markey at the event. “This is a fight for health, for equality, for dignity. It is a fight for the ages and we must win. We need all Americans to organize, to march and raise their voices to say that Judge Kavanaugh does not represent the values we need on the Supreme Court.”

Santiago echoed the concerns of Markey and the GLAD attorneys.

“We are concerned about how often Kavanaugh has been compared to conservative justices such as Antonin Scalia and Anthony Kennedy and what this will mean for gay marriage, transgender student rights, and so many issues that the Trump Administration has focused on,” she said.

What lies ahead for national LGBTQ rights if Kavanaugh is confirmed?

“We can expect many more cases that broaden religious and ‘moral’ exemptions from anti-discrimination laws even when adherents are not engaged in religious activities,” said Deborah Shields, JD, MPH, executive director of MassEquality, a Boston-based LGBTQ rights advocacy organization. “Is cake-baking for the public a religious activity? Is selling wedding flowers to the public? Hardly, and yet have we seen the courts moving in that direction, especially in the recent Masterpiece Cakeshop case.

“What can we do? I think we need to make sure that LGBTQ people use their voices and get out to vote, support progressive candidates, donate to progressive organizations, protest at rallies, send petitions, and support our state-based equality organizations.”

Santiago said that a confirmation will not change TNLR’s dedication and service to its clients.

“At the moment we will continue doing what we always do,” she said. “We will make a space for survivors from the LGBQ/T communities to talk about their experiences of both abuse from a partner and the many barriers they face when trying to get protection from the police or courts. We will be a place where survivors can get support around not only being survivors of abuse, but also their experiences as immigrants, people of color, folks living with disabilities, folks living with HIV/AIDS, folks who are incarcerated or formerly incarcerated, and religious minorities. We will also continue to collaborate with other community organizations and leaders at the state and national level as a strategy becomes clear about how to address these concerns.”

GLAD warns that now more than ever, LGBTQ people need to be vigilant when it comes to their rights.

“We are all acutely aware that this time marks a new political and civic moment in our nation’s history and a dramatic shift in our federal courts,” the attorneys said. “None of us can take for granted the full measure of protections we have secured while powerful forces are working mightily to unsettle even long-standing legal precedent. GLAD will continue fighting against the determined minority of people who seek to reverse equality and civil rights in every branch of government and alongside the majority of Americans who stand with us.”

[This exclusive report was originally posted on the August 2, 2018, issue of The Rainbow Times.]