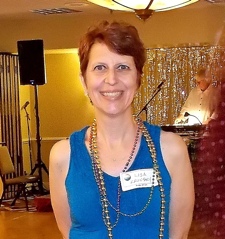 The LGBT Senior Pride Coalition held its 11th annual tea dance for LGBT seniors and their friends Saturday, June 8 at the Holiday Inn in Brookline as part of Boston Pride.

Lisa Krinsky, director of the LGBT Aging Project, noted that the dance is the only event during Pride Week that is dedicated specifically to older adults, and that people look forward to it all year. In addition to the dance, the LGBT Senior Pride Coalition also convenes older adults to walk, roll, or ride in the Pride Parade. This year, Krinsky said they will use three trolleys to shuttle people through the parade route, including one trolley sponsored by Boston Mayor Martin J. Walsh.

“We want to make sure that the folks who made all of this happen have a place to be part of the Pride celebration,” said Krinsky, noting, as many others did, that LGBT seniors laid the groundwork for today’s advances in equality and the community that has been formed through the years.

One of the highlights of the dance is the involvement of the Sisters of Perpetual Indulgence—grand marshals for this year’s Pride Parade—who attended for the second year in a row.

“We consider it very important to reach out to all different aspects of the LGBT community, and seniors rank very high among that group, especially because that’s a part of our community that often gets left out,” Sister Eunice X, founding member of the Boston Sisters and abbess of the Convent of the Commonwealth. “In the LGBT community, there’s such a high premium on sexuality and sensuality, and what that tends to do is create a culture of youth and beauty, and so a lot of our seniors tend to get kind of swept aside and they’re not really considered part of the mainstream, and what this event does is it brings them right back into the mainstream.” [pullquote]“We want to make sure that the folks who made all of this happen have a place to be part of the Pride celebration,” said Krinsky, noting, as many others did, that LGBT seniors laid the groundwork for today’s advances in equality and the community that has been formed through the years.[/pullquote]

The Sisters participate in the event by selling raffle tickets, dancing and interacting with attendees, and even hosting a live auction for one individual to receive a Sister makeover.

“We have a ministry of presence, where the idea is basically just to try to engage with as many individual people as we can and to give them a sense of importance and joy and really show our appreciation for the fact that they’re here,” Sister Eunice said.

Sister Frieda B Fabulous also shared her thoughts on why it is important to reach out to the LGBT senior population.

“These are the people who have paved the way for us to be comfortable as who we are, to make the world accept things like being gay or being transgender,” Sister Frieda said. “Without these people, we never would have gotten to the point where we’re at today. We aren’t fully where we need to be, but it’s going in the right direction thanks to the work that these people have done for us, and this is a way of thanking them for the commitments that they’ve made and making our world a better place and appreciating them as part of our community because without them this community probably would no exist.”

As DJ Shelly Cullen spun hits from every decade, the Sisters danced the afternoon away with attendees, including doing the hokey pokey and the chicken dance. For some people, the event is a way to start becoming involved in Pride and LGBT activities.

“This is only my second time. I’m just coming out,” said Pamela Harris. “I think it’s wonderful to have something for elders, and different folks that I’ve talked to said this is their very favorite event.”

Others have attended since the very beginning. Sue Katz—author of a new book, Lillian’s Last Affair, a collection of fictional short stories about the sexual lives and experiences of people in their 80s—said she’s been involved with many groups over the years, and even had her own lesbian newspaper, Lavender Vision, in the 70s.

Bernie Michels, who attended the dance with his partner, Herb, shared what Pride means to him.

“It represents equality, coming out, being visible, and celebrating all of those things,” Michels said.

The LGBT Senior Pride Coalition was formed in 2008 by a small group of nonprofits that serve LGBT elders, including the LGBT Aging Project; Stonewall Lifelong Learning Institute; New England Association on HIV Over Fifty (NEAHOF); Prime Timers, Inc.; and Older Lesbian Energy (OLE). Other organizations that belong to the Coalition now include Massachusetts Association of Older Americans, Inc. (MAOA); Stonewall Communities; Old Lesbians Organizing for Change (OLOC); and Rally! For LBT women 55 and over.

“There’s an opportunity for them to go back to college and study without stress, because there’s no credit and no exam,” said Wichian Rojanawon, director of OLLI, the only lifelong learning community for people over 50 in the country that has an active LGBT group within the program. “It’s just to enrich their life. Particularly for LGBT [elders], social connection is very important, and research shows that when they get older they tend to be at a greater risk than straight seniors, so building social connections when they’re young and active is very important, because when they get older they will have support.”