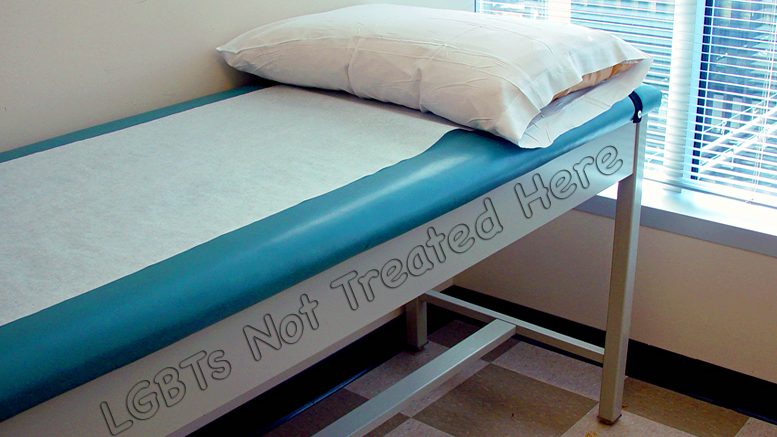 In many states LGBT Access to Healthcare is null because of discrimination, more anti-LGBT laws continue to emerge

BOSTON, Mass.—A policy brief released today by The Fenway Institute examines controversial state legislation that seeks to restrict access to healthcare and other essential services by LGBT people. Some of the proposed legislation would also nullify local nondiscrimination ordinances based on sexual orientation and gender identity, and denies transgender people access to restrooms according to their gender identity.

In the first half of 2016 alone, nearly 200 anti-LGBT bills have been filed in 32 states. Six states―Indiana, Arkansas, North Carolina, Tennessee, Mississippi, and Florida―have passed such legislation, and their governors have signed them into law. The policy brief puts this wave of anti-LGBT legislation into historical context and identifies the risks and implications for LGBT health.

“These bills take the concept of religious liberty, as protected by the 1993 Religious Freedom Restoration Act, and turn it on its head,” said Sean Cahill, Director of Health Policy Research at the Fenway Institute. “True religious freedom laws protect individuals’ free exercise of religion and they harm no one. But these new anti-LGBT laws are designed so that corporations, small businesses, hospitals and healthcare providers can deny service or treatment to LGBT people as a group by claiming that providing such service or treatment would violate their religious beliefs or sincerely held principles.”

A religious liberty bill signed into law by Tennessee Governor Bill Haslam permits therapists and counselors to deny treatment to any patient if that patient has “goals, outcomes, or behaviors” that would violate the “sincerely held principles” of the healthcare provider. The law specifically overrides the American Counseling Association’s Code of Ethics, which states that professional counselors may not refuse clients based on gender identity and sexual orientation.

Signed into law on March 10, 2016, Florida’s HB 43 expanded the state’s pre-existing religious freedom protections, stating that “churches…or certain individuals may not be required to solemnize any marriage or provide services, accommodations, facilities, goods, or privileges for related purposes if such action would violate sincerely held religious beliefs.”

These proposals and laws are the third wave of anti-LGBT legislation backed by social conservatives since the early 1970s. The first wave targeted sexual orientation nondiscrimination ordinances and laws. Ballot measures repealed municipal gay rights ordinances from 1974 in Boulder until the early 2000s.

The second wave of anti-LGBT activism, from the mid-1990s to 2012, targeted laws protecting the relationships of same-sex couples via domestic partnership arrangements, civil unions, and marriage itself.

The third wave of anti-LGBT activism―passing laws which limit access to health care and other services for LGBT people―represent a major public health threat in the United States. Unlike attempts to protect free exercise of religion, such as the right to use peyote as part of a Native American religious practice, these “religious exemption” laws cause real harm to third parties—i.e. LGBT people, same-sex couples, and others who do not conform to particular religious orthodoxies. As legal scholars Douglas NeJaime and Reva Seigel previously noted in a 2015 Yale Law Journal article, these laws inflict both material harm and dignitary harm—harms that exacerbate stigma and marginalization, and reduce social status—on other citizens. Religious freedom does not include the freedom to discriminate and cause harm to others by denying basic services we all need to live.

“It’s well established that LGBT people experience greater disparities in health than the general population, and these disparities are rooted in stigma, discrimination, and denial of civil rights,” Cahill added. “The Obama Administration has responded with a series of federal initiatives to increase awareness of LGBT disparities and to improve access to affirming and competent care for LGBT patients. The passage of religious liberties laws threatens to undermine this progress and actually worsen conditions for LGBT people.”

The policy brief, “The current wave of anti-LGBT legislation: Historical context and implications for LGBT health” is available at this link: http://fenwayhealth.org/wp-content/uploads/The-Fenway-Institute-Religious-Exemption-Brief-June-2016.pdf