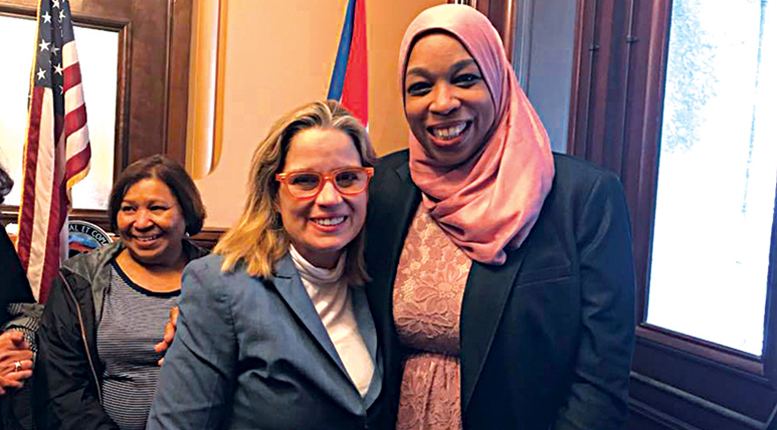 A Springfield, Massachusetts attorney, Tahirah Amatul-Wadud is hoping to unseat incumbent Congressman Richard Neal in the 1st District of Massachusetts. The Rainbow Times interviewed Amatul-Wadud about her candidacy, her qualifications, and what it’s like running against an incumbent occupying the seat for nearly 30 years.

The Rainbow Times: What was your inspiration for wanting to run for Congress?

Tahirah Amatul-Wadud: I was inspired by the strength of our people who have been complaining about [the] fact that too many people in our district are struggling and we do not have a fierce advocate representing the district to change our conditions. For example, we are last in the state for median income, we have a higher-than-average unemployment rate and a higher-than-average number of people not covered by insurance. Many people I know are working full-time jobs _and_ part-time jobs to make ends meet. This depresses the quality of life for too many people.

Q: What differentiates you from Congressman Neal in terms of how you’ll approach this position, if elected?

A: I am committed to being responsive to the people I serve. I support Medicare For All. I support reworking how we handle trade. The congressman’s record on this has been to vote for Favored Nations Status for China and for terms and conditions with Panama. These arrangements have allowed [a] deep trade deficit to set in and 14,000 jobs lost in our district.

He is beholden to special interest groups, which fund his campaigns, particularly pharmaceutical companies, insurance [companies], and others. This creates a conflict between his donors and his constituents and explains why he has not worked to advance policy that aims to control drug costs or to seek real solutions to preventing and treating addiction. I support efforts to increase [the] minimum wage and raising the standard of living for all of our communities who so desperately want and need it.

Q: Could you describe your background?

A: I was born in Queens, New York and lived in Brooklyn as a little girl. We moved to Springfield when I was nine. I was homeschooled from that time up until I started [at] Elms College and then Western New England University School of Law. I am married and have seven children ranging in age from 4 to 24 years old. I am 44 years old.

Q: As you know, Congressman Neal has been in his seat for 29 years. What’s it like running against an incumbent candidate given the often controversial narratives in our society around women and Muslims during President Trump’s presidency?

A: I feel very confident running in the face of the incumbency. Speaking to and advocating for truth to power is something that I have done my entire life. As [a] lawyer, and professional advocate, I have the skill set, the experience, and agency to do so in a meaningful way. We can win and will. As for President Trump’s attitude toward Muslims and women, it is dangerous and offensive. But his provocative statements allow him to give cover to his lack of follow through on policies he claimed to want to support, such as controlling pharmaceutical costs—he didn’t in his rollout of policy on this issue [in May]—and how [the] trade deficit continues to kill our local economy.

Q: What is your stance on issues impacting the LGBTQ community?

A: As a lawyer, for all of my professional life same-sex marriage has been legal—my opponent voted against this. I am a family law attorney. In the context of family law, I have always known families to be defined by the legal right to marry as people see fit. In that lens, I have advocated for children of same-sex couples and for LGBTQ adults in their rights as parents. And I will continue to do so. Additionally, I support increasing and funding anti-bullying efforts in schools, and protection against discrimination in the workplace. I oppose religious exemption laws, which give people the right to impose their own religious principles on others or deny service to people in a discriminatory fashion.

Q: Given the changing social landscape following the election of President Trump, I’m sure you’ve been aware of increases in xenophobia, Islamophobia, homophobia, transphobia, misogyny, sexism and racism in American culture across the nation. As a woman of faith, how will you address acts of bigotry and hatred within your own district?

A: As a congresswoman, I will continue to model a spirit of open-mindedness and respect, which I have tried to live my life committed to. I will always promote policies which protect people from oppression and marginalization, and I will work to elicit the voices of everyone in our community. Because of my identity as a woman of color and a Muslim, I am personally aware of how bigotry works and what it looks like. As a lawyer, and a candidate for office, I am gifted with the skills and platform to call it out and correct that behavior.

Q: How do your identities as a woman and as a Muslim contribute to the work you’ll do if elected to office?

A: It allows me to be keenly aware of the need to seek and listen to the voices of all people I seek to serve.

Q: What should the LGBTQ community in western Massachusetts know about you and how you will serve them if elected to office?

A: The LGBTQ community is represented in every aspect of the citizenry I seek to serve. I have fought and will always fight against discrimination and hate. I will fight to uphold the laws which protect LGBTQ people and families and look to bridge gaps where there are inconsistencies in laws—for example, a more protective state law and less protective federal law. I will pursue protections from bullying for all students and particularly students who are bullied based on gender identity or [sexual] orientation.

A: We can win and we will win. I view my candidacy itself as a victory for the people of the 1st District. As a candidate with a diverse background, I know that representation matters. I also know being able to talk about the issues near and dear to people’s hearts is important. That I am doing that already shows that I am having an impact. [The fact that] I will continue to do that as an elected official is evidence that the people will continue to win with me as their congressional representative.