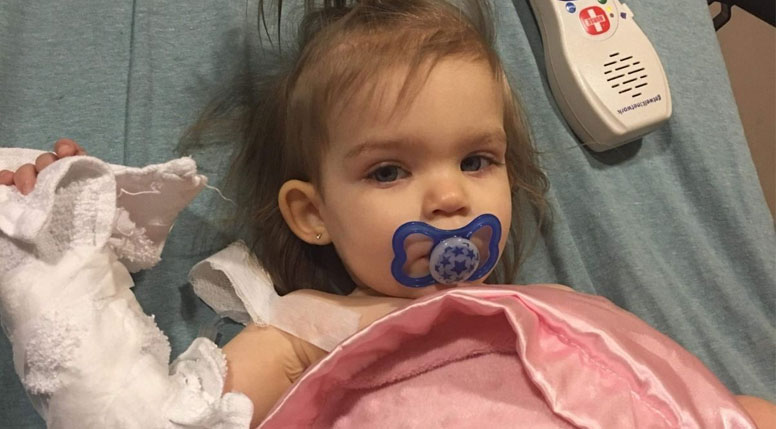 Callie Strong. Donor pulls donation from adopted baby with cancer once discovering she had two moms

Like would be any parent’s nightmare, a lesbian couple recently found out their baby has Stage 4 cancer, LGBTQ Nation reported. As if that was not tragic enough, it became worse when a “Christian” donor yanked their pledge to help fund the baby’s medical costs, once discovering she had two moms.

Callie June, just 18 months old, has Stage 4 Neuroblastoma, which is a cancer of the nerves. As any devoted parent would be, her moms have been “by her side ever since,” the report read.

According to LGBTQ Nation, one of the mothers quit her job to take care of Callie and insurmountable debt was incurred to pay for her treatment. As such, an extended family member is reported to have set up a GoFundMe page to assist with medical costs for the adopted baby. It was through the crowd-funding website where they allegedly came into contact with a person who said, “they would donate $7,600 toward Callie’s treatment.” I can imagine the financial relief that such a generous donation would provide to parents undergoing similar situations.

“I am asking friends and family to please help if you can and to please pray,” pleaded the GoFundMe page. “This is my sweet niece who is 18 months old. Her name is Callie June and her adoption was just finalized this week. She is in Cincinnati Children’s Hospital where on New Year’s Day she was diagnosed with advanced neuroblastoma that has metastasized to her lymph nodes and bones. We found out today that her cancer is in Stage 4 and she is high risk. She will need 18 months of chemotherapy and radiation treatment, she will need a bone marrow transplant, and will also need future surgery to remove the tumor once it shrinks.”

Callie’s treatment will last as long as her short life has been lived. The agony of that must be excruciating alone. And, anyone in a same-sex relationship knows all too well the complexities of navigating in a world where you have to justify or defend your love for each other, your family unit, how you choose to have children or not, and of course, there is the never-ending criticism from the religious right and the condemnation that ensues as a result.

That donor, an “angel” some might say at the onset, recanted their offer of support when they found out that baby Callie was adopted by two women. Not only did they withdraw the assistance, they openly condemned the parents, even blaming them for the illness that was ravaging their baby’s body.

“My prayers for Callie. I was going to donate $7,600.00 to her fund, but I found out her parents are lesbian,” they wrote. “I’ve chosen to donate to St. Jude due to that fact. Sorry. I’ll still pray for her though, but maybe it’s God’s way of getting your attention that she needs a mommy and a daddy, not two mommies.”

Such a stunted mentality might be understood better if we didn’t know better. But we do. If there hadn’t been documented research upon studies and empirical findings that prove that children who grow up with gay parents thrive just as well or better when compared to those raised in hetero-normative households, then one may be able to understand such an ill-informed perspective. But, we know better. If there wasn’t scientific evidence that being a member of the LGBTQ community is valid, even biologically based and irrefutable proof that what benefits children the most is a loving household, then one could possibly understand the level of ignorance. This is not based on ignorance but on hate.

This “Christian” donor, as the article describes them, is not Christian at all, at least not according to the example set by the Christ that the Bible depicts and Christians are “called to follow.” When you peel away the layers of people and their behavioral patterns, it becomes obvious as to which Christians live their lives according to Christ’s example and which are wolves in sheep’s clothing.

How many times do we hear the religious right extremists argue “pro-life” stances over and over again? However, those very people are usually the ones that pick and choose whose life matters and whose life does not. In this case, because baby Callie has two mothers, her life and the mothers’ suffering didn’t matter to this “Christian.” Instead, their judgment and condemnation was more important to them. That conditional financial assistance and subsequent behavior is not “pro-life” at all.

Some of those that ascribe to the ideology above also support Trump and his heinous policies relating to immigration, including caging children and ripping them away from their immigrant parents who have come to this country seeking asylum from persecution, and yet they have no qualms with those actions. That is not “pro-life” either. The self-proclaimed and self-righteous Christians that do not support women’s rights, LGBTQ lives, Black Lives, the homeless, humble and meek, are not “pro-life” at all. Any human cherry picking whose life is worthy and whose life can be spared is not “pro-life,” regardless of how they paint themselves to be through talking about the Bible or how often they go to church.

I am ardently and uncompromisingly pro-choice. And, I am vehemently pro-life in the very most authentic sense of the word.

As for Callie, her parents say that most important to them is the “love, support and prayers” to their “little Callie,” the moms told KTVU.

*Nicole Lashomb is Editor-in-Chief of The Rainbow Times and Co-founder of Project Out. She holds an MBA from Marylhurst University and a BM from the esteemed Crane School of Music. Nicole can be reached at editor@therainbowtimesmass.com.