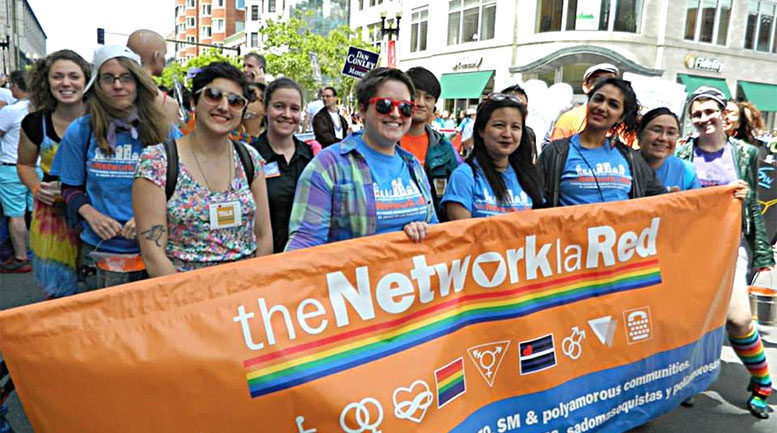 BOSTON—A Massachusetts coalition of more than 60 organizations against sexual assault and violence, recently met with state lawmakers to brief them on key legislation and budget priorities for 2019, pulling LGBTQ+ and other marginalized survivor needs into the larger inclusive focus.

“In everything we do, Jane Doe works intentionally to be inclusive and responsive to the needs of survivors from every community,” said Maureen Gallagher, Policy Director, Jane Doe, Inc. “We understand that identity, race, immigration status, socioeconomic status, and many other factors contribute to how survivors are affected by sexual and domestic violence, and how service organizations engage with survivors.”

Sabrina Santiago, Co-Executive Director of The Network/La Red (TNLR) emphasized the impact that the legislative priorities will have on the LGBTQ community, especially bisexual and transgender members that experience higher abuse at alarming rates.

“These bills will not only support the needs of cisgender heterosexual survivors, but those from LGBQ/T communities as well,” she said. “LGBQ/T people experience partner abuse at a rate equal to or higher than straight cisgender communities—from 25-33 percent of relationships. For bisexual women that rate is 2.6 times higher and studies show that transgender individuals experience abuse at a rate between 31-50 percent.”

According to Gallagher, this year’s priorities reflect an increased emphasis on prevention and ongoing support of survivors.

“Policies like the Healthy Relationships Grant Program, the Act Relative to Healthy Youth, and the Act Relative to Sexual Violence on Higher Education Campuses are critical to helping young people and institutions better understand and identify the root causes and precursors to gender-based violence, and to preventing future instances of sexual and domestic violence,” she explained.

Jane Doe has identified the need for a “significant increase in funding for the Healthy Relationships Grant Program, along with increased funding for direct services, and legislation that will address issues of sexual and domestic violence on college campuses, empower our immigrant communities, and help provide economic justice for survivors,” Gallagher said.

Although there are similarities between straight cisgender and LGBTQ+ abuse, there are also distinct differences as Santiago cited with specific examples.

“ … Unique barriers that exist for LGBQ/T survivors results from the intersection of abuse and the homophobia, biphobia, and transphobia we face,” explained Santiago. “For instance, a gay male abuser might tell his newly out partner, ‘this is just how things are in gay relationships.’ And if that survivor was raised on stereotypes of gay people as violent and unhealthy, he might believe that. This is only reinforced when that survivor, say, goes to his college campus police who laugh at him and refuse to help him. Or, the abuser of a transgender individual might tell their partner, ‘If you leave, I’ll report you for child abuse, and watch how quickly your kids get taken away.’ Given the history of transgender parents losing custody and visitation of their children solely based on their gender identity, that is a risk most parents won’t take.”

The LGBTQ+ community also tends to have less familial and public service support, which compounds receiving the help they need, according to Santiago.

“All batterers try to isolate their partners, but if the partner was cut off by family upon coming out, then our culture has already done that work for the abuser,” Santiago said. “A lesbian abuser can easily follow her partner into a shelter by presenting herself as a victim if that program has no screening process. And many LGBQ/T survivors, especially those who are transgender, are still refused services outright, or, are faced with services that are not culturally competent. Police and courts are often hostile and are not a viable option for most members of our communities.”

Jane Doe has committed itself to uplift marginalized struggles within the broader community.

“We are constantly learning from our members, who serve such a diverse community of survivors, and are working to amplify culturally appropriate best practices,” Gallagher noted.

Santiago also addressed the impact of funding that the legislative priorities have on LGBTQ+ youth.

“A $1,000,000 increase in prevention funds and the Healthy Youth Act will impact programs for young people, allowing youth to learn more at a younger age about healthy/consensual relationships,” she said.

Traditionally, LGBTQ+ youth are not included in healthy relationship studies, leaving them susceptible to potential abuse.

“For LGBQ/T communities, this is crucial as so many of our young people are being left out of existing healthy relationship curricula,” Santiago explained. “Our youth need to be taught that LGBQ/T relationships exist, are valid, and how to create healthy/consensual relationships for themselves. More inclusive curricula not only educate LGBQ/T youth about their own relationships but also reach straight and cisgender youth creating an environment where LGBQ/T people and their relationships are normalized.”

Immigrant survivors, including those that are LGBTQ+ are at particular risk, making the Safe Communities Act vital, Santiago said.

“The Safe Communities Act is essential to create a separation between the police and ICE (U.S. Immigration and Customs Enforcement),” she said. “LGBQ/T survivors of partner abuse who are also immigrants or refugees are afraid of being detained and deported if they were to seek safety by calling the police, seeking a restraining order, or pressing charges against their abusive partner. And many LGBQ/T people have fled homo/bi/transphobic violence in their countries of origin. Survivors of partner abuse are being forced to live with one form of violence in order to escape the other.”

Communication between Jane Doe, its member organizations and legislators provided an opportunity for lawmakers to become informed by those on the front lines combating the epidemic of sexual and domestic violence within the commonwealth.

“The briefing was a wonderful opportunity for state legislators, staff, member organizations, and allies to hear from Jane Doe … and directly from some of our tremendous member organizations about the important work they are doing, and how state-level policy and funding decisions create real-world impact,” Gallagher said.

And while the current priorities and budget are critical, Santiago reminds the public that there are many more issues to tackle relating to the well-being and safety of the LGBTQ+ community.

“We will be working with Jane Doe Inc. and the rest of its member programs to push for these initiatives. It’s important to note, though, that while essential, they by no means cover all the need there is for LGBQ/T domestic and sexual assault survivors,” she said.

According to Santiago, initiatives such as police misconduct, equitable access to health care, safe schools and public spaces are also on the forefront of the work that TNLR aims to achieve, yet funding remains a struggle.

“We need to address police misconduct as well as homo/bi/transphobia in all of the systems and institutions that survivors interact with and that could offer a variety of support—from health care to schools to faith communities,” Santiago said. “We need to educate staff at LGBQ/T bars and clubs, hair salons and barber shops, youth groups, and so many others to recognize and respond to partner abuse. And, we need to drastically increase LGBQ/T-specific funding.”

Over the past two years TNLR has absorbed budget cuts of over 50 percent to key education and technical assistance programs, which has drastically reduced the organization’s ability to train and assist mainstream domestic violence programs to become safer for and more welcoming of LGBQ/T survivors, according to Santiago.

“TNLR works statewide to address LGBQ/T partner abuse, and additional funding is essential to properly address that level of need,” she said.

Gallagher agrees that funding is an issue but is encouraged after the briefing.

“We are always concerned that our member organizations have the funding they need to support survivors and educate people in their communities about issues of sexual and domestic violence, but we are encouraged by the Governor’s budget, and hope that the State Legislature will maintain critical increases in funding for direct services, the Healthy Relationships Grant Program, and the Sexual Assault Nurse Examiner (SANE) program,” Gallagher said.