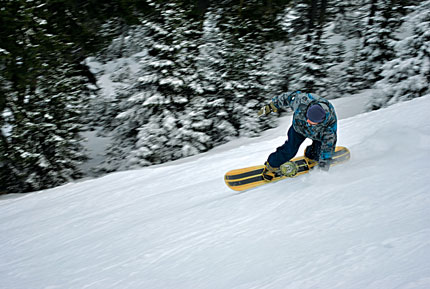 Lesbian who participate in extreme sports don’t have it easy

Five-year-old Tedi Bowler was “totally into” sports. But in Duluth, Minn. in the 1980s, she says, “girls were not allowed to do that.” So she grew wary of following her passion.

Two years later, she rode her first BMX bike. That too was a bit odd for a girl. But she loved everything about it – the tough terrain, the danger, the adrenaline rush—and she kept riding.

Yet she kept riding. On a BMX bike—also called “bicycle motocross”—she felt free. She performed tricks. And Bowler was getting much-needed exercise.

Bowler gained the confidence to join team sports. She played ice hockey, flag football, softball and basketball, but extreme sports were the best.

At 35, after watching the X Games, Bowler began skateboarding.

For more than a decade, Bowler says, “I’ve been able to fully enjoy extreme sports.”

She’s worked two or three jobs at a time, since she was 19. Her Fetal Alcohol Syndrome made it hard to keep any one job, she says, so she has done mostly temp work. The variety appeals to her. “Otherwise, she says, “I’d be bored and agitated.”

“Boredom” is not something that BMX riders, skateboarders and other extreme sport athletes suffer from. They constantly seek the next challenge.

For Bowler, that challenge means getting extreme sports into the Twin Cities Pride celebration. And not just for the traditional participants: men.

Bowler says that, very quietly, women have become a presence in the extreme sports world. But she knows of very few who self-identify as lesbian, or are open about it.

“We’re already being judged as women by the extreme sports community,” Bowler explains. “Most lesbians probably keep quiet. They don’t want one more issue to contend with.”

She assumes there are “tons” of lesbians—and “probably plenty of gay guys too.” But, she says, extreme sports is one place where homosexuality is still not discussed.

She recalls one “aggressive” inline skater who came out in the 1990s. Bowler says his disclosure did not go over well.

Google searches for “gay or lesbian BMX riders” come up empty. There are a few online discussions about whether anyone is out in the sport. The level of discourse is not high. “It’s too manly a sport,” is one comment. Speculation about a rider with a pink bike is another.

After Tim Von Werne’s career was cut short under what one magazine called “a cloud of controversy,” gay skateboarders seem to have remained in the closet too.

Bowler has vowed to increase visibility of extreme sports, and of the lesbians and gay men who love it.

She envisions BMX racing, skateboarding and more as part of the 2016 Twin Cities Pride festival. “I’m tired of walking around every year at Pride, feeling like I’m ignored,” she says. “This is a real sport.” [pullquote]“We’re already being judged as women by the extreme sports community,” Bowler explains. “Most lesbians probably keep quiet. They don’t want one more issue to contend with.”[/pullquote]

The celebration at Loring Park already includes several sports, Bowler notes. Minneapolis and St. Paul are filled with gyms; cross-training is very popular. Why not add extreme sports into the mix?

She also hopes her work will bring visibility to the Fetal Alcohol Syndrome community. If others can see that she’s gotten involved in something athletic, daring and fun, they might be tempted to ride a bike or skateboard too.

Dot Belstler is in charge of Twin Cities Pride. Her title is executive director, but it’s not as if she runs a huge staff. Virtually everyone else is a volunteer.

She points with—well, pride—to the day-long men’s volleyball tournament held on Saturday every year. On Sunday there are tournaments for soccer, rugby, touch football, softball and men’s and women’s basketball. The “Studs vs. Femmes” women’s basketball event creates particular energy; bleachers are brought in to handle the crowds that watch.

In addition, many sports organizations march in the Pride parade. “The rugby boys are favorites,” Belstler says. WHAM—the Women’s Hockey Association of Minnesota—“marches” on rollerblades.

But, Belstler says, adding extreme sports may be easier said than done. Ramps and other equipment must be trucked in, and Loring Park is already filled to capacity.

Still, Teri Bowler is undeterred. She has a year to “ride” to the rescue of extreme sports.