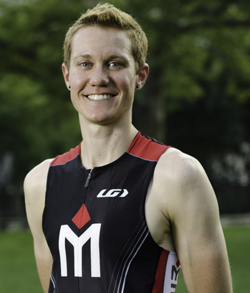 Chris Mosier, a transman, shows passion and dedication to help the victims of hurricane Sandy and the lgbt homeless youth of the Ali Forney Center.

Chris Mosier, a transman, shows passion and dedication to help the victims of hurricane Sandy and the lgbt homeless youth of the Ali Forney Center.

By: Dan Woog*/Special to TRT–

These days, if you can run, you can raise funds. Every weekend, it seems, there are road races to cure breast cancer, build schools in impoverished African villages, and do just about every other good deed imaginable. Fundraising races are impressive affairs, complete with corporate sponsors, water stations and gushing publicity.

When Chris Mosier decided to run to raise money, though, he did it alone. The decision seemed apt. He was running to support homeless LGBT teenagers, and few populations are as lonely as that.

Chris was never homeless himself. But the plight of teenagers cast out of their families – then left to battle for survival, at the same time trying to figure out who they are and where they fit into the world – resonated deeply.

As a child growing up near Chicago, he played team sports. He always knew on some level he did not fit society’s expectations of gender, but he did not have the vocabulary to express what he] felt.

Even in college, Chris says, “I didn’t know about the LGBT community. I was oblivious to it, and to any kind of self-awareness.”

About 10 years ago though, Chris finally met some transgender people. Gradually, that self-awareness grew.

Chris moved to New York and began a career in higher education. Chris identified as “queer,” and played on men’s softball teams.

But Chris also ran and bicycled on teams and in events as a female. “I delayed my transition because of sports,” Chris says. “I did well as a woman, and wondered how competing as a man would affect things. I wear Spandex. I’m in very body-conscious sports. Being an athlete was an important part of my identity, and I had a lot of questions.”

Those worries proved groundless. Chris was accepted quickly during and after his transition. He’s spent the last five years competing in road races and triathlons, and serves as a coach and ambassador for the Empire Triathlon Club and Team Aquaphor.

Like many members of New York’s LGBT community, Chris had heard of the Ali Forney Center. As he learned of its devastation during the hurricane – and saw other destruction while running in local parks – Chris vowed to help.

As vital as its work is, Ali Forney is only a drop in the bucket. There are an estimated 3,800 homeless youth in New York, Chris says. Forty percent are LGBT. The center provides only 250 beds. Still, it’s something.

“I don’t have the money to get Ali Forney back on its feet myself. But I could raise a little bit,” Chris says. “And if I raised awareness, too, that might lead to something.”

He chose a date – Dec. 1 – and spent three weeks spreading the word via social media. Donors could contribute any amount; suggestions included $32 (a dollar for every mile he figured he’d run), $50 (a dollar for every kilometer), or whatever else anyone wanted.

He also gathered prizes to raffle off to contributors.

“A lot of teammates and friends offered to join,” he notes. “But it was important for me to do this by myself.”

He wore no headphones; he just ran, and reflected. At one point he stopped at the Staten Island Ferry Terminal to warm his hands. “I realized, if I was homeless I couldn’t just do that,” he says. “I’d have to really think about things like where I could use the bathroom.” He carried a bit of food, but dropped some along the way. “If I was homeless, losing that food would have meant a lot more.”

Chris’ run took 5 hours and 18 minutes. He felt pretty good until Mile 25. At Mile 30, he really started to feel the effects. But – like homeless youth with no other options – he kept going.

When it was over, he had an hour to shower, and get to work.

The Ali Forney Center had no idea who Chris was. They still might not. That’s not the point, he says. “This isn’t about me. It’s about getting the word out, and helping an organization that helps kids who need help.”

Chris continues to get the word out. And he continues to accept donations. The website is www.aliforneycenter.org. Search there for “Mosier” and give what you can.

*Dan Woog is a journalist, educator, soccer coach and gay activist. His latest book is We Kick Balls: True Stories from the Youth Soccer Wars. He can be reached care of this publication or at OutField@qsyndicate.com.

EDITOR’S NOTE — UPDATED: Chris Mosier contacted The Rainbow Times. Chris requested the change of pronouns and we, at The Rainbow Times, gladly changed them to what he had asked the author to be.  Please remember that for stories that read “Special for TRT” the reader should send comments and complaints to the author’s e-mail, usually found at the end of each story. However, we are always a source to try to resolve issues in a manner that is correct and respectful for all. Thank you, everyone, for your feedback. We appreciate it. Thank you, Chris, for contacting us and good luck!

Survey: Majority of Americans Back Up Open Transgender Military Service

6 Comments on "The OutField: Transman with Heart of Gold – Chris Mosier Runs To Help Others"