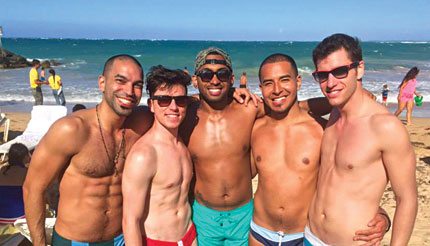 While living in Philadelphia, Joshua Durando felt a bit restless and decided to mix up his social life. Having volunteered to blog about a Guerilla Queer Bar (GQB) event for PhillyGayCalendar.com, he went with a few friends and said he enjoyed himself. The premise of GQB gatherings was simple: on a Friday night, LGBTQ people would “take over” a bar typically known for catering to straight people. An e-mail listserv would send out the location and time the event was happening and anyone receiving the e-mail was more than welcome to attend.

Something about the event resonated with Durando, though.

“As a cisgender male, my pronouns were not something I had to think about often, and I remember being struck by that,” he said. “I loved that there was a community effort around making folks feel comfortable, and respecting their identity.”

He started volunteering for The Welcoming Committee, the host of the GQB events, and now the 29-year-old is a community operations manager in the Boston office. [pullquote]Co-founded in 2007 by Daniel Heller, the Boston Guerilla Queer Bar (BGQB) was a social experiment in making LGBTQ people comfortable in places that weren’t typically open to them.[/pullquote]

Co-founded in 2007 by Daniel Heller, the Boston Guerilla Queer Bar (BGQB) was a social experiment in making LGBTQ people comfortable in places that weren’t typically open to them.

“About 20 people came to our first [event], 50 at the second, but by the fifth event over 1,000 people showed up,” said Heller, 31, of Boston. Eventually, Boston Guerilla Queer Bar became The Welcoming Committee, and as such, took on a role of providing accepting and inclusive environments for LGBTQ people beyond the Boston bar scene.

“A true community developed, and people wanted to see our experiences outside of bars,” said Heller, noting that events graduated from the bar scene to a Red Sox game, the Boston Pops Orchestra and even a Foxwoods Casino trip.

And the experience isn’t limited to Boston. There are nine other locales with TWC operations including Atlanta, Chicago, Los Angeles, Minneapolis, New York, Philadelphia, San Francisco, Seattle, and Washington, D.C.

“Our members were constantly moving to new places and asking us to open up shop there, and that’s how we started expanding by our second, third, and now tenth city,” Heller said, noting that TWC nationally boasts 33,000 registered members, nearly 100 active volunteers, and 10 full time staff. [pullquote]Eventually, Boston Guerilla Queer Bar became The Welcoming Committee, and as such, took on a role of providing accepting and inclusive environments for LGBTQ people beyond the Boston bar scene.[/pullquote]

According to Heller, in 2015, TWC collectively hosted more than 300 events with greater than 40,000 people. In the nine years since its creation, TWC welcomes people by the hundreds to a variety of nightlife, culture, sporting and travel events.

“Bar crawls are nice every now and then, however, [attendees] love our sports events and movie screenings and additional opportunities where they can actually sit and talk to other attendees,” said Dianna Flood, 26, a New York City volunteer.

In 2016, TWC is prepared to evolve even more. In mid-January, the organization launched Project Home, an initiative to make events even more inclusive by addressing common issues that many LGBTQ people face in public situations. In its first four-month round, TWC plans to tackle three issues: safety in restrooms; equitable access to facilities for those with disabilities; and the use of inclusive language in communications to TWC members.

“Project Home is a process, not a silver bullet solution,” said Heller, acknowledging that the project aims to plant the seeds of acceptance and inclusion at TWC gatherings. “We created Project Home as a way to open up the process of making TWC more inclusive in an organized, collaborative, and transparent way.”

“I think the hope with Project Home is that the teachable moments start happening on a grand scale,” said Durando, the Boston-based community operations manager.

Heller acknowledged that TWC staff and volunteers are not always aware of what initiatives are the best to work on, but said his goal in building up Project Home is to create a transparent process for the organization to be as inclusive as possible. Currently, the TWC staff and volunteers are brainstorming ways to implement the three-pronged approach they’ve chosen. [pullquote]In 2016, TWC is prepared to evolve even more. In mid-January, the organization launched Project Home, an initiative to make events even more inclusive by addressing common issues that many LGBTQ people face in public situations.[/pullquote]

Referencing recent protests from students of color at Yale University (http://goo.gl/gPPQK9) and the University of Missouri (http://goo.gl/4qYjEp), Heller said he noticed that those schools often publicized themselves as diverse “homes” for students, but their actual practices were quite different. The racial tensions birthed from the protests inspired him to conceptualize a program that makes TWC members feel as though they’re at home, and not merely guests at events.

“The initiatives that have been given to us may seem small, but I hope they make a huge impact,” said Flood, the New York City volunteer. “I want people to see that we are acknowledging them; we are not just about numbers at events. We are making these changes for their comfort.”

Molly Paul, 24, another community operations manager in the Boston office, emphasized the importance of allowing the project to grow organically:

“What we do has the ability to make a large impact and while we might not always know the right answers initially, the important questions are being asked and we are constantly evolving what we do to better meet the community needs,” she said.

Andrew Rayner, 27, a Boston volunteer working on the Project Home campaign, said he admires the approach TWC is taking to further embrace inclusivity and acceptance.

“I think part of our responsibility right now is to let other queer communities—particularly those that are frequently overlooked or more marginalized—[know] that we see them, we want to work with them, we want to support them, and we want to help them reach their goals…as one queer family.”

For more information about Project Home or to get involved, please visit www.thewelcomingcommittee.com/projecthome.