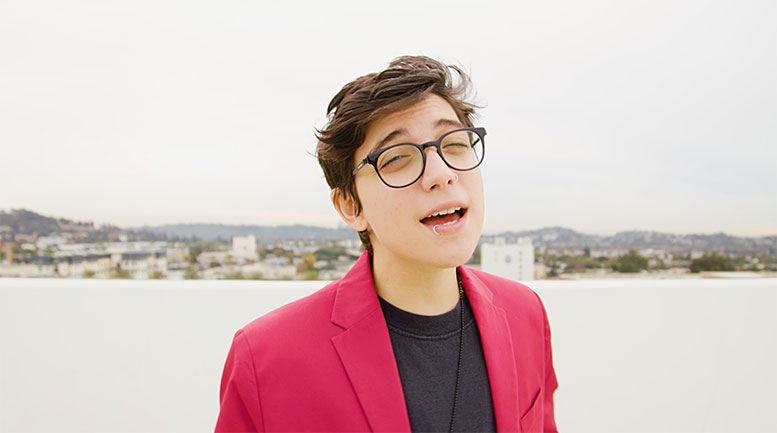 Ryan Cassata isn’t only a talented singer and songwriter, but he’s also someone with a big heart who cares for his community and how they navigate through the Holiday Season. To that effect, this trans sensation has released a new video in which he sings “It’s Christmastime”, a song written by George Danno Jr., but with his own “modern twist and some new lyrics.”

“I made this video with Growl Studios around Los Angeles!” he said. “We had a really fun time making this and I think that energy shows through on the final product.”

Cassata—through songs, an upcoming book, TV appearances, interviews, videos and more—has vested most of his life to helping other LGBTQ people. This time around, it’s not just about the fun. Cassata was thinking of the particulars experienced by transgender people during the Holidays.

“As you probably know, the Holidays are one of the hardest times of the year for trans people to get through,” said Cassata to The Rainbow Times, as he further explained the dangers and burdens that the season can bring upon members of this community. “It’s hard to sit around the family dinner table and not feel welcomed as relatives are calling you the wrong name and pronouns non-stop and totally ignoring your significant other.”

A recent study by the American Academy of Pediatrics has uncovered startling results, which align with Cassata’s concerns. The study exposes the incidence of suicides among transgender youth—the highest rates among transgender boys and non-binary youth.

And that is a feeling that Cassata can relate to and the reason behind the video.

“I’ve been in that situation many times and have spent many Christmases crying by the end of the night because it was just too disheartening,” he said. “Christmas is supposed to feel special, not like a chore, and it’s definitely not supposed to feel like you are being bullied.”

In the face of adversity, he has decided to reclaim Christmas and send a message to the thousands of trans followers, allies too, who often turn to him for advice.

“Making the ‘It’s Christmastime’ music video allowed me, as a trans person who’s been out over 10 years, to take back Christmas. It allowed me to create a positive feeling about Christmas, the feeling I had as a little kid before I came out as trans and before all the deadnaming and misgendering begun,” he explained. “I want to share that feeling with the rest of my community, a community, who can really use their days to feel a little brighter. I hope the video serves as a reminder for the entire LGBTQ community that things do get better and brighter with time.”

And he’s a testament to that resiliency himself.

“I got through it, and as you can see me smiling in the video, I’m a happy trans person now with a very fun and meaningful life,” he proudly said.