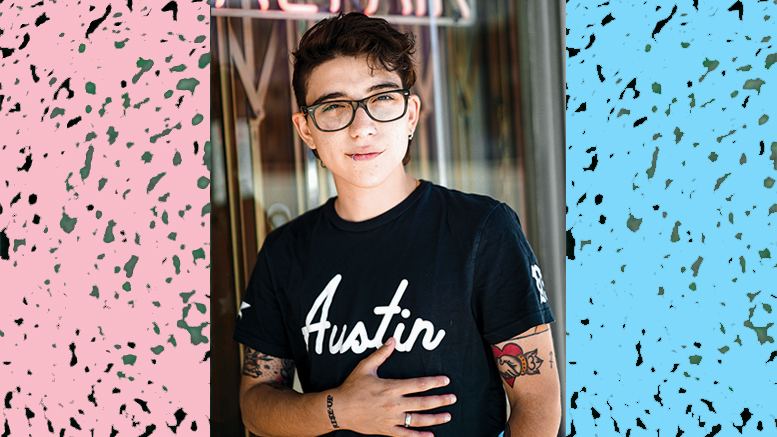 Transgender Sensation Ryan Cassata on his career and his recently released single "Daughter." Click to listen link to the video/song. Photo: Maxine Bowen

At just 23 years old, Ryan Cassata has already left a footprint big enough to last a lifetime. This internationally acclaimed transgender singer-songwriter has garnered the attention of millions and has the awards to prove it. Perhaps what makes Cassata most appealing is the command of his musicianship and music video artistry, which he uses to create social awareness. For instance, his 2012 YouTube video “Hands of Hate” is a tribute to LGBT Youth whose lives were cut short due to either murder or suicide. He didn’t only sing and star in this music video, but his passionate delivery of the message is exceptional. Ryan also believes in paying it forward every time he can. He donated partial proceeds from “Hands of Hate” to the Trevor Project, an LGBTQ Youth Suicide Prevention organization. Cassata is not just an extraordinary musician, he is a trailblazer indeed.

Based in Los Angeles, this Long Island native came out publicly at 13 and went on to share his personal gender-bending story via high-profile TV appearances, such as The Larry King Live Show and The Tyra Banks Show.

If you don’t know Ryan by all of the above, you may know him through his success in film and his award-winning performance in “Collective: Unconscious,” or his role in “Songs for Alexis,” which screened at seminal film festivals such as Frameline, Raindance, Toronto Hot Docs, and DOC NYC, among others.

Cassata’s fascinating life journey will soon be chronicled when his memoir is released within the next year. In the meantime, The Rainbow Times recently caught up with Ryan to find out what he’s up to personally, professionally and to get an inner glimpse of what was really behind the release of his emotional single “Daughter” (video link below).

A: I moved to LA in December of 2016 and I lived in San Francisco before this. I moved here because it is a hub for all creative industries and I love them SoCal vibes.

A: I would say I’m an approachable person and so are a lot of indie artists. We want to play shows. We want our names to get out there. I communicate with my fans as often as I can. I am not hard to reach.

Q: Who did you write “Daughter” for?

A: I wrote Daughter for my dad. It’s the song that tells the story of his transition with my transition. I’m female-to-male transgender. I’ve been living as Ryan for the last decade. My dad struggled a lot, and this song brought us both a lot of closure with his struggle.

Q: Some lyrics to “Daughter” could be applied to various transitions in life. Do you think about the reach your songs could have on the mainstream (non-trans) community or when you write these pieces, are you focusing strictly on the trans experience?

A: This song I wrote for my dad. When I wrote it, I was only thinking about my dad. When I finished it, I realized that it could probably help other trans people as well. I don’t have many songs about being trans, so I would say that most of my songs are universal topics, they can be for everyone. Going back to “Daughter”, I think that a lot of people know a trans person who is out now. I think this sound could help a lot of people better understand trans people. It’s only my experience, but a lot of people have shared with me that it’s also their experience as well.

Q: Clearly, you’re a very talented artist. Have you seen movement from the mainstream community toward your music? If so, what has the response been? If not, why do you think that is the case?

Q: What do you think is the greatest misconception people have about you?

A: I think that people think I hate testosterone but I don’t. It’s just not the right choice for me to go on T right now. I have tons of friends that are on the hormone and I support them 100%. I’ve given several of my friends their shots as well.

Q: When will your memoir be out?

Q: Why do you think it’s important to share it with the world? What do you plan to accomplish with it?

Q: What song of yours has been the most successful thus far (in terms of awards, BillBoard, etc.)?

A: “Daughter” has been the most successful so far as it has had the most plays in the shortest amount of time and was featured in several large publications. Not only was it successful in that regard but more importantly, it was a success at helping other people. Dozens of people came out to their parents after hearing the song. And, a lot of people wrote me privately that the song has saved their life. It’s been an incredibly touching experience and I’m so truly grateful for it.

Q: Since coming out as trans when you were so young and standing tall in the shoes you were given fearlessly, what is the best advice you can give to trans youth who are scared to live authentically?

A: You have to do what makes you happy and you can’t hold back who you are. Just be yourself and be kind to others. If you lose a friend because you came out, [then] they weren’t really a friend, to begin with. Your true friends will stay.

Q: What do say to other trans musicians who are just starting in the industry and how to break into it?

A: Be kind to other people. Say thank you and work on your art and pushing your career every single day.

Q: If you hadn’t pursued a career in the music industry, what would you had done or was there anything you’d planned to do other than being a singer/songwriter/producer?

A: I’m also an actor and writer. I think I’m doing everything I’m supposed to be doing. For a brief time I wanted to be a politician, but I don’t think I’m cut out for that type of job. [Laughs]

A: My music: Honest, Acoustic, Punk. Self: Empathetic, Confident, Brave.

Q: What is something about yourself that people would be shocked to know?

A: I call my parents on the phone every single day by choice.

Q: Which of your songs is your favorite or your top 3?

Q: For those pining for you out there, are you available?

A: [Laughs] Yes, I am single but totally married to my career.

Q: Where can people buy your music?

A: ITunes & Amazon or stream it on Spotify. There are also physical CD’s [available] here: ryancassatamusic.bigcartel.com.

Q: Do you have any shows coming up in New England?

A: None in New England yet. I hope soon! I love Boston. I’m a huge Red Sox fan.

Q: We know you have been very busy and recently scheduled a West Coast Tour, can you share the dates to it/them? Where can people get tickets?

To check out the vid for “Daughter”, click here. For more information about Ryan Cassata visit: ryancassata.com.