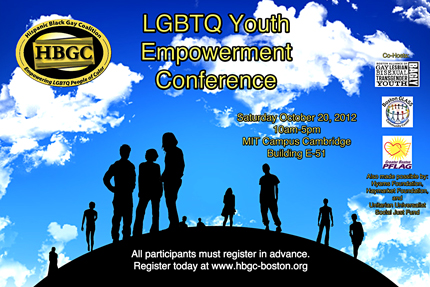 BOSTON, Mass. — Janet Mock, People.com Staff Editor and nationally-renown transgender activist, will give the keynote address at the Hispanic Black Gay Coalition’s 2012 LGBTQ Youth Empowerment Conference. The free conference, which takes place Saturday, October 20, 2012 from 10 a.m. to 5 p.m., educates and inspires LGBTQ youth of color under age 25 to use their ideas, knowledge and skills to create personal and social change.

Mock, a transgender woman of color, uses media as a platform to explore and challenge “society’s limited portrait of womanhood.” Her #GirlsLikeUs campaign empowers trans women to speak up and out about their experiences and lives.

With school back in session, the LGBTQ Youth Empowerment Conference is an important opportunity to talk about what it takes to help LGBTQ youth of color be informed and aware, healthy, safe and supported.

According to the Gay, Lesbian and Straight Education Network’s 2009 report “Shared Differences: The Experiences of Lesbian, Gay, Bisexual and Transgender Students of Color in Our Nation’s Schools”, across all non-white racial and ethnic groups, sexual orientation and gender expression were the most common reasons LGBT students of color reported feeling unsafe in school. The report also highlights how verbal harassment, physical violence and/or discrimination because of sexual orientation, gender expression and/or race/ethnicity often has more negative effects on the classroom performance and overall attendance of LGBTQ youth of color than their white counterparts.

As a transgender woman of color, Mock understands and empathizes with the struggles LGBTQ-identified youth experience.  “In my

Janet Mock , a transgender woman of color, will be the keynote speaker for the 2012 HBGC’s LGBTQ Youth Empowerment Conference, held in October 20th.
Photo by: HBGC

freshman year of high school, I began transitioning from Charles to Janet. So I had a choice to make. I could pretend to be something I was not, butch up and blend in with the crowd or I could fight the hardest fight there is — stick out and live my truth and be my authentic self. I chose the latter.”

To live authentically, fully incorporate themselves into society, and be personally and professionally successful, LGBTQ youth of color need culturally-competent programs and services, peer and adult support, and safe spaces to connect with information, resources, and relationships that improve their livelihood. With the support of her mother, peers and tolerant teachers, Mock transcended the obstacles of transitioning as a teen, and says her decision to come out and advocate for equality and inclusion for LGBTQ-identified individuals came from a recognition of a need for more positive role models for LGBTQ youth, something she lacked as a youth.

“I know that it’s so much more than me, so much more than my story, so much more than trying to gain recognition for my journey,” Mock insists. “It’s about kids just like me, kids who are still fighting the good fight everyday to just be who they are no matter how different they may seem from their peers. They are the real heroes, and these courageous kids deserve a shining example who can help lighten their load by merely existing and being an inspiration,” she says.

In its second year, HBGC’s LGBTQ Youth Empowerment Conference is a unique opportunity for teens and young adults to come together to discuss identity, orientation, healthy relationships and coming out; use art and self-expression as activism; develop strategies to lead peers in advocating for rights and resources for LGBTQ and other marginalized communities; learn ways to take care of themselves mind, body and soul, and much more. Conference tracks include Social Justice, Health and Wellness, Arts, Advocacy, and Life Skills. Full descriptions of the workshops are available at online at www.hbgc-boston.org/node/502.

This year’s conference takes place on the campus of the Massachusetts Institute of Technology (MIT) in Cambridge, MA. Entertainment will be provided by multi-generational Asian women’s performance troupe Genki Spark, and both breakfast and lunch will be served. Youth can also gather information about programs, services, businesses and organizations that serve LGBTQ youth and youth of color at the conference’s resource fair.