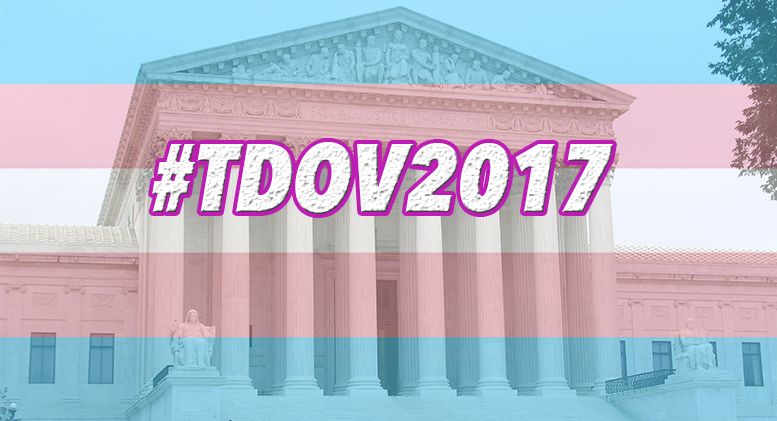 Find out 10 things you can do for Transgender Day of Visibility here.

Each year on March 31, the whole world observes Transgender Day of Visibility to raise awareness about transgender people. On this day, transgender people and allies celebrate the lives and contributions of trans people, while still spotlighting the poverty, discrimination, and violence the community faces.

Created by trans advocate Rachel Crandall, head of Transgender Michigan, TDOV today marks the 7th Annual International Transgender Day of Visibility. Out of the need to portray transgender lives and the lives of gender non-conforming people differently than just shown via media outlets’ violent stories of horrible murders at the hand of trans haters, Crandall created this day. She hoped to create a day where people could focus on celebrating the lives of transgender people, empowering them to be themselves and be seen, while still acknowledging that due to discrimination, not every trans person can or wants to be visible.

Transgender people come from all walks of life—they are moms and dads, sisters and brothers, sons and daughters. They are your coworkers and your neighbors. They can also be 7-year-old children and 70-year-old grandparents. They are a diverse community representing all racial and ethnic backgrounds, as well as faith backgrounds.

International Transgender Day of Visibility is honored every year on March 31 and is a time to celebrate transgender people around the globe and the courage it takes to live openly and authentically, while also raising awareness around the discrimination trans people still face.

From the Trans Student Education Resources, check out 10 Things You Can do for TDOV:

Moms for Transgender Equality: These spectacular and brave moms stand up and speak out in support of their transgender and gender-expansive children.

Follow and participate in the International Transgender Day of Visibility on social media using hashtag #TDOV.

*Excerpts researched by The Rainbow Times along with HRC, GLAAD, and others listed above.

How is #TDOV17 moving via Twitter? Check it out below!

It's Transgender Day of Visibility! Teachers, here's a useful resource for you. https://t.co/LfGdm14W2A #tdov17 pic.twitter.com/qxr3j4G4MX

"I’m strong, beautiful, and talented. I have a purpose to do good in this world and help my community." #TDOV17 https://t.co/mDF4wBKPC2 pic.twitter.com/Wu9TxlL2Wo

On Transgender Day of Visibility, remember that for various reasons, not all trans people can be open about their gender. #TDOV17 #TDOV pic.twitter.com/594Vp0wOaT

"You are beautiful, you are brilliant, and you are worthy of love." #TDOV17 https://t.co/Amj0AlHsar pic.twitter.com/tx09OQadrf

It's #TransgenderDayOfVisibility! Never forget that you matter! #TDOV17
Share your best selfie celebrating the day with us! pic.twitter.com/Qw3gZ4wvNa

Seeing this picture made my day worth it. Stand together. #BLM #BTLM pic.twitter.com/TEReqfATxm