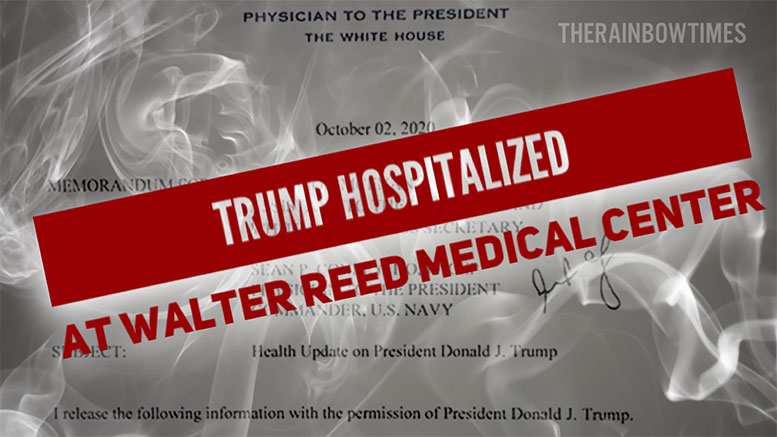 Trump being airlifted by Marine One to Walter Reed Medical Center

WASHINGTON—President Donald J. Trump announced via Twitter in the early morning hours that he, along with the First Lady, have tested positive for COVID-19, something that affects a country already plagued by a poorly handled pandemic under his administration, killing over 207,000 Americans in the process.

As of now, Trump has a fever and is being taken to Walter Reed Medical Center for several days, according to breaking news from CNN. The White House is still reporting that there will not be a transfer of power.

Jeremy Diamond, CNN White House Correspondent, is expressing that this must be a “serious development” that is concerning enough to airlift Trump to the medical center.

A close source to the WH says now that the president is “spooked” by the diagnosis. Every single person that is traveling with Trump is now wearing a mask for the first time ever, according to the media outlet. And, right after being taken to the medical center, he tweeted the following video.

Trump was given the highest dosage of the experimental Regeneron’s polyclonal antibody cocktail as a “precautionary measure.” 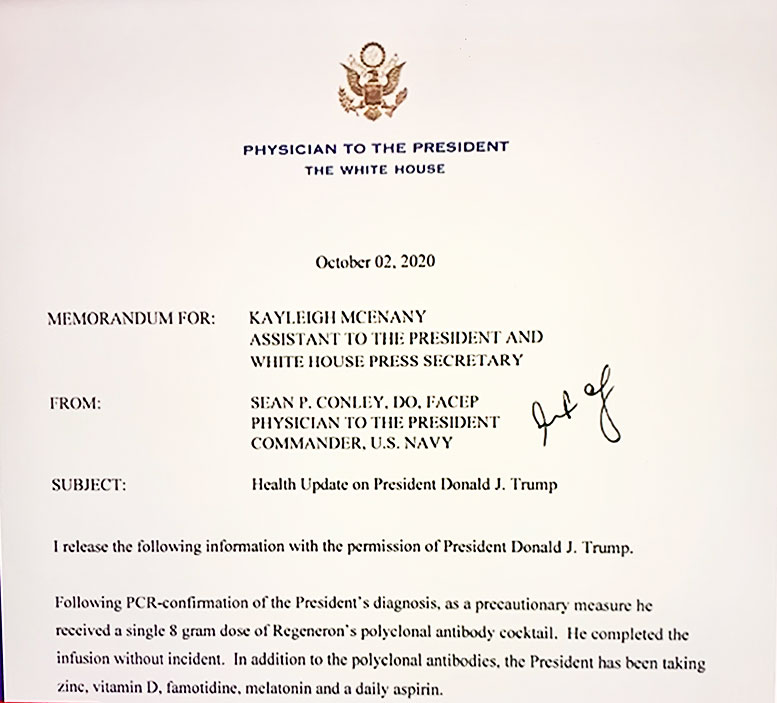 CNN earlier reported that meetings that were supposed to take place with Trump are instead being held by Vice-President Mike Pence. The president scheduled call about coronavirus support for seniors was not one he participated in. The Trump campaign announced that all previously scheduled events are now postponed or will be virtual.

The country, experiencing domestic chaos over the handing of the pandemic, massive protests over police abuse against communities of color, open calls from Trump to white supremacist groups—leading to a deep country-wide divide—voter suppression, etc., is now dealing with how many infected officials may the Trump campaign have infected others. Trump has repeatedly told his supporters not to wear masks and undermined medical experts’ advice to have a national mask mandate in place, something former Vice-President and current presidential candidate, Joe Biden, had been speaking about just last month and in the months since the pandemic hit the USA.

“Every single American should be wearing a mask when they’re outside for the next three months, at a minimum,” said Biden according to CBS News in August 2020. “Every governor should mandate mandatory mask-wearing,” suggesting that widespread mask use could save 40K lives over the next three months. “Let’s institute a mask mandate nationwide starting immediately, and we will save lives.

“His own head of the CDC said, ‘if we just wore masks between now—if everybody wore a mask and social distanced between now and January,’ we’d probably save up to 800,000 lives. It matters.”

But, Trump himself was, according to a recent study by Cornell University researchers, the main channel spreading misinformation about the virus and conspiracy theories. And, according to the Washington Post, Fox News falsehoods about the virus initially “may have kept millions from taking the pandemic threat seriously.”

“The biggest surprise was that the president of the United States was the single largest driver of misinformation around Covid,” said Sarah Evanega, the director of the Cornell Alliance for Science and the study’s lead author, to the New York Times (NYT). “That’s concerning in that there are real-world dire health implications.”

Since news hit the web, the stock market appeared to plummet early Friday after the country first heard about Trump’s positive test results. The Dow has already dropped 400+ points, which will further change as the market opens, according to the USA Today.

“Futures connected to the NASDAQ and the S&P 500 signaled sharp drops,” read the publication’s report.

Trump didn’t listen and knew about the pandemic in Feb. 2020

The pandemic has killed more than 1 million people worldwide and currently shows little to no signs of stopping in the United States, according to indications that its second wave is near hitting, if not there already, in some states across the nation. Trump admitted to Robert Woodward, Pulitzer Prize winner, author, and investigative reporter (and one of two reporters who broke the news of former Pres. Richard Nixon’s Watergate scandal) via a recorded interview to knowing of COVID-19 in February and explained then how deadly it was. In fact, he told Woodward that he had to “downplay” the news of it to the American people to avoid chaos.

“It’s more deadly than your strenuous flu. … I wanted to always play it down. I still want to play it down because I didn’t want to create a panic,” he’s heard telling Woodward.

Tonight, @FLOTUS and I tested positive for COVID-19. We will begin our quarantine and recovery process immediately. We will get through this TOGETHER!

The positive diagnosis comes at a time when most of the West Wing could have been exposed to the coronavirus too, possibly placing Vice-President Mike Pence at risk. The New York Times has reported that the country is at its weakest at this point. News commentators via CNN said that Speaker Nancy Pelosi (D-Calif.) could be the sole person, third in command, who could lead the nation if both Pence and Trump are compromised, something that may hinder their ability to lead the nation at this time and in the weeks ahead. At this point prior to experiencing symptoms, Trump’s White House physician Sean P. Conley said “rest assured I expect the president to continue carrying out his duties without disruption while recovering, and I will keep you updated on any future developments,” he said via a statement.

Trump’s age and co-morbidities place him in the highest-risk category for serious complications, reported CNN. Trump is 74 years old.

Making fun of Biden for wearing mask, others

At political rallies yesterday and the nights before, Trump was making fun of Biden and how the former vice-president’s rallies were barely attended due to how far away Biden kept himself from the crowds or how he campaigned online. During Tuesday evening’s presidential debate, Trump mocked Biden again for “always” wearing a mask when campaigning.

“Every time you see him, he’s got a mask,” Trump said during the presidential debate. “He could be speaking two hundred feet away from it. And, he shows up with the biggest mask I’ve ever seen.”

A CNN report said that “the most dangerous thing Trump may have said on Tuesday night—in terms of actually endangering the lives of people who were watching—was his continued skepticism of mask-wearing and mockery of former Vice President Joe Biden’s regular use of masks.”

Trump also made attacks against governors from Democratic cities via Twitter soon after the coronavirus hit such states, claiming that they just did not want to re-open the economy. His supporters, led by his words, started protesting closings by those who believed the WHO, CDC, and national concerns of various experts in medicine and any research that would disagree with his personal assessments about it.

“When somebody is the president of the United States, the authority is total and that is the way it’s gonna be,” Trump told reporters. “It’s total. It’s total. And the governors know that.” Four days later, he was tweeting demands to “LIBERATE” various Democratic-led states that had seen armed protests against the coronavirus lockdowns.

This breaking news development comes out after it was revealed last night that Hope Hicks, a top advisor to the president, had tested positive for the virus yesterday. The extent to which Trump, the First Lady, or members of his inner circle, and administration may have infected hundreds of people in the White House and thousands more through his political rallies is unknown at this time.

This is a breaking news story under development. More on the New York Times.