The protestors met at the former address of the late Lieutenant Tony F. Flaherty U.S.N. Tony was the beloved member of Veterans For Peace who passed away peacefully in July 2015.

This year, Veterans For Peace had applied to walk in the Saint Patrick’s Day Parade but once again were denied by the Allied War Veterans Council. VFP’s unit was to be named as a Memorial Unit in honor of Tony.

“Tony was one of our most respected members,” said Al Johnson a member of VFP’s Executive Committee. “Tony is sorely missed by our members. It is shameful that the AWVC still denies veterans who have honorably served this country, and now work for peace, from participating in this parade.” 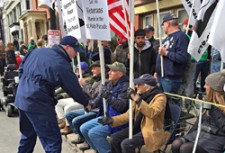 A Coast Guard sailer who broke ranks to come over and show his support.
Photo: Boston Bulletin Reporter

Members of Veterans For Peace silently stood outside of the former home of Flaherty, in solemn protest as the parade passed by. They carried their VFP flags, American flags and signs for parade participants to see.

“It is shameful that the Allied War Veterans Council are once again disrespecting veterans on Saint Patrick’s Day. What are they afraid of? Our rejection is solely based on the fact that we work for Peace,” stated Pat Scanlon, event organizer for VFP. “This continues to be an embarrassment to the City of Boston and the Boston Police Department.”

“It is ironic that Tony Flaherty was best of friends with John ‘Wacko Hurley the long time Commander of AWVC. They were best men at each other’s weddings. Over the years they parted friendship, as their views on war and peace grew apart”, stated Scanlon. “How fitting it would have been to honor both men in this year’s parade with resolution of this long-standing conflict.”

The intransigence of the AWVC, their continued disrespecting of veterans and the embarrassment they bring upon the City of Boston should stop,” stated Al Johnson, member of the Executive Committee of the local VFP chapter. “The City of Boston should take back the management of the Saint Patrick’s Day Parade, making it open and accessible to all, allowing all to be part of the historic celebration of the patron saint of Ireland, Saint Patrick, especially our veterans.”

During the Parade, VFP’s messages were clear, “stop the exclusion of Veterans For Peace in the parade.”

Police Commissioner Bill Evans when he walked by and shook my hand said, “Next year Pat, next year.”

A number of Army, Navy and Coast Guard parade participants went over to the protestors and shook their hands in support. Scanlon said they received a lot of salutes and waves by veteran units and active duty units.