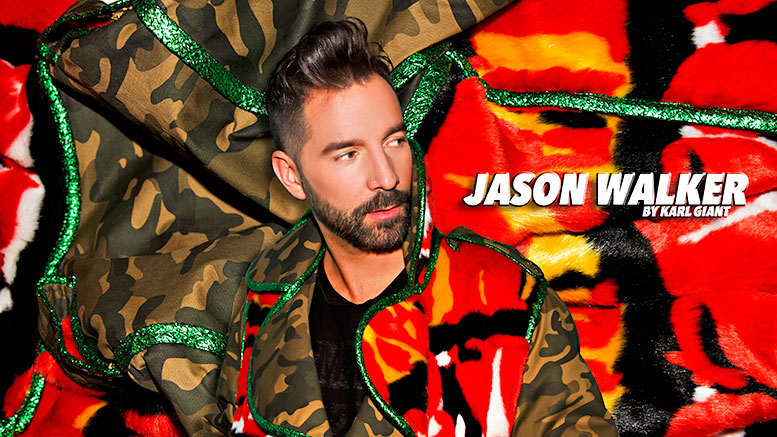 Fully Out Singer, Jason Walker, Revs Up the Dance Floor with New Album In 2020

By: Brian Sterling/Special to TRT—

Jason Walker believes the road towards music stardom would have been smoother if he were a straight man or woman. “It’s been tough finding my place,” he admits, “especially coming out as gay long before it was deemed acceptable.”

It’s been fifteen years since he first skyrocketed into the music scene with his debut album, “This Is My Life”, and in that time the Out Music Award winner has landed in the Top Ten on the Billboard dance chart an outstanding eleven times—with five of them at #1! However, the one thing that has eluded him is mainstream stardom. With Jason Walker’s fourth full-length studio album set to release in early 2020—his first in ten years—and the positive buzz, it is receiving from industry insiders who have heard it, he is feeling optimistic that it may happen now or never. “Now or Never” is also the name of the album’s first single.

We spoke with Jason Walker from his New York home.

Q: Your latest single, “Perfect Bitch” is being considered for a Grammy nomination.
Jason Walker: A Grammy win would mean everything to me! I mean, I’ve dreamt, imagined, hoped and prayed for it since I was a child. It would mean respect. To be respected by your peers within this business; respected by other singers and writers, people that I’ve looked up to my whole life is something that I’ve always strived for as well. That’s really what it boils down to.

Q: It came so close to hitting the #1 spot on Billboard, peaking at #2. Were you disappointed?
A: Listen, after you have a number one record, that’s the only place that you wanna be. My last three have gone to number one and I feel extremely blessed by that. With “Perfect Bitch”, the competition was just so intense. We were up against the heaviest hitters like Madonna, Whitney Houston, and Kygo, Sting, Katy Perry … So no, I’m not bummed that it didn’t go to number one because look at the company the song was in.

Q: Do you really feel that coming out has prevented you from reaching your true potential as an artist?

A: I think if I were to come out today, things would be a little easier for me. Queer artists are so much more accepted than they were 15 years ago when I started out. My sexuality was a hindrance at the time. It was seen as taboo.

Q: Have there been situations in which there have been gatekeepers in music, gay or straight, for whom your sexuality has produced a difficult dynamic?

A: I recall a situation that I’ve never spoken of before. It was nine years ago and I was at the Billboard Dance Music Summit in Las Vegas. At the time, I had a few Top 5 dance records under my belt and even two number ones. I spoke on a panel and I was my usual self but later, I was told that I had made someone feel uncomfortable because I was “too gay.” I was astonished. This was a dance music summit! I told the messenger that I had no intention of altering my personality and that they could politely relay my message to the offended person to f$% off!

Q: Does homophobia still exist in the music industry?

A: Yes, yes and yes. Some people try to mask their homophobia so that they can fit into the mix while others are overtly blatant with how they feel. My opinion is this: if you are in the entertainment world, whether in design or production, you are going to have to deal with gay people. If you can’t show us respect, then you’re in the wrong business. You should be selling tires.

Q: What sort of camaraderie is there between queer artists?

A: Oh, I wish that there was more camaraderie. When I do a show and I see other queer artists in the crowd supporting me, that’s the best feeling. We all have insane schedules so it’s often hard to make someone’s performance but even commenting on social media is really important. We need to be there for each other.

Q: Your next single release will be “Now or Never.”  Is that how you’re feeling today?

A: (Laughing) Ever since I moved to New York, it’s been a now or never scenario. Every day. We’ve all got to do something new to progress every day, whether it’s sending an email, making a phone call, or putting pen on paper. We’re all the same with our backs always up against the wall, striving to make the most of our time. The goal is not really about going mainstream. It’s just about being present and reaching as many people as I can.

A: It’s an exciting time to be queer. We have so much great representation from Billy Porter to Mila Jam, Ari Gold, Coby Koehl, and Laverne Cox. Everyone’s doing their thing, making noise and making waves. We didn’t have that fifteen years ago!  It was so much harder. Not to say it’s easy now, but it’s easier than it was. My hope today is that the community comes together more. We need to support every beautiful letter in the LGBTQ community because honestly, we are all we have.