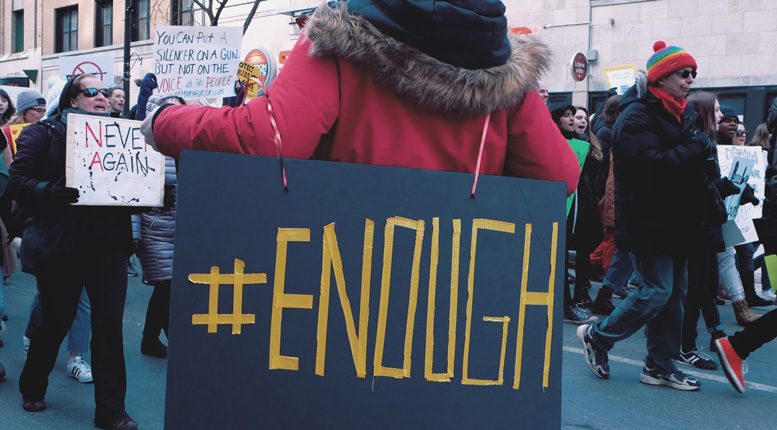 Gun Violence in the United States; Domestic Terrorism and the inciting of it all

I am exhausted of reading, watching and listening to news of representatives of this country express “deepest sympathies” to families, friends and neighbors of another 34 more casualties and dozens more injured in the latest round of domestic terrorism mass shootings, as if it were as normal as drinking that first cup of coffee in the morning. As Americans, we should be disgusted, we should be taking to the streets religiously in protest of the atrocities that have been committed and encouraged under this “president.” We have the highest incidence of gun violence in the world and 3 mass shootings in the last week alone—Dayton, Ohio, El Paso, Texas, and in Gilroy, Calif., last Sunday, July 28.

Let’s call this for what it is (emphasis added): White Supremacist Domestic Terrorism. That’s what this is and the greatest ring-leader of all has been Trump with his outwardly racist, homophobic, transphobic, anti-immigrant, Islamaphobic, Xenophobic and misogynistic, touts, chants, tweets and signaling to others that this hatred, this vile behavior is not only encouraged, but accepted. The man who has the world’s biggest stage uses it to incite hatred and violence against the most vulnerable among us.

Some will read this and claim that you can’t blame Trump. I do blame him. He has emboldened and encouraged this behavior. He caused it and so have the members in Congress who have refused to change gun laws (read Mitch McConnell). There is no nation in the world that has the level of mass shootings that we do. This is not a normal discourse. People act on their own cognition, of course, but if you’ve been watching or reading any credible news platform, there are clips after clips, tweet after tweet of Trump inciting “exactly” this behavior.

As a matter of fact, the El Paso shooter’s anti-immigrant 2,300-word manifesto closely “mirrored Trump’s rhetoric, as well as the language of the white nationalist movement, including a warning about the Hispanic invasion of Texas,” the Washington Post reported.

And, I am furious.

I am furious that this “president” is still sitting in that White House after all he has done to incite violence and hatred.

I am furious that there are some people in this country that will continue to support him no matter what he does.

I am furious that he never seems to be held accountable and when he is, someway, somehow, he weasels his way out of it and hides behind the desk of the presidency.

I am furious that people that I love are under constant attack by this man who takes aim at any grandstand.

I am furious that Congress has grossly neglected to do its job to hold this president accountable.

I am furious that as a global superpower, we are the least safe we’ve ever been because Trump would rather play a game of chicken with dangerous world leaders than be diplomatic.

I am furious that our elections, according to the Mueller Report, are still being interfered in by the Russians and will likely be hacked again in 2020.

I am furious that kids are scared to go to school and learn and instead have to take active shooter drills because our lawmakers refuse to act.

I am furious that just last night, I was awakened in the middle of a sound sleep by what I thought could be fireworks but bolted out of bed concerned they were gunshots.

I am furious that immigrant kids are in cages and separated from their parents for seeking asylum, a legal process enabled under our constitution.

I am furious that some lives matter and others don’t.

I am furious that more people aren’t doing something.

I am furious that there are so many who choose to “turn it off because they can’t handle it.” That is the very definition of privilege.

I am furious that my family and I have legitimately considered immigrating to another country if Trump gets in office for another four years.

I’m furious that nothing is being done about gun control and that the NRA still gets away with it.

I am furious from these and so much more.

According to Terrorism experts, “extremists who don’t know each other in real life are finding one another online and trying to ‘one-up’ the attacks” reported MSNBC.

“At any time around the world there may be one or two extremists that are thinking about an attack. When they see someone in their ideology successfully conduct an attack, it inspires others,” he said to the news outlet.

James Cavanaugh, former special agent-in-charge with the Bureau of Alcohol, Tobacco, Firearms and Explosives also said to MSNBC that the messaging used—in what I am, and others are referring to as Domestic Terrorism—“feels familiar to those used in pamphlets spread by the KKK and white nationalists during the 1970s … but given new reach in the digital age.”

“These guys can reach out to any soul on the Internet and poison them,” he said in the report. “It’s digital hate.”

Everyone is asking the same question: How many lives have to be lost for us to do something about it?

For the first time, Democrats, some Republicans and Independents are coming together to combat the hateful rhetoric coming from Trump and his cronies. As matter of fact, several Republicans in Congress have announced they will not seek re-election, likely because of all that has transpired over the past several months and years under this faux presidency.

Perhaps most comforting relief I’ve found was when I read a statement from President Obama, who hasn’t made a political public statement since 2017.

Not mentioning Trump by name, per se, Pres. Obama sharply criticized the type of inflammatory rhetoric about immigrants and ethnic minorities, a staple of what has been demonstrated during Trump’s reelection campaign.

“We should soundly reject language coming out of the mouths of any of our leaders that feeds a climate of fear and hatred or normalizes racist sentiments; leaders who demonize those who don’t look like us, or suggest that other people, including immigrants, threaten our way of life, or refer to other people as sub-human, or imply that America belongs to just one certain type of people,” Pres. Obama said.

Calling it like it is, our former President also compared these white nationalist shooters to “followers of ISIS and other foreign terrorist organizations,” acknowledging that they “may act alone, but they’ve been radicalized by white nationalist websites that proliferate on the Internet.”

Hearing from Pres. Obama, my president, a true beacon of hope in this time of extreme duress reminded me of what true leadership looks like and where we must and can get back to.

“We are not helpless here,” Obama said in the statement. “And until all of us stand up and insist on holding public officials accountable for changing our gun laws, these tragedies will keep happening.”

* Nicole Lashomb is the Editor-in-Chief of The Rainbow Times and Co-Executive Director of Project Out. She obtained an MBA from Marylhurst University and BM from the Crane School of Music/SUNY Potsdam. Nicole can be reached at editor@therainbowtimesmass.com.

[This editorial was originally published in the Aug. 8, 2019, issue of The Rainbow Times.]