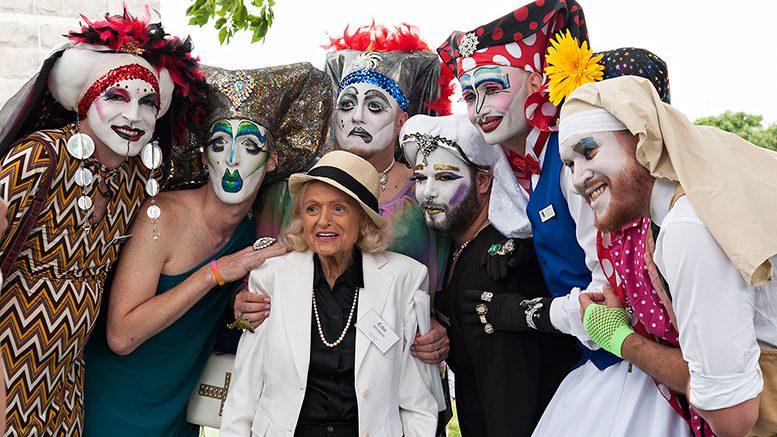 By: Mike Givens/TRT Assistant Editor—
It’s a difficult time to be a cisgender, heterosexual, able-bodied white male. Since the election of President Donald Trump and the subsequent stepping down of former President Barack Obama, this particular subset of American culture has felt emboldened to take back “their” country. Hate crimes against a number of groups have gone up, pundits regularly lambaste “political correctness” as an attempt to silence their bigotry, and, in general, so many people think that it’s open season on those who’ve been historically silenced and oppressed.

Surf a mainstream news website on any given day and you’re sure to see stories of white people calling the police on black people who are just living their daily lives. The media is saturated with Trump’s racism and intolerance towards Central Americans coming across the southwest border. LGBTQ people are extra vigilant about their rights. Women are boldly asserting their right to self-determination and freedom from harassment through the #MeToo movement. We live in a nation where the person who occupies the highest office has successfully been able to turn people against one another and empower the bigotry and hatred of those who feel as though they’ve lost control of this country.

And here comes the Straight Pride Parade (SPP), a pathetic attempt by straight, conservative white men who feel so threatened by advancements in LGBTQ rights, that they must throw their own public spectacle to proclaim to the world that their virility still exists. Let’s be clear: The August 31 “parade” is nothing more than a desperate attempt by these men to cause division and re-assert their dominance at the top of the social pyramid. The SPP is what a temperamental child does when he feels as though his parents are ignoring him. It’s a tantrum.

There will always be people like this in the world. They thrive and bask in their privilege, their dominance, their sense of superiority, and when a group of marginalized people comes forward to assert their rights, to celebrate their uniqueness and take pride in their culture, the tantrum starts.

Enter the Sisters of Perpetual Indulgence, a well-known “ … areligious Order of Queer, Clown Nuns who pledge ourselves to promote Universal Joy and to eliminate Stigmatic Guilt.” 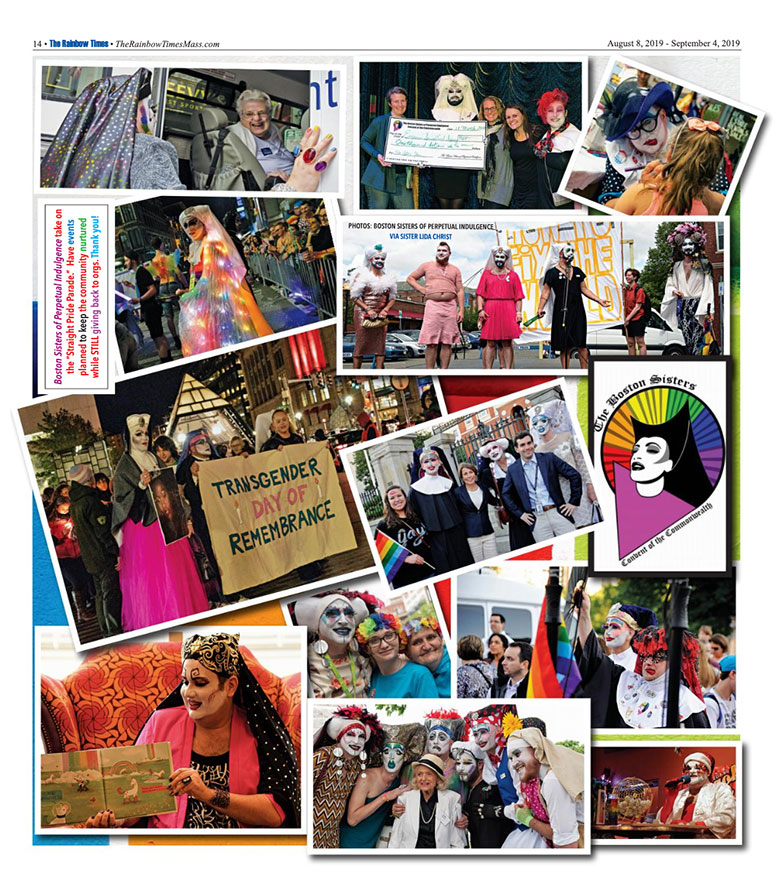 While a small and sad contingent of men and women march the Boston Pride Parade route on August 31, the Sisters will be throwing their celebrations in Boston.

“We all deserve to feel heard, seen, and safe,” said Sister Lida Christ, a co-coordinator of the event. “The Sisters believe in expiating stigmatic guilt and promulgating universal joy. Part of accomplishing this mission is creating safe spaces for the community to come together and share. As the sacred clown, we offer ears to listen, arms to hug (consensual), strength to lean into the things that hurt us, and light to shine into the darkest parts of our reality and spirit.”

From August 29 to September 1, the Boston Sisters of Perpetual Indulgence will hold a series of fun, inclusive activities in the Boston area to provide a safe space for LGBTQ people. The event will kick off that Thursday with the “RE-Sister night at Flatbread Pizza Company” in Somerville. The event begins at 5 p.m.

“The Boston Sisters will host a night of bowling, drinking, and dining. Come to Flatbread Pizza Company in Somerville, Mass. as we make space for you to communicate, socialize, be heard, and to gather,” reads the description of the event.

Throughout the rest of the weekend, the Sisters have lined up several exciting events including a blessing at the AIDS Memorial Tree, a “Bar Ministry” that will see the nuns offering a tour of Boston’s gay bars, and a Parade Day on Saturday, August 31 from 10 a.m. to 4 p.m. where meditation tents will be set up to offer safe spaces for LGBTQ people who need someone to talk to.

An interactive art installation event will be premiered at the Parade Day. The Veil of Guilt and the Veil of Joy invites participants to write down one thing that someone has said to you that made you feel guilty and that you believe; you’re also invited to write one thing that you love about yourself and/or brings you joy.

Sunday will see a brunch crawl where the Sisters will make themselves available to discuss the events of the weekend and offer more safe spaces for LGBTQ people.

More details can be found about the weekend on the Sisters Facebook page.

“Boston is made strong by the diversity which comprises her,” said Sister Lida Christ on her feelings about the Straight Pride Parade. “We all deserve to celebrate what makes us unique. Personally, I can not tolerate the appropriation of any type of Pride, or the twisting of it into a platform to serve other motives and agendas.”

The works of the Sisters will be much-needed during that weekend, and year-round. The trauma that we LGBTQ people face from bigots and hatemongers requires us to come together for the sake of building community, supporting one another, and propping each other up. We see our best version of ourselves when we serve others.

“Safe spaces should not be partisan,” the Sister said. “I think we need to start thinking as a collective. We are not isolated or insulated from trauma. When someone in our community is hurt, scared, or marginalized, we are all affected. Safe spaces should not be provided, they should simply exist. As Sisters, our job is to promulgate this truth by actualizing it into the world. Just remember, you are important, we see you, you are smart, and you are enough.”

*A graduate of the Boston University College of Communication, Mike Givens has been a social justice advocate for 11 years. During that time he’s worked on a range of initiatives aimed at uplifting marginalized populations. An experienced media strategist and communications professional, Mike currently devotes his spare time to a number of vital issues including racial justice and socioeconomic equity.

Welcoming Sisters from around the US to participate with you.

Event: Blessing at the Aids Memorial Tree Where: Club Café (pending confirmation) Timeline: 5:30-6 p.m.; What: Glitter Blessing, and calling of the corners, spirit, ancestors to watch over and protect the community. Where: The tree is in the Charlesgate East to Mass. Ave block of the Mall that was planted in 2012 by the Sisters of Perpetual Indulgence which I guess would be considered an LGBTQ organization. The tree was dedicated to all those who lost their lives to HIV. It is the first tree on the Northside behind the Leif Ericson.

Event: Bar Ministry; Where: Various LGBT and Allied establishments around Boston and Cambridge. Timeline: 10 p.m. – 2 a.m.; What: For the energizer nunnies we will offer a tour of Boston’s gay bars. We will be present in queer spaces to listen to anyone who is in need of a person to talk to.

Event: Parade day; Where: Aids Memorial tree; Timeline: 10-4; What: We will be offering meditation tents for those who need to hold space. An interactive art installation called the Veil of Guilt and Veil of joy will be present. We invite you all to write onto the veil of Guilt the worst things someone has said to you or things you’ve believed about yourself. On the veil of joy, we invite you to write the thing that you love the most about yourself, or the thing that brings you joy.

Event: Brunch Crawl (POST CARE); Where: Club Café, Trophy Room, Various LGBT and Allied establishments around Boston and Cambridge. What: The Sisters will be dishing up post-care, being present to listen to what people felt, and experienced over the weekend. Timeline: 10 a.m – 2 p.m.

**Historically, The Sisters have given grants to under-funded, smaller organizations and projects providing direct services to our communities. The majority of these organizations and projects receive little, if any, government or main-stream funding and may be in the early stages of development. The grants are typically $250 to $1,000. In their Grant Fund’s first five years, The Boston Sisters have disbursed $25,000!

“We are especially attracted to progressive projects that promote wellness, identity, tolerance, and diversity within our communities. We have a vision that encompasses diverse communities and groups that have a common interest in human rights——people of every gender, gender identity, race, class, age, and sexual orientation.”

Grant funds will be awarded to select not-for-profit community benefit organizations which are incorporated and have IRS 501(c)(3) designation. Potential grant recipients must submit their requests using the designated Application Form along with required attachments and supporting documents. The Application Form must be completed in its entirety by the deadline so that the Boston Sisters’ 2017 Grant Funding Committee can review your not-for-profit organization’s purpose, charitable goals, and intended use of grant funds and to ensure these works coincide with the worldwide mission of the Sisters of Perpetual Indulgence as an order of 21st century nuns who minister to the needs and free expression of all aspects of the community in the Boston, Massachusetts area.

Are you interested in becoming a community partner of The Boston Sisters? For more information or to request our presence at your event, please send your contact information and date, times, duties, etc. of the event to info@TheBostonSisters.org.

**Written by the Sisters of Perpetual Indulgence. Edited for space constraints by The Rainbow Times.