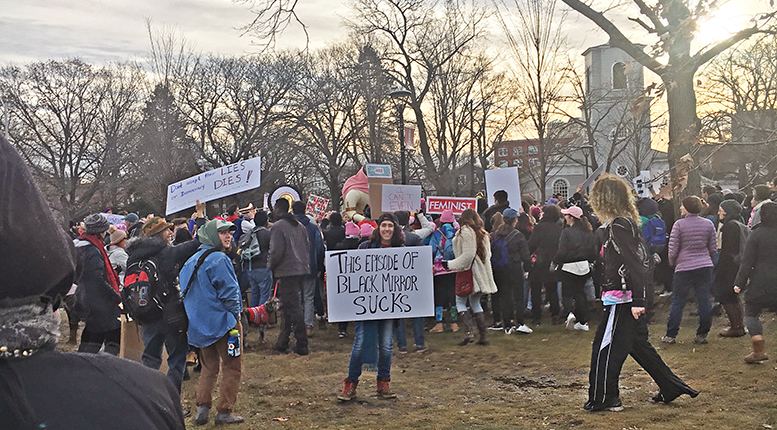 The January 20th nationwide Women’s March has seen some attendees leveling accusations of transphobia and racism at organizers of local demonstrations across the country.

Boston’s march this year took place on the Cambridge Common and had an estimated attendance of 175,000 people. It accompanied 33 other “sister marches” in the New England area. Last year’s Women’s March was the largest organized protest in United States history and saw around five million participants protesting sexism and the Trump administration worldwide. This year’s March was the second-largest, with around 1.5 million participants.

However, some claim, for example, that the “pussy hats,” pink hats with cat ears, and similar signage are transphobic as they insinuate that the vagina is the only indicator of womanhood and excludes the identities of transgender women and non-binary people.

“The main problem I did see was generalization; it can be done in inconsequential ways people wouldn’t think of—like the pussy hats,” said Maris McGuinness, a student at Northeastern University. “It acts like a symbol for the movement when, in reality, that symbol isn’t inclusive.”

“The Women’s March seemed to be a party that only cisgender white women were invited to,” said Jack, who uses the pronouns they, them, and their.

Jack attended the Boston Women’s March in January 2017 but chose not to attend this year. “This [is] upsetting considering how much work trans women, women of color, and poor women have put into the feminist movement” they continued.

“When I attended … I was struck by the abundance of signs and messages that seemed to only [cater] to cis women,” they said. Jack later described the event as being “vulva-centric.”

“Womanhood and femininity [don’t] apply to one type of person because womanhood is not rigid,” said Jack. “Being a woman means so many things, and one symbol can’t encompass that.”

Although the hats emerged as, “a symbol of support and solidarity” in protest of a highly-publicized recording of President Donald Trump making lewd, sexist, and predatory comments about women, many insist the clothing articles miss their intended “girl power” statement.

“I refused to attend the first March for the same reasons I did not attend this year’s March,” said Nicholas Lewitt, a gender non-conforming student at Oberlin College. “If your feminism isn’t inclusive, it’s not feminism, and it isn’t revolutionary. From all the pink pussy hats and the uterus posters I saw, I think I was right. Not all pussies are pink, not all women have uteruses, and many women would not put reproductive rights as the key issue defining their feminism.”

“I kept asking myself, ‘Where … were all of these people during the numerous other marches for equality, for black and trans lives, [and] for addressing the drastic realities of police brutality and corruption?’” said Steven Schlauch, a graduate student at Boston University. “I chalked it up to yet another form of unintentional ignorance, which can still … be categorized as racism and transphobia.”

“I didn’t observe any instances of overt transphobia or racism this year,” said Annie Thorburn of the New England Independence Campaign (NEIC), a New England–centered separatist organization that participated in this year’s March.

Thorburn said she was on the logistics committee for this year’s Boston March and also served as a stagehand for the speakers. But this, “doesn’t necessarily mean they didn’t occur, of course, but if they did then I wasn’t aware of them.”

Thorburn does say, however, that she wishes to see more representation at the march.

“As far as I’m aware, there were only three trans women and two women of color involved in the organizing of the march.” In the future, she said, she’d like the march organizers to make more of an effort to reach out to marginalized communities.

“We did not hear any complaints directly,” said NEIC in a statement to The Rainbow Times.

Since Trump’s inauguration, NEIC has participated in most demonstrations in the New England area, including the 2017 Tax Day Protest and the 2018 Women’s March, among others.

But NEIC still refrained from wearing the “pussy hats” at the march. “We want to share the message that we are inclusive of non-binary people,” they said. “Three members of the team identify as non-binary.”

“We respect the right of individuals to wear whatever they want in public,” said NEIC, “even if we ourselves disagree with their clothing.”

Patricia Wright, one of the founding members of Indivisible Mystic Valley, a group of Mystic Valley–based activists and one of the participating organizations in this year’s march, thought the event was accepting.

“This … was probably one of the most transgender-positive Women’s Marches in the country,”  she said. “We had multiple transgender speakers, and we closed on a speech from Freedom for All Massachusetts,” a group working to prevent the repeal of the Mass. transgender non-discrimination laws this November.

“In the audience, I am sure there was some transphobia and racism,” she continued. “I have seen a number of virulently transphobic images from other marches. It would be … unsurprising for there to have been such pockets here in Boston.”

These issues didn’t seem to persist at the Connecticut Women’s March in Hartford.

“One of the reasons it didn’t happen here in Connecticut may have been the conscious decision to include people like me and Evelyn Mantilla, the first openly bisexual congressperson in [the state],” said Cassandra Martineau, a transgender woman and one of the leaders of the Connecticut Women’s March.

She attended the national march last year and, after learning about issues of transphobia and racism at marches across the U.S., worked to prevent such instances in Connecticut.

“The real inclusion of [LGBTQ] people in leadership positions, in agenda-setting, in speaker time, all matter,” she said. “Nothing about us without us—and what could be more about our population than a quest for equality and human rights?”

The best way to combat this issue is, to many, simply spreading the word.

“It’s just ignorance,” said McGuinness of the lack of awareness about transphobia and racism. “Educating people on what it means to generalize and what being intersectional means.”

To “reach out to trans women, women of color, and other underrepresented groups from the beginning and actively involve them in the planning of the March,” said Thorburn of NEIC.

Lewitt took a more radical approach in his contention about addressing racism and transphobia.

“Stop inviting the police,” they said. “Stop having predominantly white organizing. Make critiques of capitalism and racism integral and indivisible from your events. And stop honoring racist people like Barbara Bush. If you aren’t fighting for black women or trans women … [and] against cisnormativity and heteronormativity, you can’t claim to fight for women.”