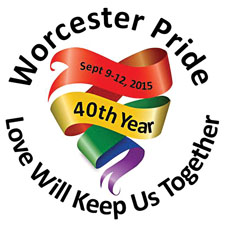 This year Worcester Pride celebrates the 40th anniversary since the first celebration in 1975! The 1975 celebration was about 7 years since the Stonewall riots and about 5 years after Boston celebrated their first celebration. It was also the same year that “Love Will Keep Us Together” was number one on the charts.

Worcester Pride’s theme this year is just that, Love will keep us together! Although few people realize it today, it is also when the first same-sex marriages occurred, but that was quickly stopped and the U.S. would not recognize them as legitimate.

Worcester Pride, WP, recently hosted a film at Clark University called Limited Partnership that will be on public television in the first part of June, just before the Supreme Court ruling.

In 1975, the celebration was small and has waxed and waned over the years. By all accounts it began in Crystal Park, moved to Institute Park and changed locations several times before resting on Water Street. The Water Street celebration made sense, as it was once a central place for gay-owned businesses. About five years ago, for a variety of reasons, the committee voted to change locations to the Worcester Common.

The move also saw an increase in attendance. And this past year, by all accounts, was the biggest celebration in terms of attendance, but also programming and political visibility. The year 2014 also marked WP’s first Youth Pride dance through the sponsorship of the YWCA at Salem Square and very dedicated volunteers. Approximately, 200 youth attend and thanks to APW they got free HIV testing (as an admission discount). Nearly every state-wide political contender was on the stage or in the crowd!

WP, according to its president John Trobraugh, has really seen tremendous growth in these past few years. One reason that can be attributed to it, he thinks, is the location—the increased inclusiveness, partnering with local organizations and going to other regional pride celebrations. You will see (some you already have seen) Worcester Pride represented at NOHO, RI Pride and Boston Pride. We asked our community what Prides they go to and the vast majority go to at least one other pride, but it varies which one. Every year we hear from Worcester area residents that they were unaware of our pride and were glad for our presence at the other prides.

This past year, one additional local organization we have formally partnered with to increase attendance and awareness is the Canalfest Association to co-market and have a shuttle between festival, which WP also coordinated for the same weekend.

This year WP is deepening their relationships, according to Trobaugh.

“In years past we have not had alcohol on the common and that really fits with a family-friendly parade and festival. However, one of the common requests is for something for the over 21 crowd after the festival is over at 6 p.m. I am happy to announce that we are going to use the Canalfest tent to host the biggest block party that pride has ever sponsored! Following pride until 10 p.m. we will have a beer tent and addition musical sets! We hope to get much more engagement since our community asks for this every year!”

Worcester Pride recognizes, promotes, educates and unifies the Central Massachusetts LGBTQ community, allies and supporters. Worcester Pride welcomes participation in and volunteers for community goals and a variety of sponsored events and celebrates those who make specific strides to enhance the visibility of Worcester’s LGBTQ community. The participation of all, regardless of age, creed, gender, gender identity, HIV status, national origin, disability, race, religion or sexual orientation is welcome.