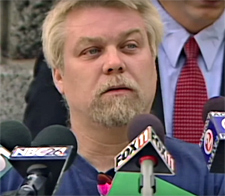 Making A Murderer; Netflix Audience Dramatic Response to the Series

The Netflix documentary series Making a Murderer, directed by Laura Ricciardi and Moira Demos, tears the mask off the criminal justice system and reveals, in clear-cut, heart-wrenching detail, the depths of its inhumanity.

The show is about the case of Steven Avery, a Wisconsin man serving life in prison for a murder he maintains he never committed. In a matter of weeks, it has become one of the most widely watched series on Netflix—and ignited a firestorm of political debate about the criminal justice system. A Change.org petition calling on Gov. Scott Walker and President Obama to pardon Avery had received nearly 500,000 signatures by the start of this week, and that number continues to climb daily. [pullquote]Making a Murder further proves what the Black Lives Matter movement has been saying so loudly since the killing of Mike Brown and Eric Garner: The system is fixed in favor of police and prosecutors.[/pullquote]

I don’t want to spoil the series for people who haven’t seen it yet, and I can’t possibly go over all the details. Instead, I want to draw out a few points about what Making a Murder reveals about the nature of criminal justice system—and make a case that the series’s resonance with a mass audience shows the opportunity for opponents of the criminal justice system to expand their efforts, particularly in building cross-racial coalitions between families who have had their lives torn apart by the so-called “justice” system.

THE FIRST episodes take viewers through Avery’s first conviction and incarceration for a rape he never committed, and demonstrates with hard, irrefutable facts how the Manitowoc County Sheriff’s Department and prosecutor railroaded him, even in the face of evidence proving his innocence.

The rest of the series is spent taking us inside the trial of Avery and Brendan Dassey, Avery’s 16-year-old, intellectually disabled cousin, for the murder of Teresa Halbach. The episodes are filled with interviews and evidence that will make even the most apolitical viewer seriously question the legitimacy of the justice system. [pullquote]If Steven Avery had grown up on the right side of town, protected by wealth and privilege, it’s unlikely he would have ever been targeted by police in the first place.[/pullquote]

The first thing that stands out in Making A Murderer is how much the system is built to secure convictions and is stacked against defendants, especially when they’re poor. Rather than “seeking out justice,” prosecutors were more concerned with finding a culprit and securing a conviction, in spite of evidence that cast doubt on their case.

Had Avery been rich and able to hire a team of lawyers to defend him, it’s highly unlikely he would have spent a day behind bars. Most public defenders, on the other hand, despite their best efforts and intentions, are overloaded with hundreds of clients and lacking resources. A recent study, for example showed that public defenders in New Orleans were only able to spend seven minutes with their clients on average.

If Steven Avery had grown up on the right side of town, protected by wealth and privilege, it’s unlikely he would have ever been targeted by police in the first place.

One of the most disturbing parts of the criminal justice system revealed in Making A Murderer is the absence of any meaningful independent oversight over police and prosecutors—and the unchecked power they hold.

Never at any point was law enforcement or prosecutors held accountable—from the Manitowoc County Sheriff’s Department cover-up of evidence proving Avery’s innocence in his first conviction, to the illegal and unconstitutional interrogation of Brendan Dassey carried out by special prosecutors—by far one of the most difficult and enraging parts of the series to watch.

It’s telling that it was Avery and his lawyers, not the legal system, who filed a lawsuit in 2003 against the sheriff’s department for cover-up and false imprisonment. Making a Murder further proves what the Black Lives Matter movement has been saying so loudly since the killing of Mike Brown and Eric Garner: The system is fixed in favor of police and prosecutors. [pullquote]Rather than digging for the truth, asking tough questions and sticking to the idea that defendants are “innocent until proven guilty,” the media sensationalized Avery’s case and convinced the public that he was guilty long before any verdict had been reached–making it next to impossible for him to receive a fair and impartial trial.[/pullquote]

Making a Murderer takes the media to task as well, documenting how the corporate news establishment uncritically spoon-feeds audiences every word out of prosecutors’ mouths. Rather than digging for the truth, asking tough questions and sticking to the idea that defendants are “innocent until proven guilty,” the media sensationalized Avery’s case and convinced the public that he was guilty long before any verdict had been reached–making it next to impossible for him to receive a fair and impartial trial.

WITH THE explosion of the Black Lives Matter movement this past year and the effect it has had in changing people’s ideas about racism and the criminal justice system, Making a Murderer couldn’t have come out at a more appropriate time.

African Americans make up 39 percent of the U.S. prison population, making them the largest of the overrepresented racial groups in the prison system. Although whites aren’t incarcerated at the same disproportionate rate as African Americans, they make up 33 percent of a prison population that is larger than any other country in the world. That’s roughly 600,000 people, and almost all are poor and working class.

Steven Avery is white, but watching Making a Murderer, I couldn’t help but think about these statistics. I couldn’t help but think about all the other Steven Averys, the similarities between them and the many thousands of Black and Brown victims of the system, who, along with their families, have had their lives destroyed by the justice system–and the potential for building cross-racial alliances between working-class and poor people around this issue.

Hopefully, activists can take advantage of the openings created by the show’s popularity and leverage it to expand and strengthen the movement.

If you’re looking for an upbeat show, Making a Murderer doesn’t fit the bill. But even in a story filled with so much injustice, Making a Murderer gives us some glimpses of hope. The dedication of Steven Avery’s parents; his defense attorneys Jerry Buting and Dean Strang; and Brendan Dassey’s mother to keep fighting for the two men’s freedom, even against seemingly insurmountable odds, is deeply moving.

It’s stories like these that remind me why I’m a socialist and give me hope that a different world is possible: because they show the best side of humanity and the capacity that ordinary, everyday people have to stand in solidarity with one another and fight for a better world, even in the face of such a cruel and vicious system.

If you haven’t watched Making a Murderer yet, clear out your next day off and get ready to binge-watch one of the best documentary series you’ve ever seen.

*This story was originally published by SocialistWorker.org.