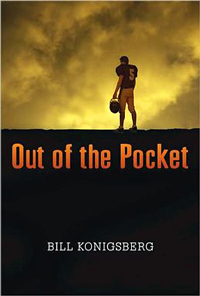 The days are still cold, darkness too long, and hot, hearty stews and soups remain dinner staples. Here are some suggestions to get you through the winter blahs to the first, glorious spring day.

“Out of the Pocket” by Bill Konigsberg, Dutton Books publisher, is a fast moving story about a gay high school football player in Southern California. Konigsberg, an Associated Press sports writer, tells a sometimes sappy tale about a tough, resilient young man outed in a very public way.

There’s a shower scene with Bobby Framingham, the gay quarterback, where teammates deal with the awkwardness of being naked in front of him. One announces, “I’m … an openly … Vietnamese kicker.” Others then join in with “I’m openly black?” “I’m openly French-Canadian!” “I’m openly Chinese.” After Dad learns of his son’s homosexuality through the media, mushy-gushy, sentimental Dad tells Bobby he’s brave and adds, “You’re the best son I could have ever asked for. I love you, Bobby.” Pass the Mylanta.

Bobby asks, as he runs onto the field before a game, “What does the gay quarterback of the football team do to acknowledge a crowd? A wave? The Wave? A Queen Elizabeth Wave?” I had no clue what “a wave” or “The Wave” meant. Thanks to American media’s infatuation for Elizabeth Windsor, I have seen the silly royal wave.

Despite not knowing about sports jargon, this was an enjoyable read. If you’re looking for escape, then you may especially want to add it to your reading list. The book might be a good gift for a teen struggling with bigoted social constructs, so long as he or she has the maturity to understand life doesn’t always come with positive outcomes.

“Through the Door of Life – A Jewish Journey Between Genders” by Joy Ladin, University of Wisconsin Press

publisher, is the autobiographical sojourn of Jay’s transition to Joy. Joy, the first openly transgender employee of an Orthodox Jewish university, transforms from death as a man to the fullness of life as a woman. It’s raw, powerful and poignant. She writes of feeling like a stranger in her own body, as a man, making it “hard to feel alive … to feel the visceral determination to exist that makes human beings, no matter how miserable, fight so hard to live.”

Joy shares snapshots of her life over a five year period from 2005-2010. She opens with a Hebrew prayer, “Blessed are You, O Lord our God, who has kept us, preserved us, and brought us to this time.” It’s offered every morning before she takes medications to counter the “ravages” from testosterone. Thanks, “to my medication,” she writes, “those effects are diminishing. For the first time in my life, when I look in the mirror, I see someone who has begun to resemble – me.”

Joy shares exchanges with her family including parents and children. In one incident, Joy writes about her young daughter. Why does Daddy look like a girl? Joy’s response: “most boys have boy brains and most girls have girl brains, but some people, like me, have girl brains in boy bodies or boy brains in girl bodies. It got too hard for me to have a girl brain in a boy body, so now I look like a girl.” Joy not only shows spiritual strength, but also an uncomplicated wisdom.

Happy reading and enjoy the rest of winter.

*Paul is an attorney and seminary trained priest. He writes the “Faith, Family, and God” column for TRT. He is Founder of www.CorporateChaplaincy.biz.