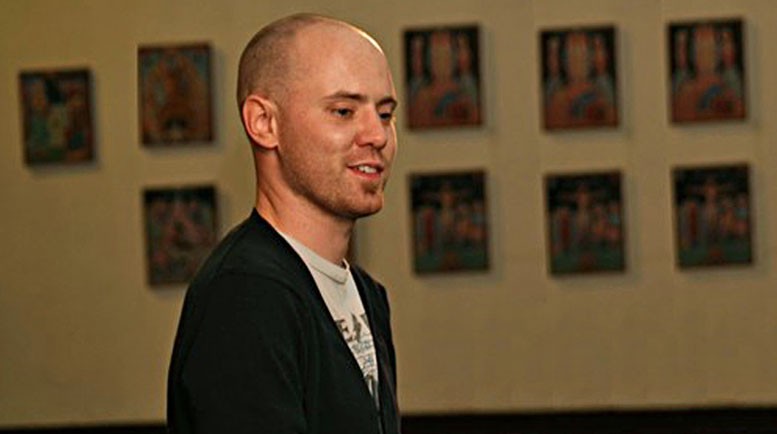 When the Boston Gay Men’s Chorus (BGMC) presents Circle of Life on March 19 and 20, the Austin, Texas-based composer Joshua Shank’s capable of anything will be a centerpiece of the performance. In four movements—peace, joy, justice, and tomorrow—Shank crafted an emotional travelogue of BGMC’s groundbreaking 2015 Middle East tour, where they experienced the region in all its beauty and complexity, from the buoyancy of the Dead Sea and singing to overflow crowds in Israel to facing a cancelled performance in Istanbul and anti-gay violence at the city’s LGBT Pride festivities.

Amidst all this, BGMC celebrated the joyous news from back home that the U.S. Supreme Court had ruled in favor of same-sex marriage. You’ll laugh, you’ll cry, and you’ll identify. Is there a better way to usher in spring, the season of rebirth, than with BGMC’s joyous celebration of facing everything life throws our way? We think not. Until then, read on to learn how Shank, who accompanied BGMC to the Middle East and interviewed members individually throughout the trip, conceived and created capable of anything.

Q: Capable of anything sounds like an amazing piece. Can you give us some context for the themes it addresses?

Q: I know you actually composed the first movement, “peace,” before the tour, based on interviews with chorus members about when they felt most at peace, and it received an overwhelming response from audiences when you were on tour in Israel and Turkey. So let’s dig in to the second movement, “Joy.” What tour experiences led to the creation of that movement?

A: It’s based on an interaction I had with a member of the Chorus. The thing that I discovered on the tour is that when the guys found out why I was there and why I was interviewing them, they kept coming to me to talk about things and that’s how I learned a lot about them. One of the members came to me and said, “I had an observation today when we were swimming in the Dead Sea. Everybody there is so different, but everybody floats in the Dead Sea, no matter who they are.”

And that’s essentially the gist of that movement—you’re at this iconic ancient place in a highly contested region of the world, and people from all walks of life are there and they’re all buoyed by the salt water in the same way. I remember seeing a Russian guy with his little son and there were people talking in a plethora of languages, every body type imaginable, every color of skin imaginable, men, women, and everything in between, and this member of the chorus who came to talk with me was like, “Everybody floats in the Dead Sea.” And it just became this beautiful metaphor for universality.

Q: That is indeed a beautiful metaphor. Now you’ve got us curious about the stories behind the other movements. We don’t want to spoil all the surprises for the audience, but at least tell us about “tomorrow.”

A: Well, I knew this composition had to end upbeat and big. I had two slow movements, peace and joy and I wanted to end with something that was fun—I wanted it to be a pop song. The lyrics to that movement were written with my husband Robert, actually. We have a cafe right down the street from our house and we would just go there and grab a drink and sit and write lyrics. We were trying to think of a real positive message, something which wasn’t just an end of a story or beginning of a new story, but the middle of one.

Q: And what did you come up with?

A: The Boston Gay Men’s Chorus is one link in a huge community. One of the things that affected me incredibly deeply as a gay man was that spate of suicides in the fall of 2010 where kids who were gay or perceived to be gay were just killing themselves seemingly one after the other. These beautiful children, they had been hit over the head by society, their peers, their parents, their churches with the message that they were somehow wrong. I saw the fourth movement as my chance to write a musical version of It Gets Better.

A: So it’s going to be called “tomorrow” and, as a fourth movement of a symphony, it needed to sum up what came before it. It needed to remind you of the journey that you’ve gone on so each verse is a call back to the previous three movements. Are you capable of peace? Are you capable of joy? Are you capable of justice? Then I had to find a good chorus, that one concept that calls back to the whole title of the piece, “capable of anything.” And I wanted it to be this really fun pop song that summed up the previous other three movements and had a message the guys could use when they do outreach concerts for LGBT kids. And it needed to be something that pointed to the future. All of these concepts that we’re told we “can’t” have—being a peace with ourselves, experiencing joy in our lives, being worthy of justice—we’re actually completely capable of having them. You just have to look to tomorrow, start the process of seeking them out and then, before you know it, you’ve got them.

Q: As I said at the beginning, this sounds like an amazing piece of music, and we appreciate getting all of the details. Is there anything else you want to throw in that we haven’t discussed?

A: Just my unbelievable gratitude. I still don’t understand how this all happened. I mean, it’s just crazy. I never thought I’d visit that part of the world. I tell my students I’ve been all around the world and most of those places outside of my own country that I’ve been to, I would say 90 percent of my international travel has been because I’m a musician. Music has taken me so many places I never thought I would go. I know that’s a cliché, but it’s totally true.

*The Boston Gay Men’s Chorus presents Circle of Life on Saturday, March 19 at 8 p.m. and Sunday, March 20 at 3 p.m. at New England Conservatory’s Jordan Hall. Tickets start at $20 (before ticket fees, $5 additional walk-up) and are available online at www.bgmc.org or by calling 617-542-SING (7464). Videos of Joshua Shank talking about his composition and its four movements are available here.