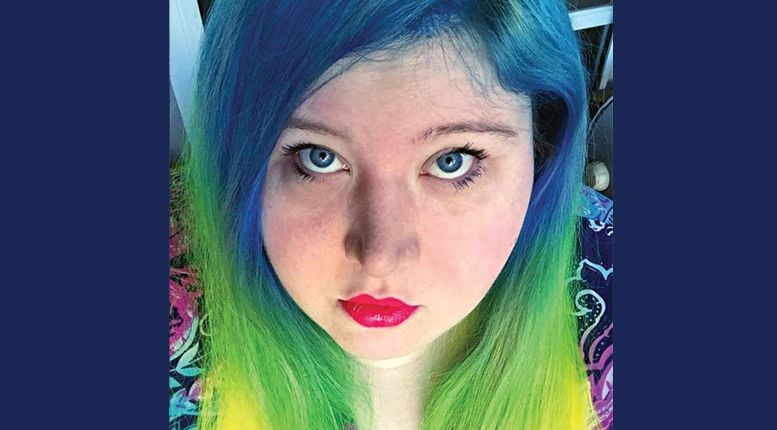 In the first of a two-part series, The Rainbow Times speaks with bisexual people about their identities and explores the “B” in LGBTQ.

Julia Mahoney grew up in a conservative Catholic household with a mother who did her best to shield her from “nontraditional lifestyles.” She spent most of her youth being protected from messages and conversations around LGBTQ people and their identities.

When she was 13, she made the decision to come out as lesbian, a move that was accepted by her parents at the time.

“Then, as I showed interest in boys again, they thought they were in the clear and my queerness was a phase,” she said.

Mahoney knew it wasn’t a phase, but a key part of her sexual identity.

“My first introduction into anything LGBT-wise was my freshman year in high school when someone told me about the [Gay-Straight Alliance] group,” she remembered. “That’s where I found out what gay and lesbian was, bisexuality was still sort of taboo even in the GSA community back then—it sometimes can be still.

“I just thought that because I liked women that I had to be a lesbian. I still liked boys at that time, too, but I was more drawn to women at that point. As I got older I realized, of course, that I was not a lesbian and that there was the middle ground in bisexuality.”

Bisexuality has been defined as an attraction to both men and women or people of various gender identities. According to the Movement Advancement Project (MAP), bisexuals compose more than half (52 percent) of the nine million Americans who identify as either lesbian, gay, or bisexual.

MAP studies have documented myriad forms of discrimination and stigma that face bi-identified people. Compared to their lesbian and gay peers, bisexuals face more instances of violence and are three times more likely to be treated violently by the police when reporting crimes.

“I … plan to never come out in my professional life … because I wouldn’t want to add another layer of discrimination on top of the racism, sexism, and ableism I already face in the workplace,” said Priyanka, a bisexual woman who asked that The Rainbow Times not use her real name.

“I am closeted to everyone in my family except for my parents, sister, and cousin,” she said. They are all accepting, however, I couldn’t gauge initial reactions because I was outed to them several months before I personally came out to any one of them.

“Although my parents are supportive, they fear that our larger family would be hostile towards a same-sex wedding or relationship, and so imply I should remain closeted to our larger family.”

A concern among many bisexual activists is the erasure of bisexual identities and experiences within the larger LGBTQ community and mainstream society.

“We have heard from countless community members about times they have had their bi+ (plus) identity passed over or invalidated, and this can be on a macro or micro level,” said Kate Estrop, president of the board of directors of the Bisexual Resource Center in Boston (BRC). Estrop defines Bi+ (plus) as, “an umbrella term used to describe someone who is attracted to more than one gender. Anyone who identifies as bisexual, pansexual, queer, and fluid, for example, is included under the bi+ (plus) umbrella.”

The BRC has been in existence since the mid-1980s and serves as a national and international resource on bisexual culture and identities. The BRC authors reports and books, makes presentations, offers support groups, and serves as a convener for bisexual people locally, nationally, and internationally. BRC also co-authored a report with MAP called, “Understanding Issues Facing Bisexual Americans.”

Estrop said that it’s not uncommon to see intentional omissions of bisexual people from discussions around sexual orientation.

“A news reporter might report on Pride events and say ‘gay and lesbian,’ or even, ‘gay, lesbian, and transgender,’ even in the same article or report that also used ‘LGBT’,” she said. “On a more micro level, a woman might be monogamously dating a man and be perceived as straight, even if she identifies herself as bi+ (plus) … even more troubling, a person who was previously dating someone of the same gender may be ‘kicked out’ or unwelcome at queer events if they start dating someone of a different gender.”

Gabrielle Blonder, who coordinates the support groups for the BRC, echoed Estrop’s observation.

“I’ve witnessed erasure in both pop culture and the lives of me and my friends,” she said. “Bisexual characters are so rare in TV and movies, and often they’re either villains, ‘don’t like labels,’ or their bisexuality is played off as a joke.”

Blonder also said that she’s been asked if her bisexuality is a phase and even told that her orientation “doesn’t matter” when she’s dating men, even if the man she’s dating is also bisexual.

Even the terms “gay and lesbian” or “gay rights” or “gay marriage” have devastating effects for bisexual people, Blonder continued.

“It may seem like a small turn of phrase, but for someone who feels isolated or alone because of their sexual identity, it can exacerbate those feelings even further,” she said.

Battles of the Sexes

Priyanka said that notions around masculinity and acceptable heteronormative behaviors contribute to a stark contrast between the acceptance of bisexual men and women.

“I think the stigma against bi men is more explicit because our society considers male sexuality more powerful, and thus more important, than female sexuality,” she said. “Accordingly, any deviations from the sexual norm, [like] not being straight, are seen as more threatening in males and thus, bisexual men are more openly stigmatized than their female counterparts.

“Female sexuality, on the other hand, is still largely viewed as less powerful and as something that only exists [for] a man to be attracted to … Thus, society belittles female bisexuality as unimportant, weak in strength, or only existing for the satisfaction of men.”

Michael Monroe, an openly bisexual male and a member of the BRC board, agreed.

“As a guy it can be a unique feeling because female-presenting bisexuals are fetishized, and therefore at least acknowledged, but bi men are either lampooned, ridiculed, or just plain omitted as a reasonable possibility in terms of existing,” he said.

Monroe likened his bisexuality to a “revolving door” as he is always having to come out to people who often don’t believe him.

“Not being well understood by straight or gay people, it’s hard to feel respected or legitimate by the world at large—and that includes gays and lesbians,” he said.

Monroe contends that he often struggles with ostracization by men who don’t understand him.

“For some insecure straight men who’ve barely even reflected on their latent homophobia, to say nothing of biphobia, bi+ (plus) individuals are just a total short circuit. Here’s a man—one they might work or socialize with—and he might ‘do gay stuff’ but this ‘dangerously promiscuous’ individual is probably also going to ‘steal’ his girlfriend.

Or maybe it’s because a man being bisexual calls into question a nice comfortable gender and sexuality binary, whereas women’s bisexuality can be comfortably integrated into their fantasy life as ‘hot’ because it’s obviously always about the potential for threesomes … ”

Caleb Burley, another bisexual man, summed up his thoughts on why the double-standard exists with one word.

Having been raised in a Christian household, Burley said that the coming out process required counseling. Even after coming to terms with his orientation, he said that he still experiences trauma around his identity.

“My ex-girlfriend sent me a bunch of pictures of guys when I told her and told me that she now had a guy to talk about cute boys with,” he said. “We were dating at the time she did that. The relationship grew to be more about how I liked both men and women than how I felt about her, which led to a lot of anxiety over being open about it.”

Burley said that coming out as bisexual tends to force others who are misinformed to try to fix him.

“I have been told that, ‘I can’t make up my goddamn mind’ several times in my life, and that I should pick one or the other instead of both,” he said. “It definitely has caused some depression throughout the years having to deal with the fact that people try to tell you that your sexuality is not valid.”

Monroe said that his experiences with the gay community in particular have led to conflict.

“Many bi+ (plus) men face a veritable onslaught of fetishization by gay men,” he said. “It’s either aggressive, or there’s something just a little ‘off’ about it. It shows up on dating sites with solicitations for sex, one-line crass greetings, [or] backhanded compliments about our virility … ”

Monroe said that interest from gay men can often dehumanize bisexual men and have a tendency to be verbally aggressive based on the stereotype that bi men are hypersexual. When rebuffing gay men, Monroe compared their reactions to their heterosexual peers.

“And if we try to bring it up, it’s like a direct analog to that straight guy who, when confronted with something that made a woman uncomfortable, retorts with, ‘What, is it suddenly wrong for a guy to compliment a girl these days? Geez’!”

Monroe said that these men simply aren’t self-aware enough to acknowledge that their behavior is unwarranted and offensive.

But what role do other identities like race and gender play in the overall treatment and perception of bisexual people?

In the September issue, The Rainbow Times will explore how bisexuality can intersect with other identities and debunk the top myths, misconceptions, and misinformation surrounding bisexual people.

2 Comments on "Breaking Down Bisexuality: Understanding the Most Prevalent Sexual Identity Under the LGBTQ+ Umbrella (Part 1)"