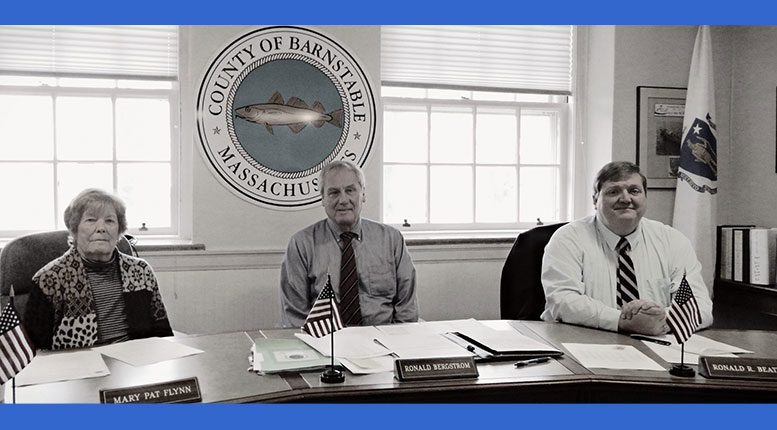 Ron Beaty (Right). All commissioners are elected at large on a partisan basis for four-year. Beaty made anti-LGBTQ comments via Twitter last month; Photo: barnstablecounty.org

CAPE COD—A Barnstable County Commissioner’s recent post about gay politicians sparked indignation and condemnation from nearby politicians, even all the way to Beacon Hill, according to reports. As a result, a call for his resignation ensued immediately after the social media post.

“I’m calling for Commissioner [Ron] Beaty to resign, I’m that upset,” said state Rep. Timothy Whelan, R-Brewster, to CapeCod.com. “I don’t even know what else to say.”

Beaty’s Twitter post/poll asked people to weigh in on gay politicians’ ability to represent every constituent equally. As of March 10, the post in question has been “discreetly” deleted by Beaty.

“Generally speaking, are gay politicians too self-absorbed and self-centered to adequately represent ALL of their constituents in a fair and equitable manner?” the Feb. 19 Tweet read.

The post, according to The Cape Cod Times, happened less than a week after a pair of openly gay state lawmakers, state Sen. Julian Cyr (D) and state Rep. Sarah Peake (D), were named to leadership positions.

Although reactions ensued, some considered not commenting on the post to avoid bringing more attention to it. In the end, silence was not an option for most and a statement signed by The Cape & Islands Delegation of Massachusetts’ state senators and representatives, comprised of a group of eight individuals, was sent to the media:

“Recognizing that Ronald Beaty engages in this boorish behavior to elicit reactions for his own amusement, we would prefer to simply ignore this latest example of his tone-deaf rhetoric and have the press and social media do the same,” read the statement signed by Senator Vinny deMacedo, Rep. Timothy Whelan, Rep. William Crocker, Jr., Rep. David T. Vieira, Rep. Randy Hunt, and Rep. Dylan Fernandes. “However, our silence could be interpreted to imply indifference and that would be a gross misinterpretation of how we feel about the situation.

“Instead, we defend our colleagues who were attacked and encourage Mr. Beaty to stop besmirching the reputation of everyone in county government, both elected and appointed, by resigning his office immediately. Enough is enough,” they stated.

“I am disappointed to hear that Ron Beaty made such an uninformed statement regarding the value LGBTQ people bring to Cape Cod and our commonwealth,” said Cyr to The Cape Cod Times. “It appears he would prefer to spend his time as an elected official causing division and spreading disrespect.”

Beaty, who spent time in federal prison for threatening to kill President George H.W. Bush, Senator Edward Kennedy, and Massachusetts State Senator Lois Pines, was elected to office in 2016. He has made it his own “style” to attack others via social media. In the past, as reported by Cape Cod Wave Magazine, Beaty took to Twitter to “attack [Gov. Charlie] Baker, calling him a ‘Wimp,’ ‘Snowflake,’ and other names.”

According to The Hill, Beaty cited “President Trump’s social media practices to defend the tweet.”

In a statement sent to The Rainbow Times, Beaty stated he was not stepping down from his position, nor was he apologizing about what he said either.

“Regarding the ongoing political harassment by others to shut me up by trying to force me to resign, I just want to say that if my Freedom of Speech Rights are successfully silenced by others, then your First Amendment Rights are next!” read the statement. “Once again, no, I will not apologize for anything, and certainly will not resign.”

Beaty, whose political career has survived most of his social media outbursts and scandals, lost his run for a House seat last year and some reports argue it had to do with him calling “a Parkland school shooting survivor ‘an absolute idiot.’”

“Generally speaking, straight men that are homophobic are incapable of representing ALL of their constituents in a fair and equitable manner,” read Murphy’s response, to Beaty. “Wake up, Ronny, you serve in the most liberal state in the union. Maybe there is a spot for you in the Trump administration.”

Just asking (and not for a friend):
"Generally speaking, are convicted felon politicians too self-absorbed and self-centered to adequately represent ALL of their constituents in a fair and equitable manner?"

And even more expressed dismay via Facebook, where Beaty’s comments continue to receive condemnation from many.

“Barnstable County Commissioner Ron Beaty’s hateful comments have no place in public discourse and are a disservice to the open and accepting community that so many have worked so hard to create on Cape Cod,” said 9th District Mass. U.S. Representative Bill Keating via his FB page.

But, Beaty believes the voters have a louder voice.

“In 2016, the voters elected me into office as one of their County Commissioners, and in November 2020, it will again be the voters who decide if I should stay or go,” his statement read.

Last week, according to The Cape Cod Times, the largest crowd to attend a Barnstable County Board of Regional Commissioners took place to protest Beaty’s posts regarding gay politicians, “but the man they came to see was conspicuously absent.”

A MoveOn.org petition has started online to ask for Beaty’s resignation.

“Ron Beaty is not fit to serve as a County Commissioner and it’s time for Ron Beaty to resign or be removed from office,” read the petition’s intro. “Homophobic and bigoted rhetoric has no place in Massachusetts and elected officials should represent constituents not ridicule them. Barnstable County Commissioner Ron Beaty has perpetuated bigoted views against the LGBTQIA+ community and he should step down from public office.”