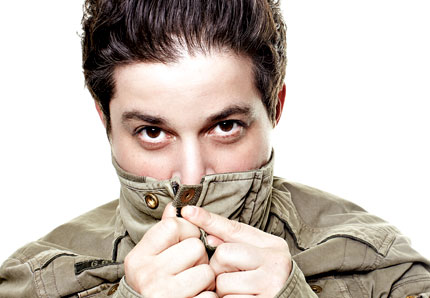 Known for producing many lesbian and LGBTQ-focused nightlife events throughout New England, Dyke Night Productions will host the show in conjunction with a Coyote Ugly-themed Tea Dance featuring DJ Jodi at Main Street in Ogunquit.

“Dyke Night started One Night StandUp two years ago to provide an alternative to the dance parties we host bimonthly,” said Kristen Porter, founder of Dyke Night Productions and owner of The List: Boston’s Queer Agenda. “One Night StandUp events showcase the best in LGBT comedy while offering an earlier event time and seated entertainment.”

Goldman has filmed three TV comedy specials shown on LOGO, Showtime and Comedy Central. She has appeared on  Bones, RuPaul’s Drag U and Happy Endings. Goldman and her creative partner, Brandy Howard, can currently be seen on Bravo’s new show, The People’s Couch. They also star in the web series In Your Box Office and on their new shows with Tello Films, Gay Street Therapy and Roomies. Julie has been on the Gay Pimpin with Jonny McGovern podcast, and her albums The Awkward Studio Sessions and Co-Dependent Obsessive Love Ain’t So Bad (So Leave the Window Open)  are available on iTunes.

TRT asked Goldman to share her thoughts on starting out in the comedy scene in Boston and her own experiences as a Jewish lesbian in the business.

Q: Why did you decide to become a comedian? Was that always your goal?

A: I became a comedian to simply be a comedian. I had no idea that it would entail a lifetime of struggle and sexism, and gross clubs, and shi**y competitive people, and power mongering producers, and agents and the daily repetitive and relentless rejection. With that said, it’s super fun. I started comedy at 15, so I knew nothing. I was obsessed with comedians like Mel Brooks, Gilda Radner, Joan Rivers and Eddie Murphy. I just wanted to be a part of whatever it was they were a part of.

Q: What do you love most about doing comedy?

A: I love the freedom, being in control of my own self and saying exactly what I want, no matter the consequence.

Q: What do you particularly enjoy about each of the different types of comedy you do?

A: Each provides a different area of expression and creativity and having fun! I like working with other people, so doing the web series or podcast or TV shows is an opportunity to laugh and learn from other people. Standup is very solitary and though I love it, working in collaboration with others fosters a healthier social lifestyle.

Q: Who have been your biggest comedic influences and why?

A: Mel Brooks. Mel Brooks. Mel Brooks.  I was obsessed with his movies.  I would reenact them all over the house growing up.  “Sire, Sire, the peasants are revolting.” “You said it, they stink on ice…” His movies were silly, funny, and almost like ridiculous cartoons, and so Jewish.  I couldn’t get enough. After him, I would say Joan Rivers, who to me, growing up, was a woman with a big voice, persona and opinion. Then Eddie Murphy was so funny, and he also had a sexuality and sexiness in his voices, and again, irreverent and subversive and rattling the cage and pushing the envelope. When I look at comedy, that’s what I want to see and feel.

Q: What was it like specifically coming up through the comedy scene in Boston?

A: I came out in my standup when I was 19, and honestly I think more than anything that’s what probably was the hardest. Boston was great, horrible, hard, fun, cool, and at the time I was coming up in the 90s, the comedy scene was really popping. I remember doing a comedy contest with Dane Cook. He killed it. I, however, had just done mushrooms all day with my friends and tanked. It still haunts me.

Q: Do you find the Boston-New England comedy scene to be unique in any particular way?

A: I don’t know what it is about Boston. I went to Emerson College and there were four comedy-sketch groups. What other city has that? None. Perhaps [it’s] because it’s the seat of the revolution, and Bostonians come from struggle, so their sense of humor and fun and passion is like in the blood? I don’t really know why Boston was and is such a hot bed of comedy, but it is.

Q: Were you out as a lesbian as you began doing standup in Boston? How has your identity—lesbian, Jewish—affected your experience?

A: Whatever you identify as and whatever you express strongly even in the way you look will affect, for good or bad, your experience in this business. I look like a masculeeeen woman and talk about lesbian stuff. That absolutely has kept me in a certain niche. Comedy is a white and black boys club that in order to enter and find the key and figure out your place in is to me the mystery of the universe next to where the god damn arc of the covenant is buried.

Q: Do you feel like there are certain jokes that you can get away with that other comics can’t? What’s off limits for everyone?

Q: Do you feel that as a comedian you have an opportunity to also educate audiences or break down stereotypes? Do you actively try to do this?

A: I think most comedians are kind of like teachers, in whatever way you learn from them is what you learn. I do think comedy is the one place you can tell your truth, and the truth, even if it’s cased in comedy or silliness or whatever, is something we can all be taught. I think part of what a comedian does inherently is, hopefully, break down stereotypes and try and give people something new or something they haven’t thought of before. I do hope I break down some stereotypes and honestly I hope I can enhance some too.

Q: Why is it important for women and LGBTQ people to have comedy events and groups dedicated to them, like the show you founded, Offensive Women?

A: Offensive Women was a f*ck you in a way to comedy because the whole point of the show was we are offensive because we are alive. I was tired of the double standard, and women being treated like such pieces of sh*t in general, in comedy, in the world, and thought it was going to be the kind of thing that would soar as everyone—men and women—would enjoy the show and we would prove that funny is funny, even with a point, even if it is all women. However, the sad truth is that it didn’t. It was heartbreaking really. We had a good run for two years and had two huge blowout shows but then it kind of just died. I see what Jenny McCarthy is doing—sexy women doing comedy—and there’s that liberal lady doing her show. I’m not putting the words “pretty” or “sexy” in my comedy shows, and if you look at all women shows doing well, that’s what they have going for them. It bums me out really.

Q: Even as women and LGBTQ people are making much progress in the comedy world, what challenges remain?

A: That we are still women.

Q: What advice would you give to LGBTQ people, particularly lesbians, who are starting out as standup comics?

Q: What current and future projects are you working on?

A: I’m working with my writing partner Brandy Howard on trying to get a sitcom made that has a butch lesbian as a principal comedy role, like a likeable, funny, butch, lez character and a straight character who isn’t obsessed with “getting guys,” kind of like Absolutely Fabulous meets Ja’mie: Private School Girl. That’s the main thing we’re doing, and then I am just hustling on and traveling and hopefully coming to a town near you.

Tickets for the August 9 show are $25 for VIP preferred seating, $20 for general admission, and both prices include the Tea Dance. To purchase tickets, visit www.djjodi.com/buy-tickets. For more information on other upcoming events through Dyke Night Productions, visit www.dykenight.com, follow them on Twitter @DykeNight and on Facebook.

TRT edited some of the content to make it age appropriate for all readers.