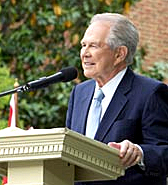 Congratulations, Pat Robertson, for being chosen as Creep of the Week. There were a lot of outstanding candidates this week, but I chose you. Why? Alas, it’s not because you’re special. In truth, it’s because I’m tired. I’ve been reading about racism and homophobia and terrible horrible things all day and your doughy, lemon-shaped head managed to swirl into my field of vision as my deadline was approaching.

Or maybe it’s because I thought of you yesterday while I was at the grocery store, walking down an aisle that had all manner of boxed macaroni and cheese and recalled your confusion over this American food staple on a recent episode of The 700 Club when you asked if mac and cheese was “a black thing.” I imagined you standing there, amazed, especially as you watched white people throwing that s#&t into their carts.

So I guess you could say, Pat, that you’ve been on my mind.

What did you do, you ask? As you know, the list is long. But this time I’m taking issue with your equating homosexuality with demonic possession on your March 26 episode of The 700 Club.

It was during a segment featuring Shawn Derritt, a Christian recording artist and self-proclaimed “ex gay.”

Here’s how you introduced the segment: “It didn’t matter who he did it with! Because Shawn Derritt wanted it that badly. He was hungry for it. So for seven years, Sean trolled the streets longing for cheap sex with other men. All the while Sean’s wife was at home and completely clueless.”

Woah. First of all, I would pay good money to un-hear and un-see you talking dirty to me. Secondly, it sounds like you are describing a terrible and sad situation where nobody is happy, and everybody is going to get hurt. I mean, obviously Derritt and his wife aren’t exactly compatible since he’s, well, gay and she’s, well, “clueless.” And even if she weren’t clueless, finding out about Derritt’s escapades would certainly be a deal breaker. (Am I right ladies?)

Unless, of course, we can just remove the part of this equation keeping it from fitting The 700 Club’s narrow parameters for acceptable human existence. That’s, of course, the gay part.

And so Derritt prays the gay away. And everything is wonderful and he’s totally straight now. For Jesus.

Against all odds, am I right Pat?

Here’s what you said: “You know the world today says, ‘Ok Sean, so you are gay, you want to go out and have affairs with men, that’s cool. You have an absolute right to do that, why not? So you’re married, well that’s too bad. So your wife doesn’t like it, well tough.’”

Took the words right out of the world today’s mouth. Definitely godless heathen gays encourage people to step out on their wives and husbands to engage in clandestine affairs with same-sex partners. #1 item on the Homosexual Agenda, in fact.

But Pat, this sexy-time moral free for all is not cool to you, it turns out.

“That’s not the right attitude, the attitude is that this is sin, it’s wrong. And Sean realized it was wrong but he couldn’t control it,” you said. “And it’s time in society we say certain things are wrong. However you look at it the man is married and he’s got a child and he’s out having multiple affairs with men. He’s picking them up on the streets. So he’s obsessed, he has a compulsion. I would think it is somehow related to demonic possession.”

You would think so, eh Pat? Yeah. I guess you would. Crazy talk is one of your specialties. I hope that Mr. Derritt and his family make it through this s&*t storm okay. But righteous moral judgment isn’t exactly the same thing as sound advice.