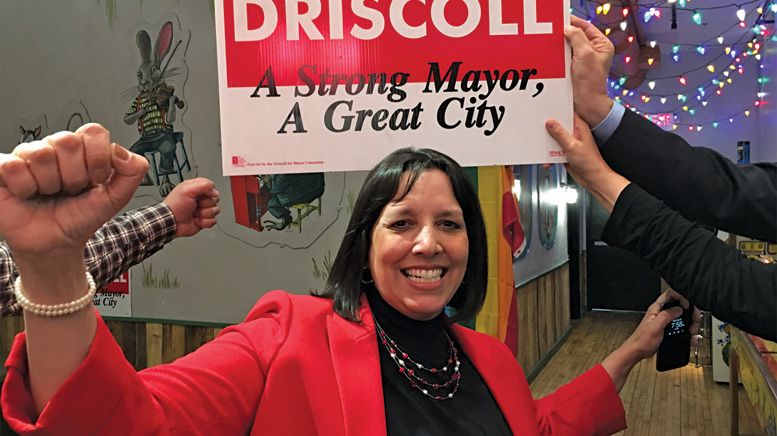 By the Editorial Board—

Since taking office more than a decade ago, Salem Mayor Kim Driscoll has proven herself to be a tried and tested LGBTQ champ, as touted in the August 2016 edition of The Rainbow Times (TRT). Fast forward to its October 2017 edition where TRT highlighted both mayoral candidates and their stances on everything Salem. As an LGBTQ publication committed to social justice values and initiatives across all intersectionalities, it became crystal clear who has the best interest of all Salem residents in mind.

Driscoll’s fearless leadership skills have lead the city to not only embrace diversity, but also to ensure inclusion of all of its residents—those belonging to the mainstream LGBTQ community and the subcultures within and outside of it. Under Driscoll’s administration, Salem has consistently earned a 100 percent ranking, according to the Human Right’s Campaign Municipal Equality Index for LGBTQ-inclusive polices and practices. At her helm, the city also developed a non-discrimination ordinance that fully protects the LGBTQ community. It was also under her management that North Shore Pride was established. Salem also hosts the annual LGBTQ Pride Flag Raising Ceremony in recognition of LGBTQ Pride Month each June.

With Driscoll’s direction, the municipality created its own No Place for Hate Committee (NPFH), which is dedicated to promoting acceptance of diversity and combating discrimination. Driscoll also appointed the first LGBTQ Community Liaisons in the Mayor’s office and Salem Police Department.

But Driscoll’s commitment to the LGBTQ community goes far beyond policy and the corner office. She is an ally, a staunch one at that.

Driscoll is in support of the statewide public service accommodations bill to protect the transgender community in public spaces and co-chaired the Freedom Massachusetts’ “Mayors for Freedom” Coalition. She has thrown her support behind the North Shore Elder Services’ “Over the Rainbow Coalition” for LGBTQ seniors for years and stands with North Shore Alliance of LGBTQ Youth (nAGLY).

“Mayor Driscoll quite literally put her money where her mouth is when it comes to defending the LGBT youth community on the North Shore,” stated nAGLY Executive Director Steve Harrington at an event where they honored Driscoll.

In the history of Salem, Driscoll is the first Mayor to include World AIDS Day and the Transgender Day of Remembrance (TDoR) by mayoral proclamation.

Driscoll is a no-nonsense mayor of action. In 2014, Driscoll took on Gordon College by terminating its city contract early when the college policy included discriminatory practices directed toward the LGBTQ community, which violated the city’s non-discrimination ordinance enacted earlier that year.

“Gordon’s behavioral policies and their president’s advocacy for the ability to discriminate against LGBT individuals violated both the spirit and letter of that law. In Salem, perhaps more so than most other cities, we have an especially unique understanding of the negative outcomes that can follow from any group of people being singled out for discrimination or stigmatization. Our values are shaped by our history and it is a legacy that really impels us to stand up and take positive action,” said Driscoll to The Rainbow Times in a former exclusive interview.

“Mayor Driscoll quite literally put her money where her mouth is when it comes to defending the LGBT youth community on the North Shore,” said Harrington, referring to the incident, which placed Driscoll on the map nationally. Driscoll used the opposition to her human rights approach with Gordon College and donated $5 to nAGLY for every negative phone call she received regarding her historical decision.

When The Rainbow Times’ newspaper box explosion occurred in downtown Salem in August 2016, Driscoll not only offered her support, but she was hands on in ensuring that the perpetrators were caught and that the city was made whole again. One of the first calls the publication received after the incident was a message from Driscoll, offering her unyielding support to the LGBTQ community and the publication itself. The hands on approach, amplifying her solidarity and commitment to business owners, residents and the LGBTQ community, spoke volumes about the kind of leader Driscoll was then and is now.

“Mayor Driscoll doesn’t see black or white, male or female, straight or gay, cisgender or transgender—she stands for what is right no matter what,” said Kirsten Freni, Chair of the nAGLY Board of Directors, to The Rainbow Times.

Perhaps the fiercest debate in recent months in Salem lies with the passage of the Sanctuary for Peace Ordinance, which codified the city’s policies and practices as they relate to immigrant rights and protections under the law. Incorporating and echoing the voices of those most often marginalized, Driscoll spearheaded the initiative and worked tirelessly to ensure its passage by the City Council with relentless conviction. She succeeded in doing so. Such an ordinance aids in providing public safety and protection to all the city residents. In contrast, her opponent Paul Prevey stands in strong opposition to this measure.

In a recent report published by The Rainbow Times, Driscoll explained her ardent support of the Sanctuary for Peace Ordinance, up for public vote on the November ballot as Question 1.

“I support the Sanctuary for Peace Ordinance and believe it is consistent with our community’s values and will make Salem safer, because it codifies into law our existing policy of providing city services to all residents regardless of one’s country of origin. Now, more than ever, hardworking, law abiding members of our immigrant community have expressed fear about reaching out to local officials, as a result of more active deportation efforts. It’s important that all individuals feel secure in calling the Salem Police or Fire to report a crime, fire, or medical emergency. This ordinance helps to ensure that all people know they can rely on local services without fear of deportation, regardless of their immigration status,” the Mayor explained.

Driscoll pointed out that the ordinance does not “violate federal law, jeopardize federal funding or prevent public safety officials from sharing information with other law enforcement agencies. That’s why our current Police Chief Mary Butler and former Police Chief and current State Representative Paul Tucker are both strong supporters of the Ordinance.”

Mayor Kim Driscoll has stood tall and with conviction on the right side of history time after time to protect city residents while taking a stand against discriminatory actions directed toward marginalized communities. Under her administration, Salem has been cultivated into a cultural hub of the arts, utilizing state-of-the-art technology and development while boasting a booming economy. Since Driscoll first took office, 700 new local jobs have been created and unemployment is the lowest it’s been since 2002. Due to Driscoll’s leadership, Salem has attracted some of the best talent from surrounding cities, such as Boston, largely in part to its lifestyle, inclusion and affordability. Salem is rising to the top and Mayor Kim Driscoll is the one we can count on to keep us moving forward in the right direction. In sharp contrast, Prevey lacks specific plans to address city issues and fails to rightfully acknowledge and provide details pertaining social justice causes, as reported in a former and exclusive mayoral in-depth interview with The Rainbow Times.

Especially during this tumultuous political time, Salem needs a mayor who is unafraid to dig their hands in and get dirty as it relates to human rights and local governance to keep the city moving forward on the right trajectory. In a political era where rights are at stake and “religious freedoms” are being used to discriminate and isolate LGBTQ people, women, the Jewish community, black people, immigrants, Muslims, transgender service members and anyone who isn’t represented by the majority, Salem needs a mayor with conviction and with the foresight to anticipate issues as they arise to address them without fear and with everyone in mind. Salem needs someone who articulates and advocates for human rights with candor and passion, openness and clarity of thought, even if it may not always be politically advantageous. That is what differentiates leaders from politicians. That is what we have seen come from the office of Kim Driscoll these past years and that is the sincerity that shines from that corner office in Salem’s downtown.

It is with great trust and confidence in Mayor Kim Driscoll that The Rainbow Times proudly offers its robust endorsement in the Salem mayoral race.