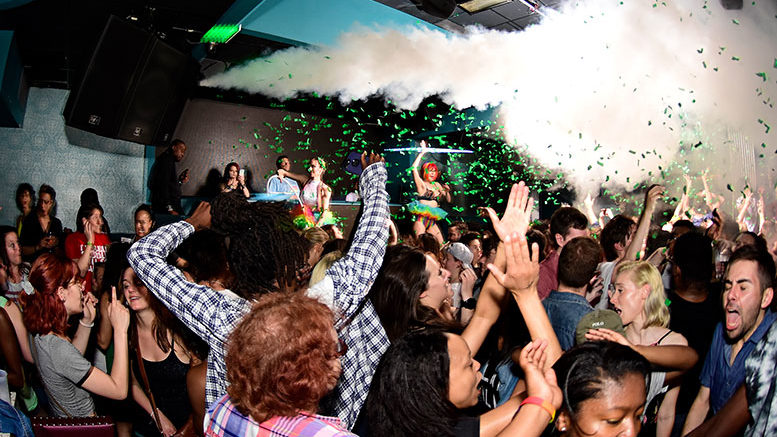 Dyke Night® closes, reactions and video from its founder below

BOSTON—After a 21-year-run, Dyke Night®’s Pride at Night events will come to a close, according to its founder, who is stepping down from the organization.

The organization was founded in 1998 as a “community spirited events production company with a mission to partner entertainment with philanthropy,” its website read.

“My background is in nonprofit executive leadership, and I embrace the notion that organizations and communities benefit when longtime leaders thoughtfully step down in order to provide space for emerging leaders to step up,” Porter explained. “As a teacher and mentor, nothing could be more fulfilling than passing the torch.”

Porter, a gerontologist and passionate philanthropist, threw herself into HIV activism in the late 80s and early 90s after many loved ones became infected with HIV and ultimately succumbed to the virus, she said.

And, Dyke Night® was born.

“We started throwing Dyke Night® Thursdays at the Midway Café so we could afford to buy supplies for our street outreach to homeless and injection drug using LGBT women via our grassroots activism [organization], Lesbian AIDS Project of MA (LAPM),” said Porter of its early years. “After LAPM disbanded, I continued that mission. During that time, I was the director of a nonprofit Boston HIV/AIDS clinic and so fundraising was a big part of my role.”

Though Dyke Night® will draw the curtain in 2019 as the community knows it, Porter explained that the closure has been a gradual process.

“Pride weekend closes out our Pride at night events, the largest of our annual events, and marks the end of traditional nightclub events,” she said. “We started the process of passing the torch when I ended our 10 year Second Saturday event and Pride weekend will wrap up that transition.”

The void that Dyke Night® filled in the community and the way it and Porter herself have impacted countless patrons, supporters and partners is palpable.

“In the beginning 11 years ago, I was not active in the lesbian community, but being involved in Dyke Night® and Kristen Porter Presents changed all that,” said Perri Mertens, Marlborough, Mass. “Kristen has been a mentor throughout all those years, and [I] can’t even begin to express how much I have learned about our community.”

“I am really looking forward to seeing everyone at LUSH at ICON for ‘Last Call,’” said Mertens about the final Pride at Night 2019 event. “It will be a bit of a reunion given how many people’s lives have been touched, all the friendships and partnerships [forged], and even marriages as a result.”

“Kristen brought me into the Dyke Night® family as a DJ and business partner after the death of the super talented DJ Kris Kono,” said Kalaghan, also a longtime resident DJ at the Boatslip Resort in Provincetown. “It was a fantastic experience working with someone so dedicated to creating quality nightlife events for the LGBTQ community.”

With the ever-changing nightlife scene, Kalaghan, a Dorchester resident with her wife of 20 years, recalled the earlier days.

“As someone who has spent 40 years in the industry, it always saddens me when a gay/lesbian club or promoter decides to throw in the towel,” she said. “It is a hard business. Things change. I get it. However, it feels like yesterday that there were more LGBTQ spaces than I could count. Now, not so much.”

A mover and a shaker, when Porter sees a need, she sets a plan into action to fill a void.

“Last year we embarked upon a new initiative, Drag Boston, aiming to address the disparities experienced by drag kings,” she said. “As drag has increased in popularity, opportunities have flourished for drag queens; kings have not seen the same boost. We created a drag king workshop (we have three more in 2019) that by the end of the year will have over 40 new King graduates. In 2020, Drag Boston will provide regular shows so that our graduates, along with other local kings, have additional performance opportunities. Once that gets established, I will pass that torch as well.”

Kalaghan reminisces of the collaboration with Porter throughout their working relationship.

“All my memories of working with Kristen are my favorite!” Kalaghan said. “Seriously, I can’t even pick one. We had a blast every single time that we worked together.”

Still, others feel appallingly saddened that it’s the end of an era in Boston’s womxn scene, a word used by Porter as an intersectional alternative spelling to be inclusive of transgender women and nonbinary people.

“Seeing Dyke Night® end makes me deeply emotional,” said Jo Trigilio, LGBTQ member and Boston Dyke March leadership team member. “I think of all the events of the past two decades, all the friends I made, the relationships I have formed … it was an avenue to community.”

And, Dyke Night®’s fundraising and distribution of funds—in addition to being a staple to many in Boston and surrounding areas—was instrumental to a “multitude” of recipient organizations carrying out programs and events that they may not have, otherwise, been able to afford. 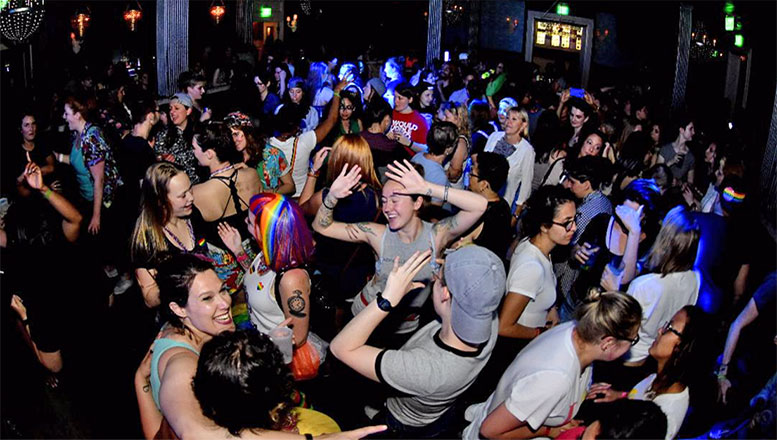 “Fundraisers hosted by Dyke Night® such as the Dyke March After Party, Valentine’s Love Machine, and countless speed dating events made the Dyke March possible,” said Triglio, who lives in Somerville. “Dyke Night was consistently our most generous donor.”

Echoing Triglio’s feelings, a male crossdresser in their 40’s and someone who regularly attended the events/parties expressed that a “safe space” and people they care for would no longer as accessible—a sense of loss for the Norton, Mass. resident.

“I was out with another cross-dressing friend. She is 6’4″ in flats, and she NEVER wore flats. I did a professional makeover that day. Feeling like a million bucks, my friend and I found information on the Midway Event,” Thomas recalled. “On a whim, looking for something to do, we showed up to the Dyke Night® event. So you have a really tall cross dresser and an overly made up crossdresser looking like members of ‘Misfit Island’ walking into the middle of a women’s event. Kristen was working at the door and we sheepishly walked in and asked if we were ‘allowed’ to attend.

“In typical Kristen fashion, she literally opened her arms and gave us a big hug and showered us with compliments, welcoming us into her events. From that night forward we were hooked on Dyke Night® events. I have attended and participated in events in nearly every venue hosted by Dyke Night® over the years. Dyke Night® events have always been inclusive and welcoming to people from all walks of life.”

In addition, Dyke Night® @ Toast, to some, is irreplaceable because of the sense of belonging it made them experience.

“Dyke Night® @ Toast will forever have a special spot in my heart,” said Triglio. ‘Those of us who were regulars formed a community. At the end of a stressful week at work, there was Toast, full of a bunch of queer people dancing and having a good time. I still miss it.”

Although Dyke Night® will be missed due to its iconic events and philanthropic efforts, Mertens, from Marlboro, also expressed support of Porter’s decision and said that Porter’s “expertise, wisdom and huge heart [are] needed for other important causes.”

And for Porter, the beauty of it all came from those who showed up, who became more than patrons to her, those she looks forward to seeing again this last time around at the 2019 LUSH Party.

“The magic of our events has always been because of our patrons, many who have been supporters for the 21 years,” Porter said. “Our ‘Last Call’ weekend of pride events with the Official Dyke March After Party and then Saturday’s LUSH Party will be special because they make the party. I look forward to celebrating this ending and all we’ve done with them.”

To stay up-to-date or to get involved with Porter’s additional ventures, check out her websites at queeragenda.org, kristenporterpresents.com, and dragboston.com.

*This story will appear in The Rainbow Times’ June/Pride 2019 issue, on June 6th – Make sure to pick up your copy for posterity!