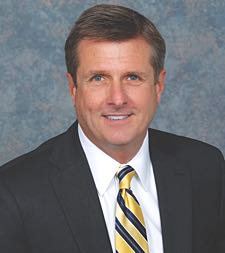 At age 16 Rick Welts became a ball boy for the National Basketball Association’s (NBA) Seattle SuperSonics, his first venture into what would become a lifetime in the world of professional sports. Since then, he has worked for a variety of NBA teams as well as the league itself. Today, he serves as the President and Chief Operating Officer of the Golden State Warriors. His main focus currently is to bring the team back to San Francisco soil for the first time since 1966, with a newly planned arena set to open its doors in 2018. Welts recently made time for an exclusive phone interview with The Rainbow Times.

Q: You’ve worked with a few different teams over the years, but you’ve also worked with the league. What are some pros and cons?

A: I would say both are spectacular experiences, but very different ones. I started with a team, but my experience was 17 years at the NBA, kind of at the time when the NBA went from a property that wasn’t particularly well respected to a real global brand, and that was an amazing experience. That said, if you really have what I call the “defective gene” and like being attached to wins and losses and having a team that you’re emotionally invested with, there’s nothing at the league that is the equivalent of that. The league is a very different kind of work experience in that pretty much you’re sure that half the teams are going to win, and half the teams are going to lose every game. That has some real benefits in terms of your ability to predict and plan your business life. But if you really enjoy having the ups and downs of being associated to a single team, there’s really nothing, again, at the league that provides that.

So, I always knew I’d get back to a team at some point in my career. It’s just a very different kind of day-to-day business and employment experience and they’re both great. I have almost evenly split my career between both the league and with teams, so at different times in my life, different things were more attractive to me, but right now I think I have the best job in sports.

Q: That’s the dream: enjoying what you do! So, after you came out publicly, was there anything that happened that maybe you didn’t anticipate beforehand?

A: I don’t know that I really allowed myself to go and start to make my own internal predictions about what might or might not happen, but what has happened has just been overwhelmingly positive and I think that the kind of societal transformation that we’ve seen in the last five years—it’ll be four years in May since [I came out publicly in] that New York Times article—but what’s happened in our country in the last five years now I certainly couldn’t have predicted. I’m not sure anybody could have in terms of the movement on social issues related to the LGBT community. So, its been a remarkable thing to observe and I kind of have an interesting viewpoint because of my involvement in sports. It’s been nothing but positive for me personally and professionally.

Q: I see you’ve recently started a personal Twitter account. You’ve got about 40 tweets up there, so I was wondering what led to jumping on the bandwagon?

A: I’m there screaming and kicking because it definitely is a business tool for our fans, not a personal tool for me. We just decided it would be a helpful additional channel of communication with some of our fans that obviously are living on Twitter these days, so we set it up and I’ve got a little cast of smart people who help manage it.

Q: Both the Rockets and the Warriors had Chinese New Year uniforms this year. How did that come together?

A: For us based in the Bay Area, we have three of the five largest Chinese communities in the country with San Jose, San Francisco and Oakland. We have celebrated the Chinese New Year before—but not with uniforms—the last three years. The Warriors went to China and played two games against the Lakers, not this pre-season but last season’s pre-season in Shanghai and Beijing. I think to me historically it might seem odd that Houston has been a connection point for Chinese fans, but with Yao Ming being the first really successful Chinese player in the NBA there was a natural place for people to focus their interest. But … the Bay Area and the Warriors are a much more natural connection point to NBA basketball, and with the really exploding growth of NBA in China right now, it’s by far our second largest market outside the United States.

We see a great opportunity to help build the NBA brand and the Warriors brand within that, by embracing our Chinese community here, which is an incredibly important part of our fan base, but also to make the Warriors as visible as we possibly can to fans in China who love the NBA.

Q: You’ve been in this business for a long time. Do you feel like you’ve reached the pinnacle of your career? What gets you going in the morning? Do you have anything that you want to accomplish still?

A: Yes. I’m here because of the opportunity to build the first world class, multi-purpose arena in San Francisco’s history. The Warriors are one of the NBA’s original franchises and moved to San Francisco and played in a place called the [Bill Graham] Civic Auditorium that was not really a suitable NBA facility, so the team ended up moving to Oakland. Part of coming here is that there was a vision with our new ownership group that’s been with the team for the past four seasons. We were going to do everything in our power to try to bring the team back to San Francisco and to build that arena that San Francisco’s never had. We’re three years into the process and right now we have a lot of momentum and have plans to open in 2018. That’s all the additional motivation I need to wake up every morning and more often than not lose a lot of sleep every night in terms of trying to navigate the difficulties that are part of San Francisco and trying to get a project of that magnitude done.

Q: The city is about seven-by-seven miles. There’s definitely not a lot of space there.

A: No. We’re lucky enough to be able to buy 12-acres of private property that was owned by Salesforce.com to build their corporate campus. But actually, from the time they bought it to the time they were ready to start building, they outgrew it. So that was our good fortune to be able to move our site from what had been a much more controversial site over the water at Piers 30-32, to a land-based site in Mission Bay, which is just half a mile away from where the baseball Giant’s [AT&T Park] is. We’re in a terrific new part of the city that is going to be an amazing complex when they’re done.

Q: Obviously a lot of people know you as the only openly gay senior executive in major professional American sports. What else would you like to be remembered for in your career?

A: I don’t even know how to rank them. [There are] three things from a career standpoint. Hopefully, it’ll be four things from a career standpoint, the last being a part of what we think is going to be incredibly special: not only an arena, but a 12-acre development we’re building here in San Francisco. There’s been a lot of attempts that have failed over the years, and to finally have that accomplished in San Francisco, that’s a TBD as number four.

But going backwards, I would say maybe the most personally gratifying was the launch of the Women’s National Basketball Association (WNBA). It was something that I think was clearly the right thing at the right time. I’m proud that the leadership of our league was willing to take that on as a very special project for those of us who were working there who really felt the time had come for a major women’s professional basketball league that had all of the financial and organizational support that the WNBA had when it got started. Here we are [19 years later], so its been so much fun to watch. I got to be part of a couple championship seasons with the Phoenix Mercury when I was in Phoenix with the Sun’s organization, which was really a very special thing.

The thing that I get credited with, maybe that I’ll always live with, is the creation of the NBA All-Star Weekend. It wasn’t really as visionary a thing on my resume as people might want to credit me for. I was in the unenviable position of trying to sell the NBA to major corporate sponsors at a time when the NBA was not viewed as a good investment for companies like that. I knew that if we could create some additional events, I’d have a chance at least to try to create some corporate interest in sponsoring those events. That, really as much as anything, was my motivation in trying to create a second day of events around All-Star: that we could bring the fans with the support of some corporate partners, and that really was an important part of launching [NBA Commissioner] David Stern’s success.

If you remember, that weekend in 1984 in Denver was the end of the tenure for Commissioner Larry O’Brien and this young commissioner was pretty much unknown, outside of immediate NBA circles. David Stern was taking office the day after that weekend, and it was really with David’s encouragement that we created a slam dunk contest that was honoring Denver’s American Basketball Association heritage. We decided to do an “All-Timers” game which had been done in baseball but not basketball. It was part of the Stern agenda, as he had laid it out for us once he became commissioner, which was to really get back in touch with the history of the game, something that the NBA had not been a good caretaker of.

He [wanted] to bring the people who really contributed at the beginning and up until that point in time, that really made the league. We had pretty much turned our back to those people as a league organization before, and part of Stern’s agenda was to get back in touch with that, so what we did I think resonated with people in a way far beyond what we could’ve imagined. [Now] I go to All-Star in New York this year and it’s just like [laughs]… it’s hard to imagine what it’s turned into.

I guess the last would be being able to be part of constructing how we got the 1992 [United States men’s Olympic basketball team] “Dream Team,” which was many years in the making. But really, in my view, it will be looked back on as moving the NBA’s international agenda ahead by 20 years. I mean, I couldn’t have imagined a better way to expose the NBA product worldwide and generate interest that continues today in the sport and in the NBA in particular. So, those would be the four I think, but one of them is yet to be accomplished.