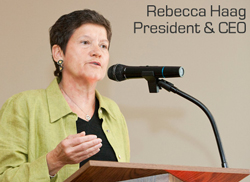 By: Rebecca Haag*/Special for TRT–

Today we are one giant step closer to making it easier to test people for HIV in Massachusetts. Gov. Deval Patrick is set to sign “An Act to Increase Routine Screening for HIV,” which was approved by the Senate in March and the House just a few weeks ago.

This bill modernizes the Commonwealth’s HIV testing laws by replacing the need for written consent before an HIV test can be administered with verbal consent and it makes no changes to current laws relating to patient privacy.

AIDS Action Committee has long supported expanded HIV testing in Massachusetts. With an estimated 25,000 to 27,000 people living with HIV/AIDS in Massachusetts, but approximately 21% of them unaware that they are HIV positive, it’s clear that we need expanded HIV testing of state residents to end the epidemic.  Increased HIV testing will help get those who are HIV positive into care and treatment earlier and will result in better health outcomes and lower health care treatment costs. Earlier testing for HIV will also help prevent the spread of new infections since those who know their status and are in treatment are much less likely to transmit the virus to others.

Massachusetts has long been a national leader in the fight against AIDS. New diagnoses of HIV have declined by 54% since 1999 which will result in $2 billion savings in health care costs. At just 600 new diagnoses annually, we are tantalizingly close to eliminating the spread of HIV in Massachusetts.  But it’s clear that we can’t test our way out of the epidemic.

In 2009, between June 27 and July 29, 2009, we held five town hall-style meetings to solicit feedback from providers, patients, and activists in Boston, Worcester, Springfield, Gloucester, and Brockton around current testing practice.  We learned that stigma around HIV testing prevents some people from getting tested. We learned that some people who are vulnerable to HIV infection fear losing health care insurance if they test HIV positive and so they have not been tested. We also learned that there is a profound lack of confidence in the confidentiality of HIV tests.

Now that the challenge of expanding HIV testing is behind us, we need to work together with the medical and public health communities to find a way to reduce stigma. We also need to ensure that all relevant medical information is securely in the hands of physicians who need it. And as we continue to move toward universal electronic medical records, we need to find ways to address patient concerns about confidentiality and ensure their full participation in the process.

* Rebecca Haag is the President & CEO of AIDS Action Committee of Massachusetts.