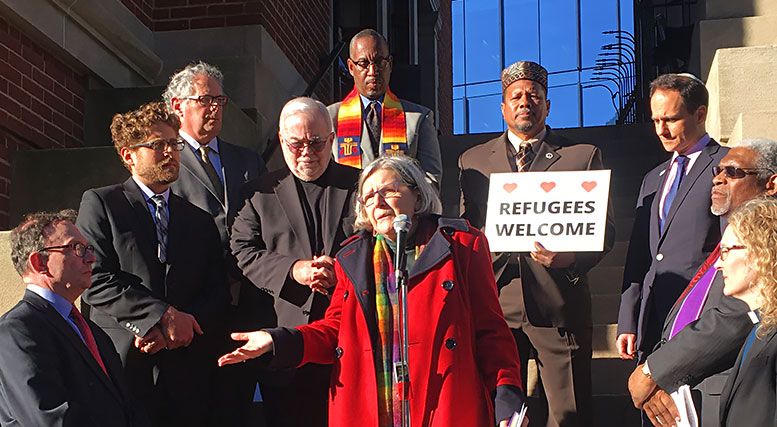 In lieu of the actions taken by the administration, different ministers, pastors, imams and more unite in solidarity for refugees and immigrants

WASHINGTON—Faith leaders from Christian, Muslim, and Jewish traditions gathered outside a church steps from the White House to strongly denounce President Trump’s pending and released Executive Orders severely limiting the ability of refugees and refugees to seek safety and live in the United States. The leaders expressed how their faith traditions demand that they welcome, not reject, immigrants and refugees, who are some of the most vulnerable in the world. Following the press conference, these faith leaders led a procession to the White House and a prayer vigil, which developed into a rally attended by more than one thousand people. Below are some of the insights they shared:

Jim Wallis, President of Sojourners: “Religious liberty doesn’t mean anything to any of us unless it applies to all of us.”

Rabbi Jonah Pesner, Director of Religious Action Center, Union for Reform Judaism: “Our scripture teaches us that we should treat the stranger among us as if he or she were native born because we were strangers in the land of Egypt. If they target Muslims, they target Christians and Jews as well. We stand together.”

Rev. Dr. Earl Trent, Chairman of the Church World Service Board; and Senior Pastor of Florida Avenue Baptist Church: “As African Americans, we are very familiar with efforts to round folks up. Giving police powers to round up immigrants and deport them with no charge will further exacerbate tensions. ‘Sanctuary’ is the place where God promises to meet us. To be against sanctuary, Mr. Trump, is to be against God.”

Rev. Jack Moline, President of Interfaith Alliance: “President Trump’s forthcoming executive order is a de facto Muslim ban. The United States has long prided itself as a safe bastion for refugees around the globe facing persecution and strife. President Trump is poised to trample upon that great legacy in one of his first major acts in office.”

Imam Talib Shareef, Masjid Muhammad: “President Trump says he is pro-life. He should expand that to all human beings.”

Reverend Jennifer Butler, CEO Faith in Public Life: “When one part of our body suffers, we all suffer.”

Sister Simone Campbell, SSS, Executive Director of NETWORK: “People of faith, this is the moment we are called to…We must look at deep truth for why people are fleeing and own our responsibility in that.”

Rev. Jimmie Hawkins, Director, Presbyterian Church USA Office of Public Witness: “People of faith have provided safe place and sanctuary in their places of worship throughout history. Now is the time for the faith community and our nation to assist refugees and asylum seekers, the most vulnerable populations on our planet. We stand in strong opposition to the announcement by the President.”

Rabbi Rabbi Scott Perlo, Sixth & I Historic Synagogue: “To the conservatives in our midst: I’m a Jew. I support Israel. I can understand why bringing in groups of people from geographic areas from which we have had political enemy might give people a moment of pause. But I want to ask: do you really want to make geopolitics a reason for letting families die? Who is coming on those boats? These are people simply hoping to make it out alive.”

Bishop Richard Graham, Metropolitan Washington, DC Synod, Evangelical Lutheran Church in America: “We know what it means here to have come from someplace else and to struggle against the kind of economic hardships and bigotry that all immigrants have to face. We count on our government to make things better for these people, not worse.”

To take action in support of refugees and immigrants, see the CWS action alert at GreaterAs1.org.

Since 1964, Church World Service has supported refugees, immigrants and other displaced individuals, in addition to providing sustainable relief and development solutions to communities that wrestle with hunger and poverty. Learn more about our refugee and immigrant work at GreaterAs1.org.