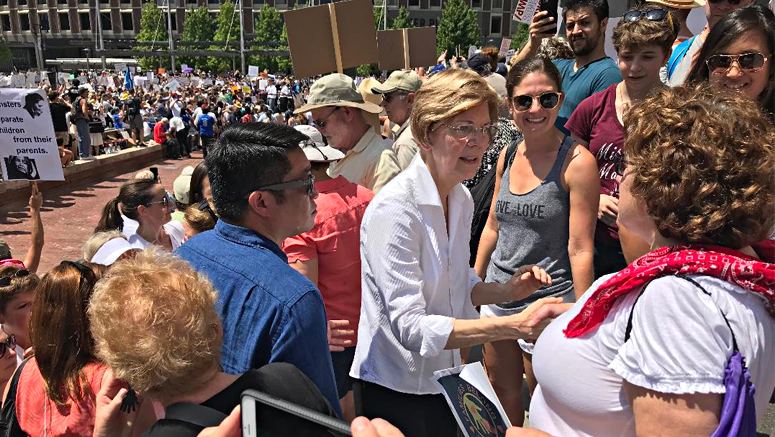 Senator Elizabeth Warren greets protesters of Trump's immigration policy that separated children from their parents at the border. Photo: The Rainbow Times/Lorelei Erisis

BOSTON, Mass.—Thousands of protesters gathered this morning at Boston City Hall Plaza as a part of the National Day of Action, a nation-wide protest to stand against the Trump administration policy of family separation of immigrant workers from their children.

According to the organizers’ Facebook page, they are protesting the “the irreversible trauma that has already been perpetrated on these children and their parents for the crime of seeking a better life,” they wrote.

NY Mayor Bill de Blasio said last week that 350 children had come through a social service agency “center and that 239 of them were currently in Cayuga’s care; the agency is not residential, but places children in temporary foster care and runs day programs,” reported the New York Times.

Yet, no state officials were aware that the children were there or where they were being housed.

“How is it possible that none of us knew that there were 239 kids right here in our own city?” the NY mayor asked, reported the NYT. “How is the federal government holding back that information from the people of this city and holding back the help these kids could need?”

More than 2,300 children have been taken from their parents over the last two months, the NYT found.

In attendance at the Boston protest include Senator Elizabeth Warren and Senator Ed Markey, amongst other high profile politicians, leaders, and activists.