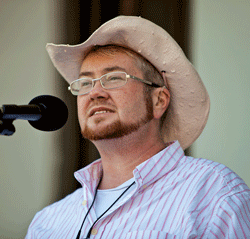 In February, my community was gripped by the unfolding trial of David Fried-Oppenheim, founder of a popular local performing arts center. Fried-Oppenheim, a cisgender man, was charged with multiple counts of child rape, stemming from a sexual relationship that began when the victim, now 20, was only 14. The jury convicted Fried-Oppenheim on all counts, after a week of hearing testimony from numerous witnesses, including a young FTM who also had been involved at the center.

In any case that draws significant media attention, there is likely to be an element of trial by public opinion. Often the accuser ends up being “tried.” In this case, the witness seemed to be on trial for his gender. The witness’s transition was referenced in almost every news story, even when his previous gender was not relevant to the point being made.

More disturbing, though, was the fact that the defense used the witness’s gender identity to cast doubt on his testimony. In one instance, Fried-Oppenheim attempted to make the witness seem less credible by saying that he knew the FTM was in therapy. This was repeated by the media, yet it seems that it was not put into context either in court or in the news. Even if you accept the idea that seeing a therapist means someone is mentally unstable – which I don’t – it’s not that simple for transgender people. Therapy is a required part of the process of transition. Most people who wish to transition will see a therapist, no matter how sane and stable they are.

Additionally, during closing remarks, the defending lawyer reportedly called the FTM witness “a professional at fooling people,” an apparent reference to his gender identity.

It makes sense that the accused, facing such serious charges, will say just about anything to be acquitted. What makes no sense to me is how it is permissible – in a state with nondiscrimination laws that cover gender identity – for a lawyer to make biased statements against transgender people in court, without it being questioned by Judge Rup, who oversaw the case, and without professional reprimand.

“Massachusetts’ gender-identity-nondiscrimination law bans discrimination in employment, housing, education and credit. By its terms, the law does not affect how a lawyer argues his client’s case in court,” explained Cole Thaler, a former transgender-rights attorney for Lambda Legal, who clerked for Judge Rup earlier in his career. “Lawyers are permitted to use certain tactics to try to raise doubts about a witness’ credibility. This is called impeaching the witness. For example, lawyers can impeach with a prior statement from the witness that conflicts with what he says now in court.”

“A lawyer who uses a witness’s transgender identity to try to cast doubt on truthfulness is attempting to arouse the jury’s prejudice in his client’s favor,” said Thaler. “Lawyers have attempted similar tactics in cases where transgender or gay people were victims of crimes, as if that aspect of identity makes the person inherently suspect. In 2006, California enacted the Gwen Araujo Justice for Victims Act specifically in response to that practice. That law amends jury instructions to state that the use of societal bias to influence the proceedings of criminal trials is not allowed.”

To my knowledge, no such law exists in Massachusetts. Yet, I can’t imagine a similar statement being made about any other minority group. Would it be tolerated for a lawyer to say that gays are “professionals at fooling people?” What about African-Americans? Latinos? Jews?

Throughout the trial, daily articles about the case drew prolific comments online. Many seemed to view the gender identity of this one FTM witness as having “confused” the entire case. One comment on the local news site MassLive.com stated that some witnesses seemed to have “deep emotional/mental issues” while another said they didn’t see how the accused could be convicted because the case was “bizarre” – and specifically mentioned “transgenders” as an example of what made it bizarre. In fact, what was bizarre was the defense’s transphobic statements and the disproportional attention to this tangential detail about one witness.

The treatment of the witness’ gender identity in the media and the “court of public opinion” has left me very concerned and angry – for all transgender people and for this witness, in particular, who came forward to do the right thing and testify, despite the disruption to his personal life and the public dissection of his identity. (Not surprisingly, I discovered late in the case that I know the FTM witness – it is a small community, after all.) Even aside from my concern for him personally about what he’s had to endure, this case worries me.

Will other transgender witnesses refuse to testify, knowing how their identities will be treated? Will transgender victims choose to let perpetrators off the hook rather than be tried by public opinion themselves? It is clearly time for Massachusetts to enact its own version of the Gwen Araujo Justice for Victims Act.

And what of the rest of us? In the past few years, the transgender community has made great strides, securing legal rights in Massachusetts and several other states. But it’s clear that we have a long way to go before the court of public opinion affords us the basic rights of dignity and respect.

*Tynan Power is an FTM parent, writer, Muslim and interfaith leader. E-mail him at tynanpower@yahoo.com.

2 Comments on "Fried-Oppenheim Case: When transphobia arrives, we’re all on trial"