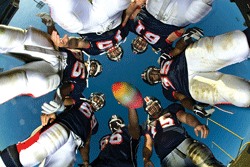 Although billions of dollars were bet on this month’s Super Bowl, the score of the game shouldn’t have mattered to the LGBT community.

Both the New England Patriots and New York Giants were winners.

As the website OutSports noted, the title contenders are among the NFL’s most gay-friendly teams.

Both have long and varied histories of supporting LGBT issues. For example, when the Gay Bowl took place in New York, the Giants sent a lesbian staffer to a panel discussion on being gay in the NFL. A team spokesman told Outsports founder Cyd Zeigler that the Giants were “an all-inclusive family that does not care about sexual orientation.”

Patriots’ owner Robert Kraft is at least as gay-friendly as Tisch. Last year he spoke at an LGBT networking event. The Pats had already become the first NFL team to sponsor a Gay Bowl. They also sent player Andre Tippett to the opening ceremonies to speak on behalf of the team, and make the ceremonial coin toss.

Kraft’s support for gay issues has created an environment of openness and celebration that filters down throughout the entire organization. Player Brett Lockett has appeared in the NOH8 (“No Hate”) campaign against California Proposition 8, and has been a vocal supporter of gay marriage.

(As for Denver Broncos quarterback Tim Tebow, who last year participated in a Super Bowl ad for the anti-gay Focus on the Family group: He got trounced by the Pats.)

But it’s not just Super Bowl participants that – Tebow-types notwithstanding – are moving the NFL forward on gay rights. Baltimore Raven Brendon Ayanbadejo – hey, he played for a team that was in the conference championship too – has been an outspoken supporter of Equality Maryland, the gay marriage effort in that state. And he too stripped down – well, he took off his shirt, which was plenty – to make a NOH8 statement. When a Twitter fan wanted to know his greatest accomplishment, he tweeted back: “marriage equality support & playing in a Super Bowl.”

In a speech at the University of Delaware, Ayanbadejo told students that hearing some negative responses to his own background – his mother is white, his father is Nigerian – impelled him to fight for equal rights for gays.

He added that straight allies are important, and that he has never received backlash from teammates.

Also standing up for the LGBT community: Scott Fujita. In a 30-second “Americans for Marriage Equality” video for the Human Rights Campaign, the Cleveland Browns linebacker said, “I’ve been married for 12 years and I know that it is unfair to keep other loving and committed couples from getting married and protecting their families.”

“It’s just me standing up for equal rights,” he told the New York Times last year, about his earlier advocacy efforts. “It’s not that courageous to have an opinion if you think it’s the right thing and you believe it wholeheartedly.”

Fujita too knows something about prejudice. His adopted father, a Japanese-American, was born during World War II in an internment camp in Arizona.

Fujita began speaking out on gay rights when he learned about laws limiting gay adoption. Such legislation, he said, focuses on sexual orientation, rather than finding safe homes for children. “It’s also saying that we’d rather have kids bounce around from foster home to foster home throughout the course of their childhood, than end up in a permanent home.”

“By and large, the players are more tolerant than they get credit for,” he said. “It’s not a big issue. Some guys will think you are crazy for believing one way, but they’ll still accept you.”

The league itself is also more accepting of gay issues than many people believe. Its collective bargaining agreement protects all players against discrimination based on sexual orientation, and the league office offers same-sex domestic partner benefits.

Former NFL commissioner Paul Tagliabue has been a very public supporter of PFLAG. He spoke at a New York chapter dinner about his love for his gay son, Drew, and Drew’s partner. Tagliabue also made a major contribution to the organization. Last fall he and his wife donated $1 million to his alma mater, Georgetown University, to establish the Tagliabue Initiative for LGBT Life.

What we don’t know, though, is which gay-friendly team – the Patriots or Giants — Tagliabue supported in this year’s Super Bowl.