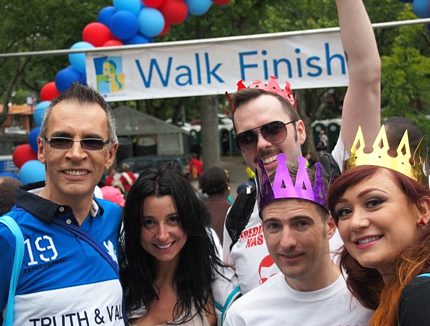 For the last seven years, Michael Fitta has raised money for the AIDS Walk Boston & 5K Run in honor of his older cousin Jack who died of AIDS in 1985. Jack was just 40 years old and living in San Francisco when he succumbed, officially, to pneumonia.

Fitta, 50, was about 22 years old at the time, and just coming to terms with the fact that he was gay. He had long looked up to his older cousin. He did not see him that often, because Jack lived in San Francisco, while Fitta was in Fall River. But when Fitta saw Jack at family gatherings, the two “just clicked,” Fitta says.

Few of Fitta’s relatives in his close knit and conservative Portuguese-Catholic family spoke of Jack after he died. Fitta long suspected that Jack died of AIDS but did not get confirmation of that until many years later when the AIDS Quilt came to Boston. “I got there too late to see the Quilt, but I grabbed a program booklet and I remember standing outside on the sidewalk flipping through it and lo and behold I saw that Jack had two panels in the AIDS Quilt,” Fitta recalls. “That was the first confirmation for me that Jack had indeed died of AIDS and I just stood there and cried my eyes out.” [pullquote]“It takes away the silence and the stigma away from the fact that this man died of AIDS at a time when we understood so little about it.” [/pullquote]

Over the years, as Fitta has talked more and more about why he does the Walk, family members have started talking about Jack, and sharing their photos and remembrances of Jack with Fitta. The fact that the AIDS Walk & 5K Run has basically given Jack a voice is deeply meaningful to Fitta. “It takes away the silence and the stigma away from the fact that this man died of AIDS at a time when we understood so little about it.”

This year, Fitta has joined Team Freddie Mercury to raise money for the AIDS Walk & 5K Run, which takes place on Sunday, June 3. “It’s an incredible fun group of people,” Fitta explains, adding that Freddie Mercury, the first major rock star to die of AIDS, and his band Queen, were hugely popular during the 1980s and capture perfectly the time during which Jack lived as an out gay man.

Indeed, this year’s AIDS Walk & 5K Run comes as public funding for HIV outreach, education, and prevention is waning. Between FY 2000 and FY 2013, the line item in the Massachusetts budget that pays for HIV/AIDS services, prevention and outreach, decreased 38% from $51.7 million to $32.1 million. Between 2000 and 2011 (the last year for which statistics are available), the number of people living HIV/AIDS in Massachusetts increased 44%, placing substantial demands on existing prevention and treatment programs. [pullquote]The 28th annual AIDS Walk & 5K Run takes place Sunday, June 2 and draws 10,000 to 15,000 participants.[/pullquote]

The 28th annual AIDS Walk & 5K Run takes place Sunday, June 2 and draws 10,000 to 15,000 participants. It is AIDS Action’s largest annual fundraiser. The Walk is 6.2-miles long. The 5K Run is a competitive, timed event, and is fully sanctioned by the USA Track & Field Association. The AIDS Walk & 5K Run will begin and end at the DCR Hatch Memorial Shell on the Charles River Esplanade in Boston. Registration and check-in begins at 7:30 a.m. The Walk begins at 10 a.m.; the 5K Run begins at 9:50 a.m. WCVB-TV Eye Opener Newscaster Randy Price will emcee the event, which also includes a Wellness Festival. Participants can register for the AIDS Walk & 5K Run at www.aidswalkboston.org. There is neither a registration fee nor a minimum funds raised requirement in order to participate in the Walk. The 5K Run is $25 to register. AIDS Action expects to raise approximately $1 million from participants.