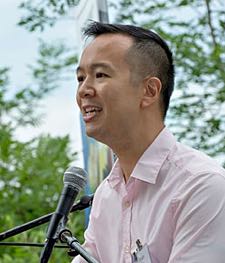 Janson Wu is the new ED of GLAD

Janson Wu is the new ED of GLAD

BOSTON, Mass.—Janson Wu, Deputy Director and Senior Staff Attorney for Gay & Lesbian Advocates & Defenders (GLAD), has been appointed the organization’s new executive director. Wu, who has been with GLAD for eight years, will start his new position on December 1, 2014.

“We are thrilled and proud to name Janson our new executive director at such an important and forward-looking time for the movement and for GLAD,” said Board President Dianne Phillips. “Janson’s set of skills and talents are uniquely suited to this moment.  Beyond his deep knowledge of GLAD, the movement, and the issues facing our community both in New England and nationally, Janson brings to the table vision, impressive leadership abilities, and the strategic thinking of a successful litigator.” The selection was made after a national search conducted by the firm Isaacson, Miller. [pullquote]During the past 8 years at GLAD, he has been deeply involved in the breadth of GLAD’s work with particular emphasis on marriage equality, DOMA, transgender rights, employment benefits, family law and parentage, and the rights of LGBT elders.[/pullquote]

Wu came to GLAD in 2006 as a staff attorney following three years both in a law firm and in legal services. During the past 8 years at GLAD, he has been deeply involved in the breadth of GLAD’s work with particular emphasis on marriage equality, DOMA, transgender rights, employment benefits, family law and parentage, and the rights of LGBT elders. He has served on the legal teams of many of GLAD’s significant cases including the DOMA cases Gill v. Office of Personnel Management and Pedersen v. Office of Personnel Management, and the recent asylum case of Ugandan activist John Abdallah Wambere. This year, he successfully argued before New Hampshire’s highest court that a non-biological lesbian mother should be recognized as a parent (In re Madelyn B.). His efforts have earned national recognition: in 2012, Wu received the David Carliner Award from the American Constitutional Society, and in 2011 he was named one of the Best LGBT Lawyers under 40 by the National LGBT Bar Association. He was a 21st Century Fellow with the Pipeline Project, which is dedicated to cultivating leadership among LGBT people of color.

In addition to his litigation, Wu has been extensively involved in GLAD’s legislative and policy work throughout New England. In New Hampshire and Rhode Island, he led GLAD’s coalition work with local advocacy organizations, legislators and individuals to pass marriage equality, for example. During the past year, Wu has served as GLAD’s Deputy Director, playing an essential role on the leadership team following former executive director Lee Swislow’s retirement.

“With all of the gains that GLAD has brought to New England, we now have a unique and exciting opportunity going forward,” said Wu.  “We are positioned to show the rest of the country what the next stage of our movement could look like if we dream big and keep our eyes on the prize – equal justice under law.  I am both happy and humbled to have this chance to play a leadership role for our community.”

Some of the challenges now facing the LGBT and HIV communities are long-standing, like eradicating HIV, securing legal protections for families regardless of how they are formed, guaranteeing access to health care for the transgender community, and ensuring our movement’s goals and gains are inclusive of and accessible to LGBT people of color. Other important issues include ensuring that the growing number of LGBT elders are not met with discrimination, addressing the needs of LGBT youth for safe schools and safe lives, and fighting the improper use of religion to defeat non-discrimination protections for LGBT people.

“As part of the next generation of leaders in our movement, Janson will bring boundless energy and commitment to all of these tasks,” said GLAD Board Vice President, Richard Yurko.  “Janson understands where we’ve been and also has a vision for the future that will inspire a new generation of activism.”

Wu, who grew up in upstate New York, is a graduate of Harvard College and Harvard Law School.  Following law school, he was an associate in the San Francisco law firm of Quinn Emanuel Urquhart & Sullivan, and then a coordinating attorney with the anti-poverty organization Tri-City Community Action Program.

Wu has served on the Sexual Orientation and Gender Identity/Expression Commission of the American Bar Association and as a member of the legal committee of the World Professional Association for Transgender Health (WPATH).  He has also served on the boards of Marriage Equality Rhode Island (MERI) and Standing Up for New Hampshire Families.  He is past President and Development Chair of Coro Allegro, Boston’s premier LGBT classical chorus.

Janson Wu lives with his husband in Boston.