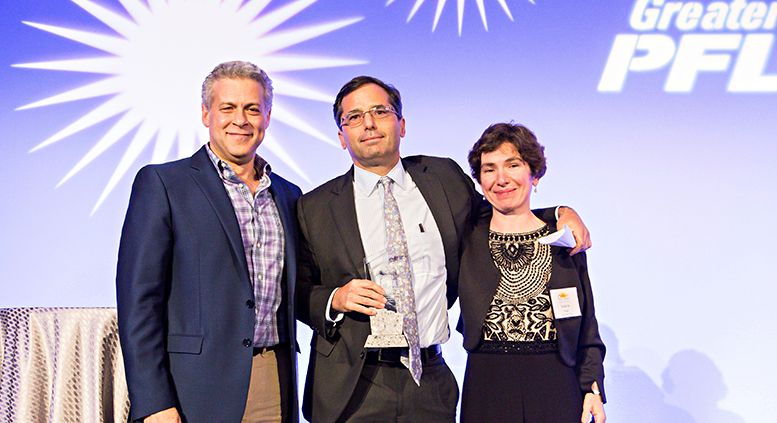 BOSTON—Greater Boston PFLAG (Parents, Families and Friends of Lesbian, Gay, Bisexual, Transgender and Queer people) raised approximately $750,000 to support its work with LGBTQ youth and their families at Pride & Passion 2017, its signature annual benefit and auction. The organization honored Josh Kraft, Nicholas President and CEO of the Boys & Girls Clubs of Boston (BGCB) and President of the New England Patriots Charitable Foundation, at the event with its Cornerstone of Equality Award. Kraft was honored for his long-time commitment to social justice, including his commitment to fostering acceptance and respect for LGBTQ youth.

“As a nonprofit leader, Josh has demonstrated an unwavering commitment to diversity, particularly in creating a community at the Boys and Girls Clubs of Boston in which all kids, including LGBTQ youth, are welcome,” said Val Frias, Greater Boston PFLAG’s Executive Director. “We’re grateful for his leadership.”

Prior to accepting his current role as Nicholas President and CEO of Boys & Girls Clubs in 2008, Kraft was the Founding Executive Director of BGCB’s Gerald and Darlene Jordan Club in Chelsea where, for 15 years, he led the after-school program from the basement of a public housing development, until the current state-of-the-art building could be built. A fierce advocate for inclusivity and teaching respect for all in his mentoring of youth, Kraft constantly strives to ensure the safety and acceptance of LGBTQ youth among staff and membership of BGCB.

Greater Boston PFLAG is dedicated to fostering LGBTQ-inclusive families, schools and communities through support, education and advocacy. Since 1978, Greater Boston PFLAG has provided award-winning, highly effective bullying and violence prevention services. Each year, Greater Boston PFLAG delivers over 200 educational programs statewide, reaching over 18,000 people in middle and high schools, religious organizations, colleges, corporations, and at conferences for healthcare, counseling, and prevention specialists. Greater Boston PFLAG helps change attitudes and creates an environment of understanding so that LGBTQ family members and friends can live in a world that is safe and inclusive.