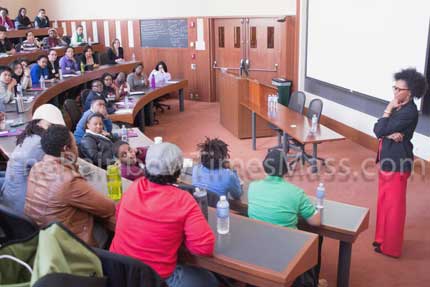 Community gathers to celebrate, strengthen through workshops and dialogue

The Second Annual Lesbians of Color Symposium (LOCS) was held at Harvard Law School in Cambridge Saturday, April 13 as a daylong series of breakout sessions, workshops, panels and networking, hosted by The LOCS Collective, Inc. and Harvard Law School Lambda.

LaTeisha T.J. Johnson, cofounder of the LOCS Collective, Inc. along with Shaunya Thomas and Tikesha Morgan, said the three joined together to create an organization and event to meet the disparities they found in other LGBTQ (lesbian, gay, bisexual, transgender, and queer) organizations throughout Boston.

“We found that a lot of organizations for the LGBT community didn’t necessarily provide the services needed for our community in particular, for lesbians of color or queer women of color, in essence,” said Johnson.

Johnson expressed that one of the major themes of this year’s symposium was gender expression and identity.

“Being a queer woman of color or lesbian of color, oftentimes especially in communities of color — and I’m speaking from my own experience as an African American — we tend to focus a lot on gender expression or gender roles, masculinity and femininity,” Johnson said. “As women who love women, you run into a lot of issues because how you may express your gender may differ entirely from how you may identify in terms of gender.”

Panels throughout the day included Taking Charge: Navigating Sexual Health and LBTQ Identities in Health Care; Sexual Taboo II: Sexual Images and the Relationships We Pursue; The Power of One: Social Justice & Advocacy; Gender Expression and Gender Identity Workshop; Wait…Femme Privelege?!?!; Mainstream Visibility; and Introduction to the Trans Communities. There was also time for attendees to network in a less formal setting.

“There is a need to provide a space for women of color to come together and commune, and not just at a club, but to network and just be around like-minded people, to have genuine conversations,” Johnson said. “To create a space for us, to create a voice for us, and strengthen that voice in the community by doing events like these.”

Although keynote speaker London Bridgez could not attend the symposium at the last minute, other special guests led dialogues, including internationally known African-American lesbian social justice activist Mandy Carter, whose session focused on another major theme of the symposium. [pullquote]“As a queer woman of color, I’ve always been looking for those more colorful spaces within the queer community and I felt such a sense of sameness and also it was a learning process coming here last year,” Cranston-Bates said.[/pullquote]

“In that session, she talks about the necessity and need for advocacy, to be involved in social justice for our community, because no one else is going to do it but us,” said Johnson.

Students from many local universities attended the symposium and said they enjoyed convening in a community that was more diverse than their campuses.

“I just came out, and its very important for me to find that supportive system and be empowered, and that’s something we don’t have at Smith,” said Noemi Linares- Ramirez, a student at Smith College. “I feel very secure and that I finally have the network that I’ve been looking for.”

Misty Cranston-Bates said this was her second year attending the symposium and that it was one of the reasons she wanted to move to Boston.

“As a queer woman of color, I’ve always been looking for those more colorful spaces within the queer community and I felt such a sense of sameness and also it was a learning process coming here last year,” Cranston-Bates said.

Attendee Kaamila Mohamed said that for people who have multiple identities that are marginalized, it is important to join together.

“There are a lot of challenges and oppressions being put upon us,” Mohamed said.  “It’s important to come together in spaces in which we can build community and celebrate who we are and rejoice in who we are in order to gain the skills to lead healthier and positive lives that tap into our full potential as humans.”

“We’re all marginalized and we all have very specific intersectional identities and one thing that I think is really important being here is that we challenge each other among those identities to be more compassionate and more connected and really push each other to break out of those boundaries and out of the stereotypes,” said Laufer. “It’s hard to do when we are constantly thinking about putting parameters on our identities and safeguarding ourselves.”

Johnson shared her thoughts on what she hoped attendees would take away from the symposium.

“What I want most for people to take away from this conference is that we are here, and not only are we here, we have something amazing and beautiful to give and to share, and this conference is to celebrate the beauty of who we are, of our diversity, and to basically strengthen our culture,” Johnson said.

According to Johnson, LOCS hopes to create other events to bring together lesbians and queer women of color in the future.

Warren’s Actions To Value The Work Of Women Of Color, Their Sexual Orientation & Gender Identity