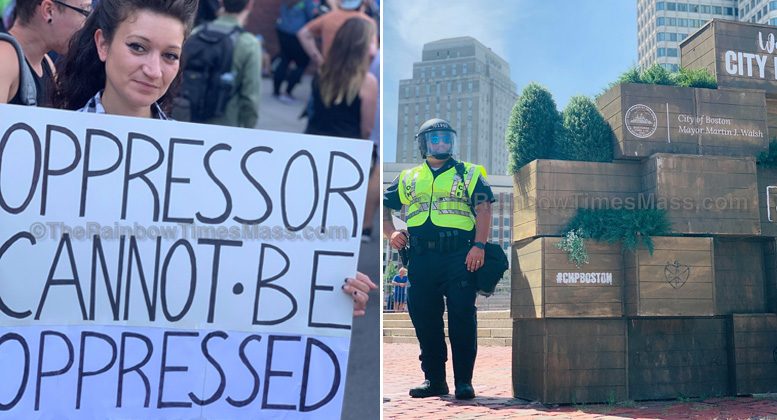 Boston Mayor Marty J. Walsh condemned the parade, according to CNN, and focused on a message about the city’s efforts on behalf of equality and “civil rights.”

As I've said, a "Straight Pride" Parade won't overshadow the tremendous role Boston plays in the national movement for equality. We will continue to be a leader in the fight for civil rights.

But for many, his posts and words were empty ones.

Others even condemned the Mayor’s actions and promised to remember them on election day, alleging that police attacked LGBTQ counterprotesters.

“Your support for the white straight pride event was in the millions. Armed thug Police attacking LGBTQ people on taxpayer dollars. We won’t forget your actions,” read one of the replies to the Mayor via Twitter.

Your support for the white straight pride event was in the millions. Armed thug Police attacking lgbtq people on tax payer dollars. We won't forget your actions.

And according to some footage (below), Boston Police used pepper spray against those protesting the parade.

Shameful Display by the @bostonpolice at #StraightPride

Charging into protestors who were protesting peacefully on the sidewalk, beating, arresting, and pepper spraying.

Make no mistake straight pride is hate pride and cops are here to protect and uphold white supremacy. pic.twitter.com/ey2Rc4uneA

Black and Pink, a Boston LGBTQIA2S+ organization whose mission is to “abolish the criminal punishment system and to liberate LGBTQIA2S+ people/people living with HIV who are affected by that system” said that there was a recognizable pattern of police behavior via a Twitter post.

“This parade follows a rubric,” the post reads. “Small group of fascists receive a huge amount of protection from police. Fs incite counterprotesters. Cops overreact and attack/arrest only antifascists. Our people end up spending hours and $ locked up because #CopsAndKlanGoHandInHand #defendBOS.”

This "parade" follows a rubric. Small group of fascists receive a huge amount of protection from police. Fs incite counterprotesters. Cops overreact and attack/arrest only antifacists. Our people end up spending hours and $ locked up because #CopsAndKlanGoHandInHand #defendBOS

ANTIFA getting arrested at the #StraightPrideParade in Boston!!!

An At-Large City Councilor candidate for Salem, Mass. who attended the counterprotest expressed disbelief at the amount of police force used.

“The most disturbing thing witnessed was the overwhelming show of force by the police, unnecessary, that was much more directed towards the counter-protesters,” said Jeff Cohen, Co-Chair, Salem No Place For Hate. “A much smaller force could have provided the necessary buffer. The best thing was the diversity of the counter-protesters and our shared action.”

Other counter-protester agreed with Cohen regarding how the police handled the counterprotesters v. the parade marchers, who were seen inciting those protesting the event.

“The ‘parade’ was a political campaign for fascism,” said Jenn Nakhai, Therapist, Aeon Counseling & Consulting. “The unnecessary use of force by the police. They seemed to protect the hateful crowd. The crowd inciting violence. Including systemic violence.”

Super Happy Fun America, aka John Hugo, organizer of the Straight Pride Parade, wrote via their website that they organized the event to “achieve inclusivity and spread awareness of issues impacting straights.” Hugo, who has made his anti-LGBQ and Trans statements in the past via social media, wanted his “straight flag” to be flown in City Hall too, according to a Fox News interview in June 2019. 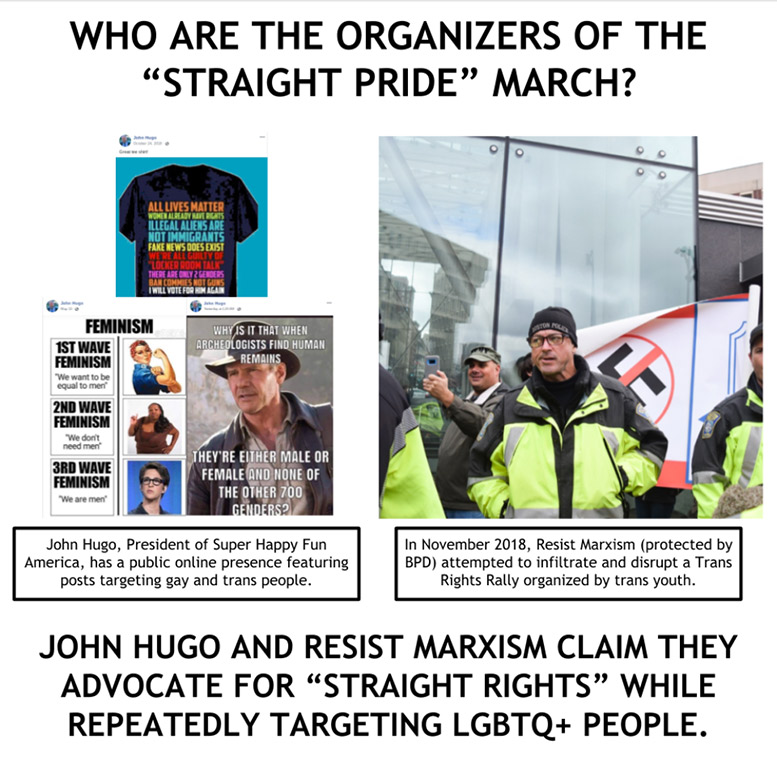 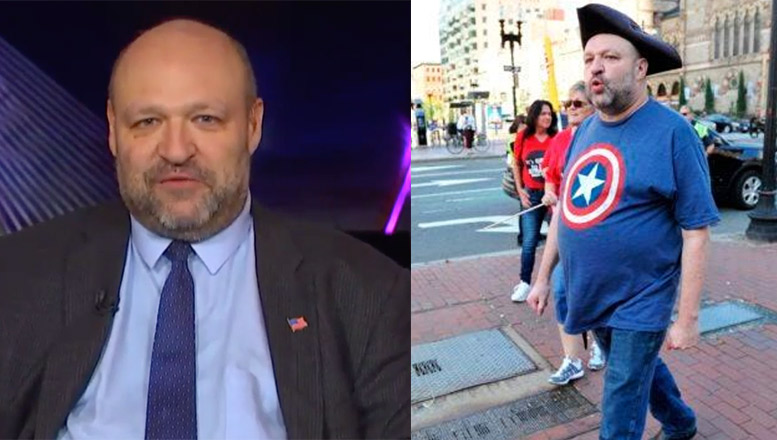 Meanwhile, Rep. Alexandria Ocasio-Cortez (D-N.Y.) referred to the “straight” men behind the parade as men who seemingly had a hard time “attracting women” to the event.

For men who are allegedly so “proud” of being straight, they seem to show real incompetence at attracting women to their event.

Seems more like a “I-Struggle-With-Masculinity” parade to me. 🤷🏽‍♀️

Hope they grow enough over the next year to support / join LGBTQ fam next #Pride! 🏳️‍🌈 https://t.co/DUb52ktWOP

Mostly white straight males, with obscuring attire—MAGA Hats, sunglasses, US FLag bandanas—to “protect” their identity, attended the parade while holding signs in support of Trump’s re-election campaign and held what appeared to be strategic prejudiced signs against oppressed groups. Some of the signs read: “Make Normal Seem Normal Again; Unite America 1st; Flag, Nation, God; Drain The Swamp; Secure America’s Borders; 2020 Trump; In God We Trust; It’s Great To Be Straight; and even one with a drawing of Trump flipping off the crowd.”

“This was clearly a parade rooted in White supremacy and was a blatant Trump 2020 re-election event,” said Noelle Nickerson*, a counterprotester. “It was obvious that the marchers and their message had nothing to do with straight pride and everything to do with ensuring that the majority stays in power.

“The late Mayor Tom Menino would’ve never allowed this act of hate and discrimination to take place on the streets of Boston, much as he did when he stood up against Chik-Fil-A.”

Attendees also reported on many businesses’ responses along the parade route which displayed signs on their establishments that read: “Go Home Alt-Right Scum.”

A lot of businesses along the #StraightPride route have rainbow flags out, or in the case of this building, signs saying "Go home alt-right scum." pic.twitter.com/EfWhrrVL29

The counterprotest effort was spearheaded by Solidarity Against Hate-Boston (SAHB), a coalition of community groups and individuals who have been mobilizing against fascist organizing in Boston since 2017.

According to various news reports, there were approximately a few hundred participants in the Straight Pride Prade and over 1K rose up in counter-protest.

“I don’t really know what ‘straight pride’ is, but I do know that those from ‘Resist Marxism’ and the ‘Proud Boys,’ who were represented [there], believe Trump is their ally, and I agree [that Trump is their ally],” said Cohen from Salem. “If you’re secure in who you are, you don’t need an event like this to prove it.”

The organization released the following statement on Facebook leading up to the demonstration:

“More than an absurd joke, this is an attempt to gain legitimacy for a violently homophobic, transphobic, and misogynistic agenda. The organizers have a long track record of bigotry and support of fascist groups.

“In August 2017, the people of Boston dealt a body blow to the national alt-right by bringing out thousands of people to tell these fascists—many of them the same people as those organizing the ‘Straight Pride Parade’—that we won’t have hate in our city. Let’s turn out again to show them that however they rebrand, we see through their lies and will always come out united against their hate.

“There will likely be a large police line separating us from the fash. Please do not interact with the police. They are not there to protect us; they are there to protect the white nationalists.”

The organization set up a bail fund, in anticipation of police violence as the protest unfolded. However, after exceeding the fundraising goal, it was closed. Yet, Solidarity Against Hate-Boston re-opened the bail fund after the parade and police confrontations and asked others to give at https://bit.ly/32hGCmx.

“Given today’s level of police violence, we have reopened the bail fund,” the Facebook event page read.

Congresswoman Ayana Pressley (MA-07), encouraged others to donate to the bail fund, thanking those who put the counterprotest together.

Join me right now in making a contribution. TY to the allies & accomplices who stood in the gap & laid their bodies on the line today in affront #LGBT hate march. To everyone feeling unseen & vulnerable today…we got you. Equitable outrage. Our destinies & freedoms are tied. https://t.co/xwHQDX7UG2

Nakhai compared the counterprotest to something that yielded results, when the people of Puerto Rico recently ousted former Gov. Ricardo Rosselló.

“The people of Puerto Rico just went through this trauma a few weeks ago. It’s highly traumatizing, yet incredibly empowering,” she said comparing the Straight Pride counterprotest to that of her native PR. “The is no power like knowing your government works for you, not the other way around.”

“It was beautiful to see our trans sisters rise up and fight back. The media manipulates Anti-Fascist movement participators, making them look like criminal outcasts. However; it is the very unity of women, people of color and LGBT++ folks that combined forces to create the anarchistic style of successful protest we need. The Revolution will be Young, Female, Trans and all other intersectionalities of oppressed peoples.”

The Rainbow Times will continue to post updates as they develop.

To view more photos of the counterprotest, check out The Rainbow Times’ Facebook page.

*Noelle Nickerson’s last name has been changed at the request of the interviewee and her desire to remain partially anonymous.