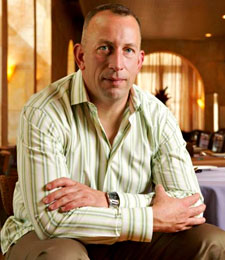 BOSTON, Mass.—Fenway Health is proud to announce that James Morgrage will receive the Congressman Gerry. E. Studds Award. Morgrage has managed Boston’s premier LGBT gathering spot Club Café for the past twenty years and is a strong supporter of LGBT civil rights and HIV/AIDS causes, and a longtime friend of Fenway Health.

Morgrage has been working with AIDS organizations since 1990, beginning as a volunteer at AIDS Response Seacoast in Portsmouth, New Hampshire. While at AIDS Response Seacoast, he regularly drove clients to appointments at Fenway Health’s 7 Haviland Street location. Morgrage is President and Co-Founder of Harbor to the Bay, an annual bike ride from Boston to Provincetown that raises money to support Massachusetts HIV/AIDS programs and services and has ridden each year since the ride started in 2003. Harbor to the Bay returns 100% of the proceeds raised by every rider to its four beneficiaries every year, including Fenway Health.

When asked what his personal commitment is to LGBT civil rights, Morgrage responded, “My personal commitment is that I will work in any capacity that I can to help ensure that marriage equality and equal rights are something that are afforded every LGBT individual across the country. I won’t rest until marriage equality is recognized in all fifty states and all the same benefits and protections afforded our heterosexual counterparts are afforded to all of us.”

The Men’s Event will be held on Saturday, February 28, 2015 from 6 p.m. to 1 a.m. at the Boston Marriott Copley Place. The Men’s Event is a black-tie fundraiser for Fenway Health that brings together more than 1,300 gay, transgender and bisexual men and their friends and supporters for a night of dinner and dancing. This year’s event is made possible thanks to the hard work of event chairs Justin T. Isaac, Brian Ramos, and Joblin C. Younger, Esq., as well as the support of our generous corporate sponsors. More information is available at www.mensevent.org.