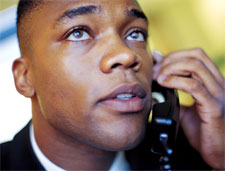 Gay, bisexual, and other men who have sex with men (MSM) currently account for about two-thirds of all new HIV infections in the U.S., and infection rates are particularly high among Black MSM. In a recent study, Emory University researcher Eli Rosenberg and colleagues used CDC data to generate estimates of race-specific HIV transmissions, transmission rates, incidence rates, and rate ratios.

“Our study has clear programmatic and policy implications,” the researchers wrote. “Because disparities in the HIV care continuum likely account for most of the disparities in HIV transmission rates between Black and White MSM, there is an urgent need to improve our rates of HIV testing, linkage and retention in care, and prescription of and adherence to antiretroviral therapy for Black MSM living with HIV.”

Rosenberg and his colleagues also used the model to calculate the projected impact that improved HIV care might have on these disparities. They found that, while “disparities in the rates of HIV transmission could be reduced by improving the outcomes of the HIV care continuum . . . racial disparities in HIV prevalence are likely to continue sustaining the higher incidence in Black MSM for decades to come.”

Obama Administration Will Investigate Insurers for Bias Against HIV and Other Chronic Conditions
According to a recent article in The New York Times, the Obama administration plans to investigate health insurers’ prescription drug coverage and other benefits to determine whether the companies have discriminated against people living with HIV/AIDS or other costly chronic health conditions. The Affordable Care Act requires insurers to accept all applicants for coverage and prohibits them from charging higher premiums based on a person’s pre-existing conditions or disabilities. Advocates have claimed that some insurers have engaged in discriminatory practices by limiting access to benefits for people living with HIV/AIDS and other chronic illnesses. In a letter to insurers, Obama administration officials said that, “If an issuer places most or all drugs that treat a specific condition on the highest-cost tiers, that plan design effectively discriminates against, or discourages enrollment by, individuals who have those chronic conditions.” The Centers for Medicare and Medicaid Services (CMS)―which also administers the Health Insurance Marketplace―said it would focus its investigation on companies in the federal Insurance Marketplace. According to The Times, CMS will try to determine the “estimated out-of-pocket costs associated with standard treatment protocols for specific medical conditions using nationally recognized clinical guidelines.” The specific conditions studied will likely include HIV/AIDS, diabetes, rheumatoid arthritis, bipolar disorder, and schizophrenia.  [pullquote]They found that, while “disparities in the rates of HIV transmission could be reduced by improving the outcomes of the HIV care continuum . . . racial disparities in HIV prevalence are likely to continue sustaining the higher incidence in Black MSM for decades to come.”[/pullquote]

Syphilis Rates Continue To Rise Among Gay, Bisexual, and Other Men Who Have Sex with Men
The rates of primary and secondary syphilis increased 10% in the U.S. during 2013―the second consecutive year with a double-digit increase, according to CDC’s report, 2013 Sexually Transmitted Diseases Surveillance, published last month. The report identifies syphilis ia a major health problem among gay, bisexual and other MSM: “The estimated proportion of … syphilis cases attributable to MSM increased from seven percent in 2000 to 64 percent in 2004.”

“The rate of primary and secondary syphilis in 2013 is the highest recorded rate since 1996,” according to William Smith, executive director of the National Coalition of STD Directors (NCSD). “In addition, the 10 percent increase in syphilis rates in 2013 was the result of increases in men, mainly MSM; no overall increase was seen in women in 2013. Syphilis and HIV co-infection among MSM is also very common, with 52 percent of MSM with primary and secondary syphilis co-infected with HIV.”

FDA Announces Planned Changes in Blood Donation Policy for Gay, Bisexual, and other Men Who Have Sex with Men

“This recommended change is consistent with the recommendation of an independent expert advisory panel―the HHS Advisory Committee on Blood and Tissue Safety and Availability, and will better align the deferral period with that of other men and women at increased risk for HIV infection,” according to FDA. “Additionally, in collaboration with the NIH’s National Heart Lung and Blood Institute, the FDA has already taken steps to implement a national blood surveillance system that will help the agency monitor the effect of a policy change and further help to ensure the continued safety of the blood supply.”

In its announcement, FDA said that it plans to issue a draft guidance about this proposed change in blood donation policy during 2015, and that there will be an opportunity for public comment. “We encourage all stakeholders to take this opportunity to provide any information the agency should consider, and look forward to receiving and reviewing these comments.”

Saturday, February 7, is the 15th annual National Black HIV/AIDS Awareness Day (NBHAAD). As has been the case for the past several years, the theme for NBHAAD in 2015 is: “I am My Brother’s/Sister’s Keeper: FIGHT HIV/AIDS!” According to NBHAAD organizers, the purpose of the event is to encourage Black Americans to:

Below is a list of online resources focusing on HIV/AIDS in the Black/African American community.

HIV/AIDS and African Americans. Web page with detailed statistics from the Office of Minority Health.

Diagnoses of HIV Infection in the United States and Dependent Areas, 2012. This 83-page CDC report includes detailed information about HIV and AIDS cases and deaths among Blacks/African Americans and other racial/ethnic groups. Breakdowns are also provided by age, gender, HIV transmission category, and geographic region.

Black Americans and HIV/AIDS. This three-page fact sheet from the Kaiser Family Foundation was updated last April. It provides detailed information on HIV/AIDS among Black Americans in the following topic areas: snapshot of the epidemic, key trends and current cases, women and young people, gay and bisexual men, HIV transmission, geographic distribution of cases, access to and use of health care, HIV testing, and opinions about HIV/AIDS.

HIV and AIDS Among African Americans. This online document from Avert.org provides an extensive overview of the HIV/AIDS epidemic in Black America, complete with citations to more than 60 source research papers and reports. Topics covered include: key statistics, transmission routes, HIV prevention and treatment, and social and economic factors that contribute to high rates of HIV among African Americans.