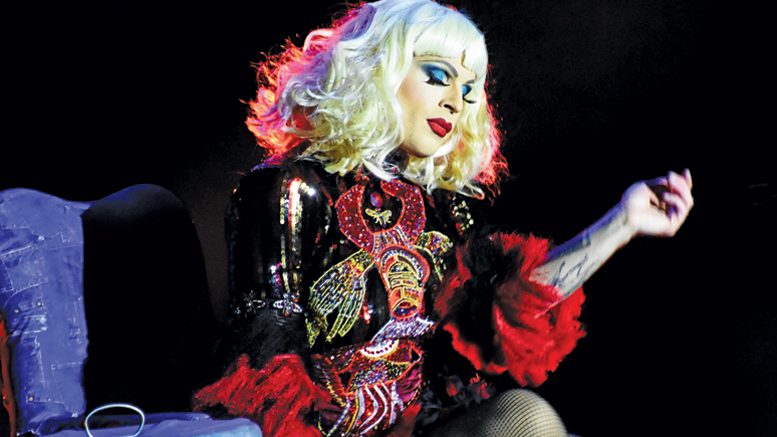 Katya performs at the Wilbur on July 18 and 19. Photo: Amile Turner

Katya is currently on her U.S. and Candian tour, comes home to Boston.

BOSTON—For the first time, RuPaul’s Drag Race star and Boston native Katya Zamolodchikova is heading back to Beantown this month to perform her hilarious drag show as part of her U.S. and Canadian tour.

Well-known for her incredibly amusing drag personas and characters, starring in UNHhhh with Trixie Mattel, and making appearances in productions like Hurricane Bianca, Katya’s show Help Me I’m Dying, lends itself to be a “dragtastic” performance in the city.

Help Me I’m Dying is a multi-media, multi-character, multi-faceted live stage show, according to Five Senses Reeling, the event production and marketing company representing Katya and specializing in LGBTQ and allied artists. This show brings “a fusion of stand-up comedy, story-telling, video, and live dancerly-ish action and music that talks about what it means to be a woman, from the perspective of a person that dresses up like one,” its website read to describe Katya’s show.

The Rainbow Times recently caught up with Katya to chat about her return to Boston, her upcoming show, the world of drag, and what she has learned about womanhood from her drag personas.

TRT: How did you get into drag & comedy? Were you always a performer?

KZ: I started “performing” in my parent’s living room at age 3, putting on little variety shows. I would use a T-shirt as a wig or cut bangs into a cheerleader’s Pom Pom. Very chic.

Q:  Where are you based now and what do you look forward to about coming back to Boston as such a drag icon?

A: I live in LA now, and I’m so excited to come back to Boston and rub my success in the ugly faces of all the jerks who said I’d never make it. Just kidding—nearly every single person I knew back home was super supportive and happy for me.

Q: You won Miss Congeniality on RuPaul’s Drag Race and were an All-Star finalist. Some in the industry have described the drag world as “cut throat.” Is it? If so, what is at your core that allows you to earn you a title like Miss Congeniality?

A: Cut-throat is a strong image. It certainly can be competitive, especially now that everyone and their roommate is doing drag. Before and after Drag Race, I was friendly with everyone, and I’m not competitive, which comes in handy for a high-stakes competition. I don’t actually know how to fight, at least verbally. Physically, I could fight because I took karate for a while, but I’m no good with shady back and forth or dramatic one-liners or even just angrily yelling at someone. I find people who yell and scream to be fascinating. And they are certainly very entertaining—at least on television.

Q: Do you mix politics, drag and comedy? If so, what is your take on the current state of the country?

A: If I don’t have a sophisticated point of view about a certain political issue, then I tend not to share it, and I generally don’t try and pander or preach to the choir because that’s not very interesting. RuPaul has said that every time she bats her false eyelashes, it’s a political act. Same goes for me, when I open my legs.

Q: Your upcoming performance at the Wilbur in Help Me, I’m Dying is a multi-character show. Can you give us a glimpse into your favorite character?

A: I do the Russian character, Trish the Beantown junkie, and then just me in drag. I always love doing Trish because she’s so foolishly optimistic in the face of real hardship.

Q: What do you hope for the future of drag? And, where do you see yourself over the next 5 years?

A: For the future of drag? Hmmmm. I would like to see Courtney Act in a position of political prominence, maybe a senator. Five years from now, I would like to own a home [and] learn how to cook. I’m not really interested in eating or cooking food so I’m looking to change that.

Q: What lessons about “womanhood” has drag taught you? Has it broadened your views on “being a woman” that you may not have otherwise realized because of it?

A: Being a woman is too much work. You have to deal with the pressure of looking good or the guilt of not trying, and the pain, aggravation and most of all—the money. It is expensive to be a woman, especially a glamorous one. And men, most men, are just rotten. And then, you’ve got menstruation—how awful. I wouldn’t last a month. Pregnancy? Forget it! Also, just on a general note: high-heeled shoes are the fruits of the Devil. They are never comfortable, ever. If a woman says that a pair of heels is comfortable all she means is that she can walk in them for 15 minutes without feeling like she stepped into a food processor or [worse].

A: Turgid, tumescent and titillating.

Q: What is something that readers would be surprised to learn about you?

A: That despite me never having gambled and my total lack of interest in all team sports, I still managed to make $10,000 with my fantasy football team last year.

Katya will be performing at the Wilbur Theatre located at 246 Tremont St, Boston, Mass. on July 18 and 19. She will also be taking center stage in Hartford, Conn. on July 23 at the Belding Theater, located at 166 Capitol Ave.

Shows are for all ages but carry a content warning/parental advisory.

For complete show information and details on her U.S. and Canada tour, visit Katyalive.com.