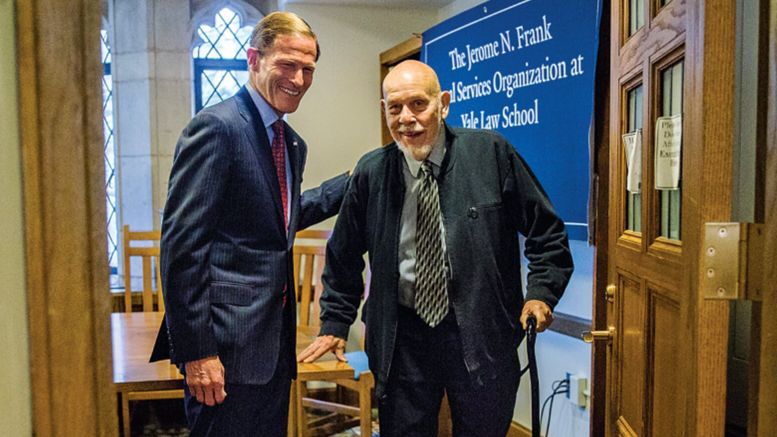 NORWALK, Conn.—Nearly 70 years after being discharged from the United States Air Force for being gay, H. Edward Spires can finally hold his head high when discussing his service to his country.

Spires, 91, had his military discharge upgraded to honorable in January after a three-year legal battle involving multiple organizations.

He is one of hundreds of LGBTQ veterans discharged from the military for being gay who’ve had their discharges upgraded to honorable in recent years. An honorable discharge allows veterans access to military benefits, including education stipends and health care at Veterans Affairs (VA) hospitals around the country.

“It’s about time…the humiliation is gone,” Spires said, speaking from his home in Norwalk while recovering from pneumonia. “It’s been a long haul.”

Spires enlisted in the Air Force in 1946 as a way to avoid being drafted into the U.S. Army after graduating from college. He served as a chaplain’s assistant at Lackland Air Force Base in San Antonio, where he was responsible for maintaining the chapel, playing the organ at services, and typing letters to families. He was promoted to a sergeant after 18 months.

He served two years and two months of a three-year commitment before he was accused of dressing in drag at an off-base Halloween party, which lead to questioning about his sexuality. Spires underwent a two-week interrogation and was threatened with a court martial before being dishonorably discharged in March 1948.

Spires, an Ohio native, returned home embarrassed and ashamed and destroyed much of the evidence that he was ever in the military. He eventually moved to New York City, where he met husband and longtime partner David Rosenberg in 1958.

“It was pretty hairy when Ed was first called and asked about being gay,” Rosenberg said. “There was a lot of fear of his family finding out why he left the service.”

After building successful careers and settling in Connecticut, Spires and Rosenberg married in 2008 and began pursuing the discharge upgrade in 2014. The application was rejected because the Air Force contended that it could not verify that Spires had served in the military.

In early 2016, Spires sought help from Lori Gum, an LGBTQ advocate and program coordinator at Stonewall Columbus in Columbus, Ohio. Gum gained national attention for helping another veteran receive a discharge upgrade and received a cold call from Spires and Rosenberg one day asking if she could help them do the same thing.

“I’ve been saying 2017 can’t be too bad because Ed Spires got his honorable discharge,” Gum said.

The repeal of Don’t Ask, Don’t Tell, DADT, in 2011 opened the door for LGBTQ veterans to submit requests for honorable discharges. Washington, D.C.-based OutServe-Servicemembers Legal Defense Network (SLDN) has processed about 400 such requests since 2011 with about 75 more in process, according to Executive Director Matt Thorn.

The process for most upgrades is pretty straightforward, Thorn said, but older veterans like Spires face an added hurdle because their records were destroyed in a 1973 fire at the National Personnel Records Center in St. Louis.

That’s where people like Thorn and Gum need to get creative. They use things like National Archives records and affidavits from fellow servicemembers to prove military service.

With Gum’s help, Spires’ application was resubmitted in March 2016, but appeared to be heading in the same direction as the first one. Reaching the bottom of her toolkit, Gum enlisted the help of Connecticut Senator Richard Blumenthal and the Yale Veterans Affairs Legal Clinic.

The clinic filed a lawsuit against the Air Force in November 2016. The suit is still open but no further legal action is planned at this time, according to Erin Baldwin, an attorney and member of the clinic.

“Looking at those types of records it was clear to us that he was discharged for being gay and that he was entitled to the upgrade,” Baldwin said. “There was only one conclusion to draw [as] it was a matter of trying to get [the] correct result [for] him.”

Outserve-SLDN has a small team working on discharge upgrade appeals and a network of attorneys who do pro bono work on cases as needed. The entire process can take anywhere from six to 18 months to complete, Thorn said.

Thorn encouraged other LGBTQ veterans to complete the discharge upgrade form  on the Outserve-SLDN website to begin the process for themselves if they are eligible.

“Whether they use us or someone else, this service is available,” Thorn said. “Some people are just fine not doing anything with it and we respect that decision. But for those [who] want it for employment or VA benefits, there are resources out there to get it done.”

Over the course of the application process, Gum said she sometimes feels like she’s playing the part of psychiatrist as veterans relive their experiences of being discharged.

“Sometimes you are really ripping the scabs off of a lot of wounds,” Gum said. “These vets in some cases haven’t talked to anyone about these experiences for 20 or 30 or 40 or 50 years.”

Rosenberg said he’s relieved that Spires finally has closure on this issue after seeing the pride he had for his service and his country.